Don’t Speak for My Military Family: A Veteran’s wife on Colin Kaepernick and the Nike Boycott 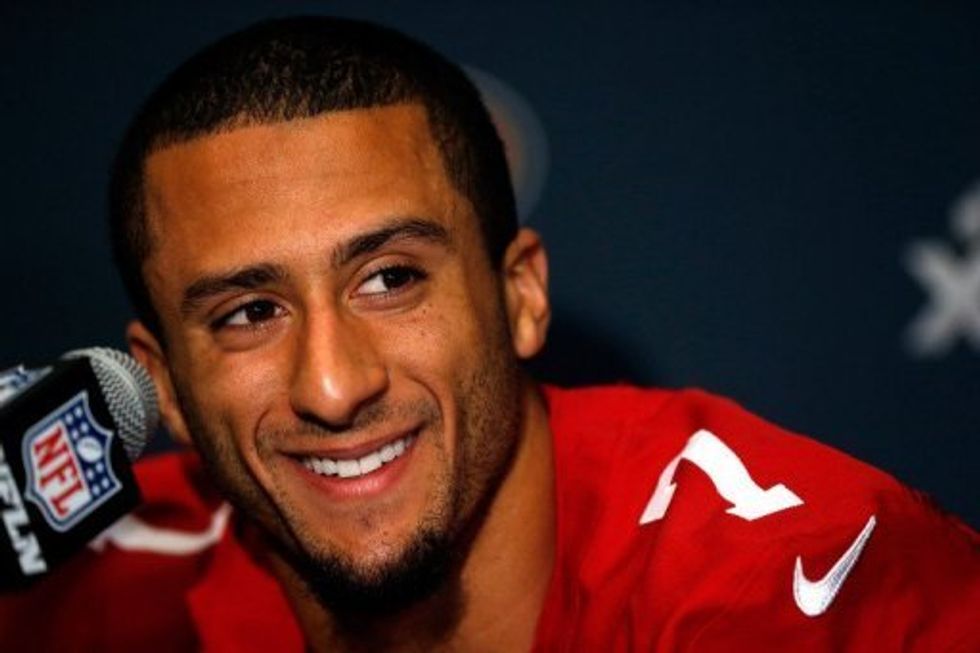 Within minutes of Nike announcing Colin Kaepernick as the model for the 30th anniversary of the athletic wear company’s “Just Do It” ad campaign, the photos began popping up on social media of incensed consumers showing Nike shorts and socks with the company’s trademark swooshes cut out, soon followed by people setting their Nike sneakers ablaze. This fiat-by-flame-and-scissor appeared to be enacted by those who think athletes have nothing to complain about, and who mistakenly view the take-a-knee movement as unpatriotic, a refutation of the “Star Spangled Banner,” the flag and the troops. If you’re going to be willfully incorrect in your presumptions, maybe hacking a hole in your clothes makes sense. Just do it, I guess.

As a veteran's wife, it’s galling to me that taking a knee continues to be miscast as "protesting the anthem" or "disrespecting the military" when Kaepernick and the other athletes who have followed suit have been clear that they are protesting the brutalization of Black Americans. And the military, in defending and upholding the Constitution, protects that right to protest. When you protest Kaepernick’s protest, even in the name of “supporting the troops,” you are refuting everything my husband fought for: life, liberty, the pursuit of happiness, and the peaceful pursuit of justice.

I know no one expects to hear this — or much of anything — from a veteran’s wife. Silence is in the military's cultural agar, and you would be hard-pressed to find a more politically circumspect population than the tight-knit community of spouses. Unlike active-duty troops and reservists, civilian family members aren’t bound by Uniform Code of Military Justice proscriptions around expressing a political opinion or partisan stance. Still, in the interest of preserving cohesion, interpersonal harmony, and focus on mission readiness, we tend to keep it friendly by keeping schtum. The military social sphere, both in-person and online, is an occasionally awkward but largely peaceable milieu, the climate of which might best be described as strenuously neutral.

But I’m finding silence to be an increasingly untenable social default these days. As a normally taciturn veteran’s spouse, my own outspokenness mirrors a larger shift in public discourse: When the political direction of this country grows ever-more ominous, do the old rules still apply? When White House Press Secretary Sarah Huckabee Sanders was politely asked to leave the Red Hen Restaurant in Lexington, Virginia, pundits burst forth with calls for “civility,” which, given the stream of offenses tumbling from the lips of our President, has largely been received as a partisan way of saying, “Don’t agree with us? Do shut up.” As the Trump administration goes lower — we're talking children in cages here — do we still continue to go high? Is it time to raise our voices, even when we’ve been conditioned as military spouses to keep the peace?

Troops and military family members are prohibited from displaying political campaign signage or flags on government quarters. But while we tend to keep our political affiliations close to the vest, political leanings can be signaled subtly: a bumper sticker here, a TV tuned Fox or MSNBC there. Kirstin, a blonde and lithe Captain’s wife who could be passably convincing as either a Daughter of the Confederacy or a Lululemon model, dropped her kids off at our military daycare center one day wearing a shirt that said, “Nah.—Rosa Parks”. This sartorial nod to racial justice bumped her from my nodding acquaintance to friend.

A fashion statement can indeed be a political statement, as exhibited when First Lady Melania Trump visited an immigrant detention center wearing a khaki Zara parka sporting the message, “I really don’t care. Do u?” If the First Lady — the spouse of the very top of the military chain of command and historically the ultimate model of decorum — can justify wearing an offensive jacket telling the world that she really doesn’t care, then surely military spouses can justify taking off the gloves when it comes to telling the world that we really, truly do.

We are living in a different America now, and we who have built our families around those sworn to defend it are proof positive of a shift in the conversational weather.  We have found ourselves at a turning point, where Falstaff’s admonishment that “discretion is the better part of valor” butts up against Dr. Martin Luther King’s “there comes a time when silence is betrayal,” and morally weighting the latter. Perhaps what this reflects, more than anything, is that we care enough to privilege patriotism over the tradition of propriety.

After all, when we stay silent, others are happy to speak for us. Military families are cloistered on posts and bases and underrepresented in the media, so we are particularly vulnerable to stereotyping. Counter-protesters sharing photos of themselves burning their shoes and cutting up their socks in our names could be seen as speaking for us, and who will correct them? Less than 8 percent of living Americans have ever served in the military, and only .4 percent of the current population is active duty, so the potential for misrepresentation is considerable.

Since marrying a soldier 15 years ago, I’ve learned that military families are resilient, adaptable, dedicated and, above all, good sports. But there is a limit to how far we will bend, especially when it comes to how our image and our duties are represented. As members of the military, our spouses, our children, and in some cases our own selves, sign up in support of this great democracy. We will not be insulted in service to cheap emotional and political manipulation. Even the widow of Arizona Cardinal Pat Tillman stated that Tillman himself would take a knee, and would oppose the use of his image to drum up clicks and controversy in objection to the Kaepernick ad. Know this: In all our glorious diversity, one common trait military spouses share is bone-deep devotion to country and to family—ours and others’.

Corporations like Nike are motivated by profit, and I’m skeptical about making big business an altar of worship or a moral guidepost. That doesn’t make Nike’s support of Kaepernick, which they had to know could provoke a backlash, any less decent.

To the athletes taking a knee — and the team personnel and companies that support them — you are true patriots, and I thank you.

As to those who think they’re doing me a favor by objecting to Colin Kaepernick’s peaceful protest — his right that, as a military spouse, I signed on to support my husband in defending — thanks, but no thanks. If you’re inclined to literally rend your garments over Nike’s ads, I’ve got some advice for you: Keep your socks on.