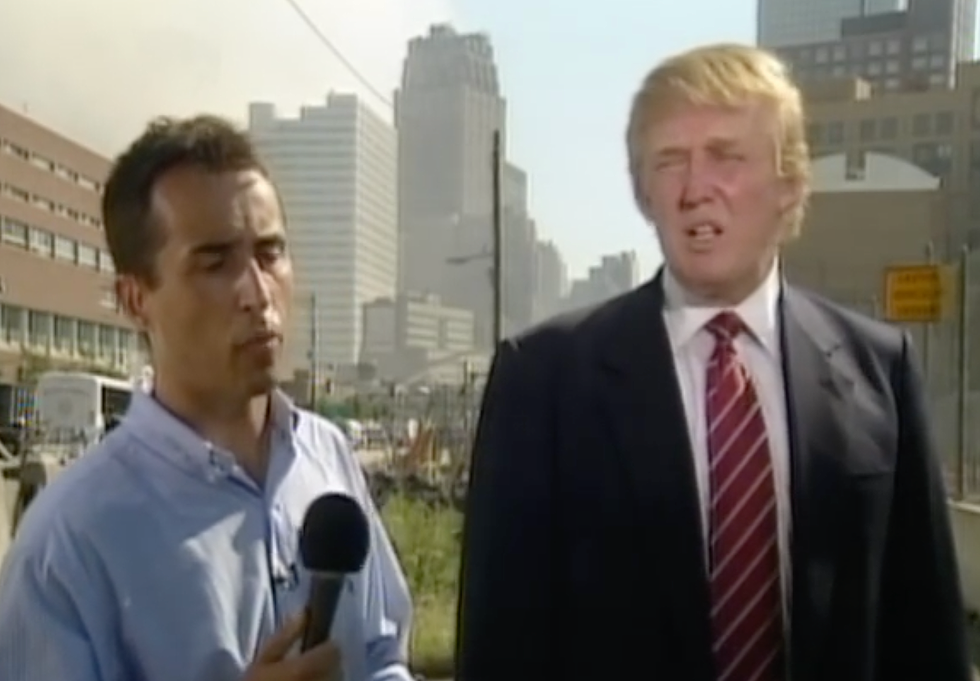 President Donald Trump horrified social media users with a breezy note marking the 17th anniversary of the 9/11 terrorist attacks, but he’s got a long history of strange and inappropriate behavior on that occasion.

Trump spent much of this anniversary morning complaining about the Russia investigation, but he made a couple of passing comments about the Sept. 11, 2001, attacks before heading off to a memorial ceremony — where he again behaved strangely.

The president pumped his fists and bared his upper teeth upon arrival at Shanksville, Pennsylvania, where he was scheduled to take part in a ceremony remembering the passengers who lost their lives after the crash of hijacked United Airlines Flight 92.

Before departing for the crash site memorial, Trump retweeted his social media director with the hashtags “never forget” and “September 11,” praised his attorney and former New York City mayor Rudy Giuliani, and faintly marked the 17th anniversary of the attacks.

Trump raised eyebrows shortly after terrorists crashed hijacked planes into the World Trade Center, when he inaccurately boasted that one of his properties had become the tallest building in New York after the Twin Towers fell.

Trump also boasted 10 years after the attacks that he had foreseen them, a claim he repeated during a 2015 appearance on Alex Jones’ radio show, but his 2000 book made only a passing reference to the widely known Osama bin Laden.

I predicted the 9/11 attack on America in my book "The America We Deserve" and the collapse of Iraq in @TimeToGetTough.

Trump infamously wished his best on Sept. 11, 2013, to all the “haters and losers,” a greeting he’s used dozens of times over the years on Twitter to mark various occasions.

“@realDonaldTrump: I would like to extend my best wishes to all, even the haters and losers, on this special date, September 11th.”

Trump has repeatedly insisted — on Twitter and at campaign rallies — that he saw mass celebrations of the 9/11 attacks by Muslims in the U.S., although there is no evidence of such an event.

“I watched when the World Trade Center came tumbling down, and I watched in Jersey City, New Jersey, where thousands and thousands of people were cheering as that building was coming down,” then-candidate Trump said during a rally in Birmingham, Alabama.

Trump gave a lengthy interview to a German TV crew four blocks from the World Trade Center site, just a few days after the attacks, where he claimed that hundreds of his employees were assisting with the cleanup.

“I’ve never seen anything like it,” Trump said. “The devastation. The human life that’s been just wasted, for no reason whatsoever. It is a terrible scene. It is a terrible sight. But New Yorkers are very strong and resilient, and they’ll rebuild quickly.”

Trump also claimed in February 2016 that he lost “hundreds of friends in 9/11,” although he’s never cited any by name.

Trump boasted after his first 100 days in the White House that his “ratings” on cable and broadcast news programs were higher than coverage of the 9/11 attacks.