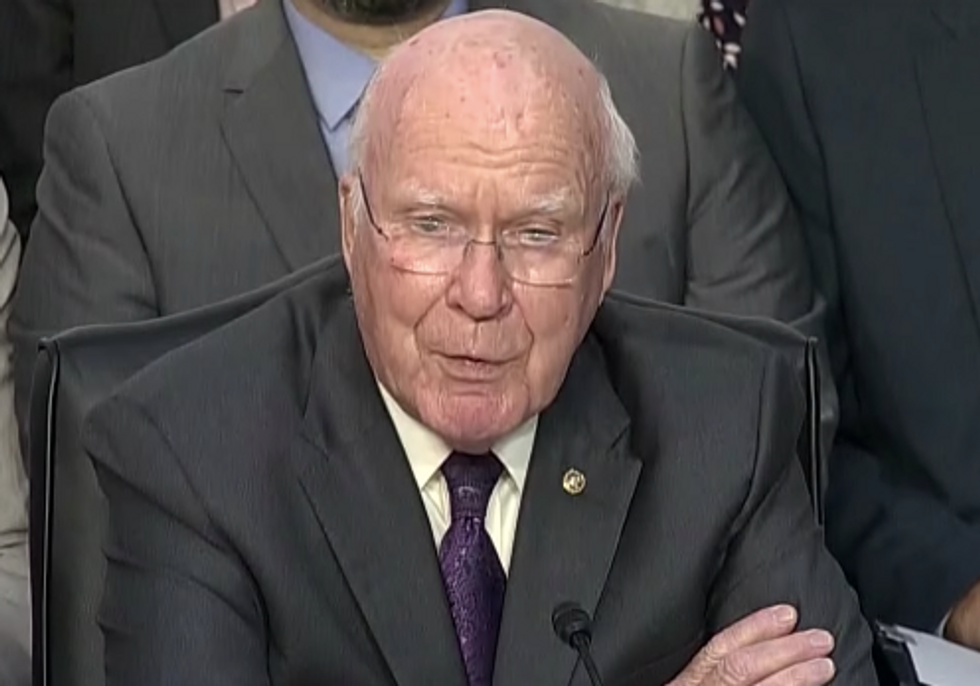 Senate Judiciary Committee Democrats continued their protest at the beginning of the confirmation hearing for Supreme Court nominee Brett Kavanaugh, pointing out again and again that Republicans are hiding as much as 90 percent of Kavanaugh's documents.

Republican Chairman Chuck Grassley out-and-out lied about the document release, saying that they were making as much available for Kavanaugh as Democrats did for Justice Elena Kagan, an assertion destroyed by Democratic Sen. Patrick Leahy, who corrected the record with the facts: 99 percent of the White House's Kagan records were made public 12 days before the hearings began, as opposed to the Kavanaugh debacle, where just 4 percent of documents have been made public and 40,000+ were released just hours before.

Leahy also pointed out in the hearing and in a tweet that among the documents that were released, there are tens of thousands of duplicates of inconsequential documents: "We're hearing 'We've received thousands of documents.' Let's look a little closer. What we got includes event invitations like this, duplicated MORE THAN 44,000 TIMES. The American people need to see #JudgeKavanaugh's full record. #WhatAreTheyHiding?"

So what are they hiding? Something that the Trump Justice Department wants to keep under wraps. And who made that decision has also been secret. No one, "not the Justice Department, the White House, nor Burck—provided on-the-record comment over the weekend about who made those decisions, beyond what was contained in Burck's letter." That would be William Burck, the Bush lawyer put in charge of document vetting. He's also legal counsel for Trumpists like Steve Bannon, as well as other  current and former Trump White House figures who are involved in the Russia probe.

That raised some key questions from Illinois Sen. Dick Durbin: "By what authority is this man holding back hundreds of thousands of documents from the American people? Who is he? Who is paying him?" The answer is that all the Republicans are paying him, and they're paying him to steal the Supreme Court for Trump.

Democrats' attempts to either adjourn or postpone the hearings fell on Grassley's deaf ears, and Democrats weren't willing to go the extra step and walk out.