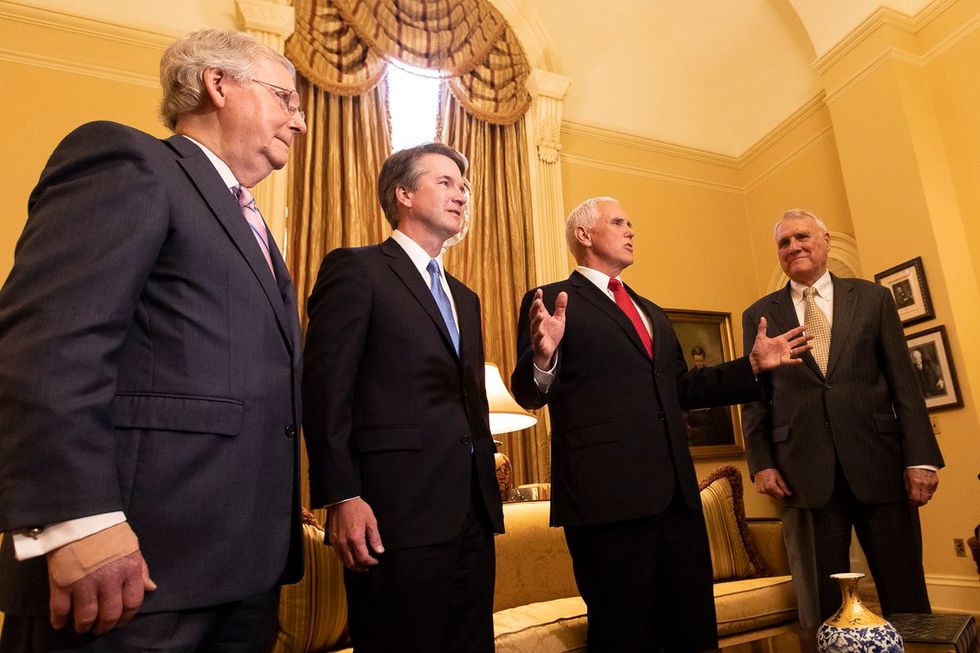 Under Democratic pressure, Republicans have given almost 200,000 pages of Brett Kavanaugh documents to the Senate Judiciary Committee, but they have not released them to the public. These documents cover, at a minimum, his long period of service in the Bush administration. Whatever else is contained in them is unknown.

Democratic Sens. Cory Booker, Mazie Hirono, and Dick Durbin have selectively released a few of those documents. They show that Supreme Court nominee Brett Kavanaugh was less than honest when he said publicly that Roe v. Wade was "settled law." It's clear from the documents he privately thinks Roe can be overturned, and likely that it should be.

The documents released also show he lied under oath during his confirmation hearings for the D.C. Circuit Court "and did so repeatedly." That in itself is quite a revelation. In normal times a Supreme Court nominee who lies under oath would be automatically disqualified. These are not normal times.

As damning as these revelations are, however, what they’ve released are just a small part of what Democrats possess. Almost 200,000 pages are in their hands. Democrats have these pages; the press and public do not.

If they are truly serious about preventing Kavanaugh’s confirmation, Democrats will release all of this material en masse, and do it now — including the apparent #MeToo letter now held by Senator Feinstein of California. Such a release will not only help to fully inform the public about this critical nomination, but it will also put Republicans under pressure, forcing them to be reactive for a change, not proactive, and leaving them no good choices.

To explain, let’s start with the schedule. The Judiciary Committee has finished hearings and started deliberations. The Supreme Court opens its fall session on October 1, and committee chair Chuck Grassley wants Kavanaugh confirmed by then or "soon after." He expects a committee vote on September 20 and a floor vote the following week.

This gives Democrats little time to derail a nomination that will arguably change the course of the Court for a generation and radically transform our government in the process. According to Bloomberg, confirming Judge Kavanaugh "could create the most conservative Supreme Court since the 1930s." In context, that means before 1937 when a highly conservative Court struck down almost all New Deal legislation it reviewed. Bloomberg, in other words, anticipates a return to an anti-New Deal judicial era.

The key to stopping the nomination is in the documents. Republicans withheld them precisely because they are afraid of what they contain. These documents were released only to the committee, only after Democrats insisted on seeing them, only after Chuck Schumer, who may have paid a very high price, bargained for them, and even then, delivered just "hours before the hearing," making careful examination next to impossible.

What's in those documents clearly frightens Republicans. Releasing them would change the game.

First, a full and sudden document release will create a furor in the press, refocusing the public on the nomination.

Second, a full release will "crowd-source" the research into what they contain. Two hundred thousand pages is a lot to go through, far more than committee Democrats can hope to do on this tight schedule. It's unlikely Democratic senators, even today, know all that they contain. If Republican have reason to be afraid of their release, that search will not go unrewarded. Prior to being confirmed for the D.C. Circuit, Kavanaugh worked for Ken Starr, was a principal author of the Starr Report, then loyally toiled in the Bush administration through 2006, ending as White House Staff Secretary. If even a part of that history is covered in these documents, they contain a wealth of information — not just about his perjuries, but about years of activity by a man widely considered a far-right ideologue to the core.

Third, if these documents do contain bombs, public rejection of his confirmation will build continuously. If those bombs are sufficiently explosive, if the public is sufficiently shocked by this nominee’s behavior — if Kavanaugh did more than repeatedly perjure himself, but also has a significant gambling addiction problem, for example — he could become repugnant to the mass of voters just as the Senate sits down to confirm him.

If so, Republicans will be faced with a problem, and a tough but simple choice — to brute-force the nomination through the Senate anyway (they do have the votes), or to withdraw his name in favor of someone else, a person who cannot possibly be confirmed before the November election.

If Republicans do force the confirmation anyway, in spite of what these now-hidden documents reveal, they will have achieved a right-wing Holy Grail — complete and unstoppable control of the U.S. Supreme Court far into the next generation.

But to get it they risk a lot. An electoral backlash could start immediately, further influencing the 2018 election, and could last through the 2020 presidential election as well. Already a minority, Republicans would not just be seen as the party of Trump, whom only Republicans like, but as the nakedly brute-force party — an arrogant uncaring elite eager to shove hated decisions down the throat of a public that, let’s not forget, voted in bipartisan numbers in 2016 for anyone they thought would overthrow arrogant elites. Voters were in high revolt in that election. They have not grown more complacent.

Make no mistake, a Roberts-Gorsuch-Kavanaugh court, as radical as their rulings are certain to be, will force an electoral backlash anyway — and once voters realize what’s been done to them, it will be of tsunami proportions. But do Koch-captured Republican office holders want that tsunami to arrive quickly and forcefully starting in November, or to play out much more slowly, preserving their control of government? A tough choice indeed.

Republicans will be forced to make that choice if committee Democrats release all documents they're now holding. It's by far their strongest next move. It doesn’t even require a consensus to make that decision, or any unanimity at all — a single Democratic senator, acting bravely and alone, can do it today.

It's been argued by many that adding Kavanaugh to the Court would be the final brick in the radical right-wing wall — the "one ring to bind them" if you will. If his nomination is not stopped, the nation could cross a constitutional line to a darkness it may never return from. If Democrats don't put up the strongest possible resistance, using every weapon they have, an electoral darkness may descend on them as well, since they will be — and be seen to be — complicit in the damage to come.

Democrats, release those documents now, and let the public help you help us all.