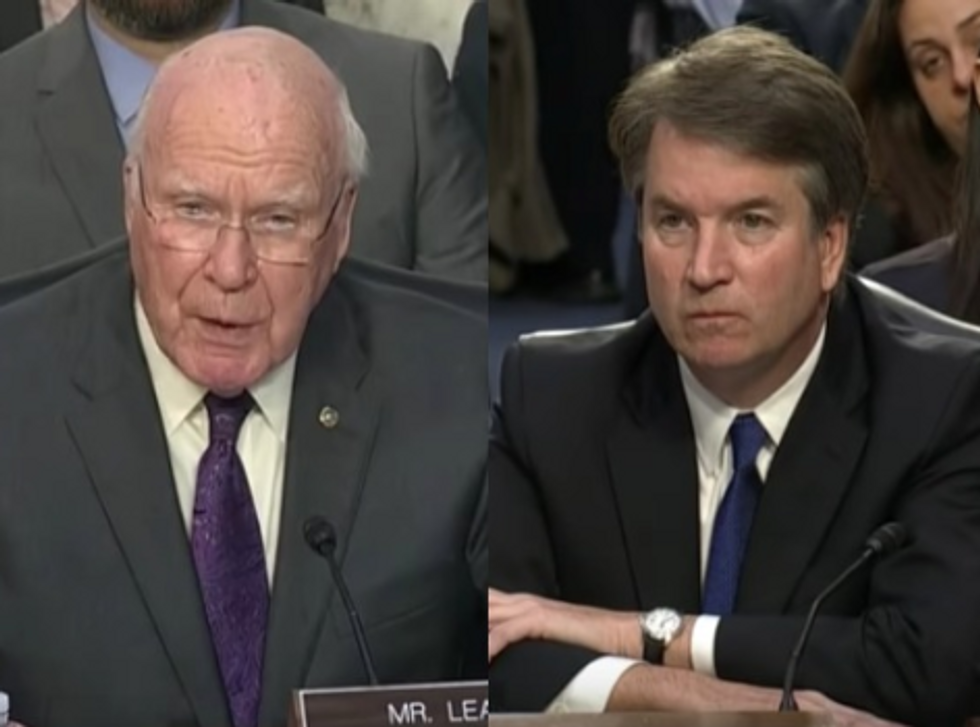 Sen. Patrick Leahy (D-VT) used those reams of hidden and confidential documents related to Supreme Court nominee's Brett Kavanaugh tenure with the George W. Bush administration to the best use he could Wednesday. The line of questioning goes back to 2004, when a senior staffer for then Senate Majority Leader Bill Frist stole emails and memos from Judiciary Committee senators, including Leahy about their opposition to Bush's judicial nominees.

The staffer, Manuel Miranda, shared the memos with Republican senators and with the White House where at the time, Kavanaugh was shepherding judicial nominees through the confirmation process. Leahy pressed Kavanaugh, who initially insisted that he didn't know the information he received from Miranda was stolen. This was a line of questioning for which Kavanaugh was clearly not prepared. Leahy pressed him, asking whether Kavanaugh though it was "at all unusual to receive a draft letter from Democratic senators to each other before any mention of it was made public?"

Here's where we get to the potential perjury Kavanaugh committed before the Senate Judiciary Committee previously. There is apparently evidence in the materials that Grassley has marked "Committee Confidential" that would show it. Leahy says so: "I'm concerned because there is evidence that Mr. Miranda provided you with materials that were stolen from me. And that would contradict your prior testimony... there is no reason [those emails] can't be made public."

Leahy argued then with an enraged Grassley over his request to make public the Bush-era emails that Leahy is all but shouting well contain that evidence. "There are at least 6 documents that are marked committee confidential" related to this, Leahy said.

Those documents, judging by the remainder of Leahy's questioning, relate to potential perjury from Kavanaugh on warrantless wiretapping and torture.

Grassley and team—which includes Kavanaugh himself and the Trump administration and the Bush team—are obviously hiding something. They may very well be hiding the fact that Kavanaugh lied to the Senate in 2006.