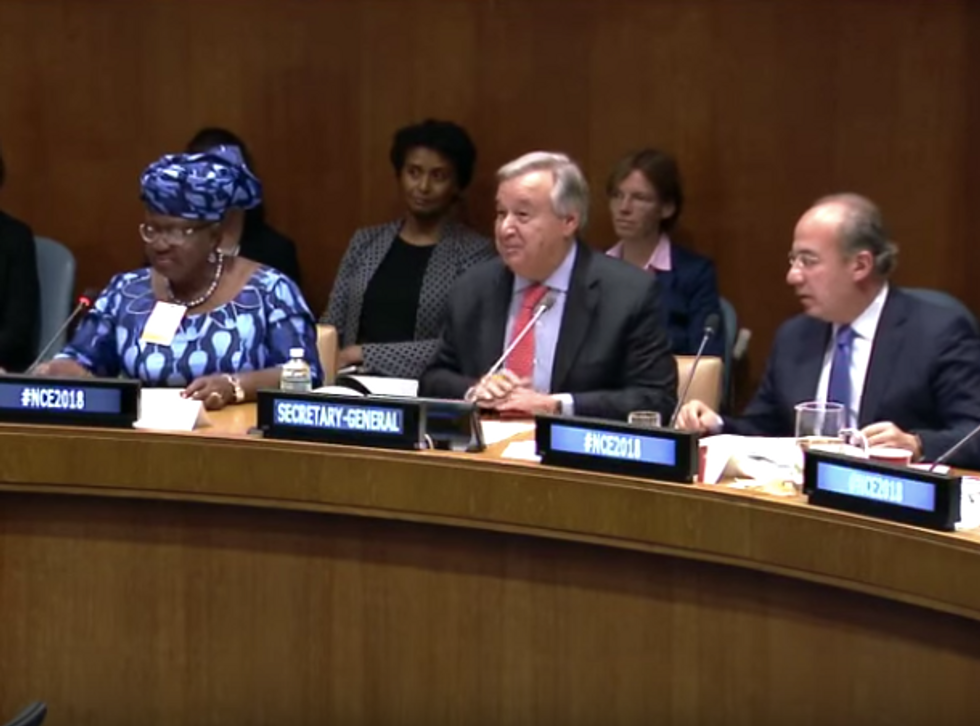 Killer floods and heat waves have made 2018 another record-setting year as the climate crisis intensifies. The UN climate negotiations in Bangkok (September 4-8), followed by the Global Climate Action Summit (GCAS) in San Francisco (September 12-14) and the UN Framework Convention on Climate Change 24th Conference of the Parties (COP24) in Katowice, Poland, (December) could make 2018 the year that world governments chart a path toward tackling climate change, enhanced ambition and implementation of the Paris Agreement. It could also be the time that global leaders fall dangerously short in reckoning with the climate crisis, condemning millions more to losing their lives and livelihoods.

Despite consensus that climate change is jeopardizing life on Earth, there is a massive chasm between the action needed and what the fossil fuel industry—with governments in the Global North in its pocket—is pushing. If polluting countries and corporations are successful, ineffectual interventions—like carbon markets and geo-engineering—become central to the global response to climate change. The result: soaring emissions, lives lost, hundreds of millions of people displaced and species extinction.

This is the path we are on. We are here because of decades of mass deception and political manipulation by big polluters that has allowed them to undermine international, national and subnational climate policy to guard their profits. This political interference is directly correlated with the emergence of carbon market schemes as a "solution" to today's crisis, despite their consistent failure.

Carbon pricing—putting a price on carbon and regulating it through markets including cap and trade and offsets (i.e., commodifying the air we breathe)—have been pushed by corporations and Global North countries as our fail-safe for the planet.

Carbon markets have not proven to be an effective way to reduce emissions. Instead of the Global North making emission reductions domestically, corporations located in the Global South can sell offset credits to corporations in the north to meet their emissions reduction limits. Human rights and environmental injustices are well-documented by communities who live near these so-called clean development projects in the Global South. Instead of holding northern economies accountable to change their production systems and consumption patterns, carbon markets allow for business as usual in the north, leaving the Global South to offset the Global North's emissions and endure the impacts.

Such schemes are criticized for being rooted in the colonialism and environmental racism that is at the core of fossil fuel extraction. Indigenous peoples, small-scale farmers, forest peoples, youth, communities of color and women are most impacted by these schemes. For example: Kenya Forest Service guards have violently evicted the Sengwer Indigenous people in the Embobut Forest due to pressures from voluntary international offset schemes that provide financial incentives for forest preservation. In Colombia, Indigenous Wayuu fight for the ancestral rights to land and water due to impacts from the largest open-pit coal mine in Latin America, Cerrejon. Cerrejon has used the Clean Development Mechanism—which lets countries in the Global North purchase credits from Global South countries to continue polluting—to sell offset credits from a few wind power generators placed next to the looming mines.

In addition to the examples above, these schemes have failed in the very countries whose governments are pushing them, including the UK, the EU, Canada, Australia, and California in the US. Despite the documented global failures of carbon market schemes, big polluters are seeking to make these schemes the centerpiece of climate policy at upcoming milestones in Bangkok, San Francisco and Katowice. At GCAS, polluters are promoting an expansion of carbon pricing mechanisms that guarantee more fossil fuel extraction, despite needing to keep the vast majority of fossil fuel reserves in the ground to curb temperature rise. At COP24, the guidelines for Paris Agreement implementation are being used to link up international carbon markets. This creates an official space for polluters to continue polluting unregulated.

These upcoming meetings will chart the immediate future of climate action. Real, just solutions must receive the priority they deserve. We call on governments to listen to the people without delay at COP24, reject false solutions stemming from GCAS and to take urgent steps to protect our lives. Instead of permitting the very actors that fuelled the climate crisis to advance their own agenda, it is time governments embody true climate championship by embracing the meaningful solutions communities on the front lines of climate change already have. They are feasible and affordable, and they work. They include a managed decline of fossil fuel production; pacts to keep fossil fuels in the ground in the Global North immediately, with a phaseout for the Global South; finance and technology transfer; a total and just transition to community-led renewable energy; and a singular focus on keeping big polluters out of climate policymaking.

This article was produced by Earth | Food | Life, a project of the Independent Media Institute, and originally published by Buzzflash at Truthout. Reprinted with permission.