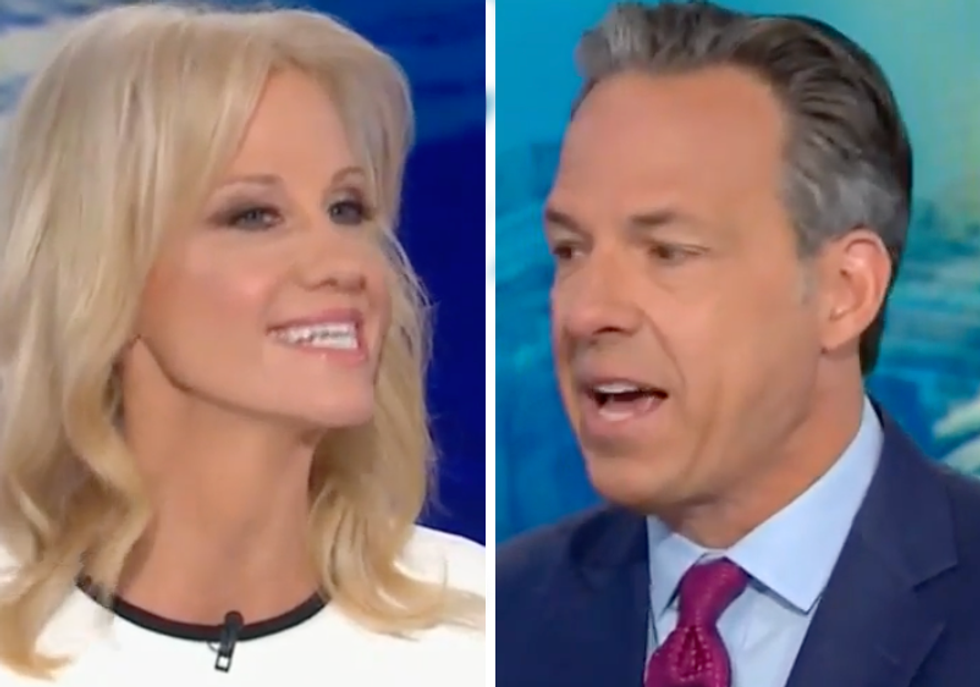 CNN’s Jake Tapper on Sunday cornered counselor to the president Kellyanne Conway over the White House’s handling of an anonymous New York Times op-ed by a senior Trump administration official.

Thursday, the Times published an anonymous op-ed essay claiming “many of the senior officials in [Trump’s] own administration are working diligently from within to frustrate parts of his agenda and his worst inclinations.” Speaking with Tapper on Sunday, Conway tried to dismiss the source of the op-ed and deflected when asked if it says something about Trump that “people around him think this way.”

Conway asked if CNN would “feel comfortable grant being anonymity to somebody who is a mid-level staffer,” before claiming “people in the media” say the source of the op-ed may not be a senior staffer.

“I don't know who it is. If it's somebody significant then I think that then printing it is responsible,” Tapper replied. “If it's somebody completely irrelevant and perilous—“

“I can tell you as an anchor that I gave the story more attention after Vice President [Mike] Pence and Secretary of State [Mike] Pompeo and the entire Cabinet came out and gave the op-ed credibility,” Tapper said. “It never even crossed my mind. I told this to you privately. It never crossed my mind it was Vice President Pence until Pence was out there saying it wasn't him. He and the administration gave this op-ed credibility.”

Tapper later asked Conway about Trump’s claim Attorney General Jeff Sessions should be “investigating” the author of the anonymous op-ed.

“From what I understand, there can be an investigation if there is criminal activity perhaps,” Conway replied.

“There doesn't appear to be in any,” Tapper said.

“I don't know that and I don't think you do,” the White House aide shot back.

Tapper asked about the alleged “criminal activity,” explaining that no national secrets were divulged in the op-ed.

“Anybody who would do this you don't know what else they are saying,” Conway said. “There is a difference between administrative action I understand it and criminal action.”

“That's not how investigations are done,” Tapper later explained. “You don't look at somebody's behavior and say if somebody about this which is not illegal maybe they would have done this.”

“Don't look at the op-ed and say this is everything we know,” Conway said.