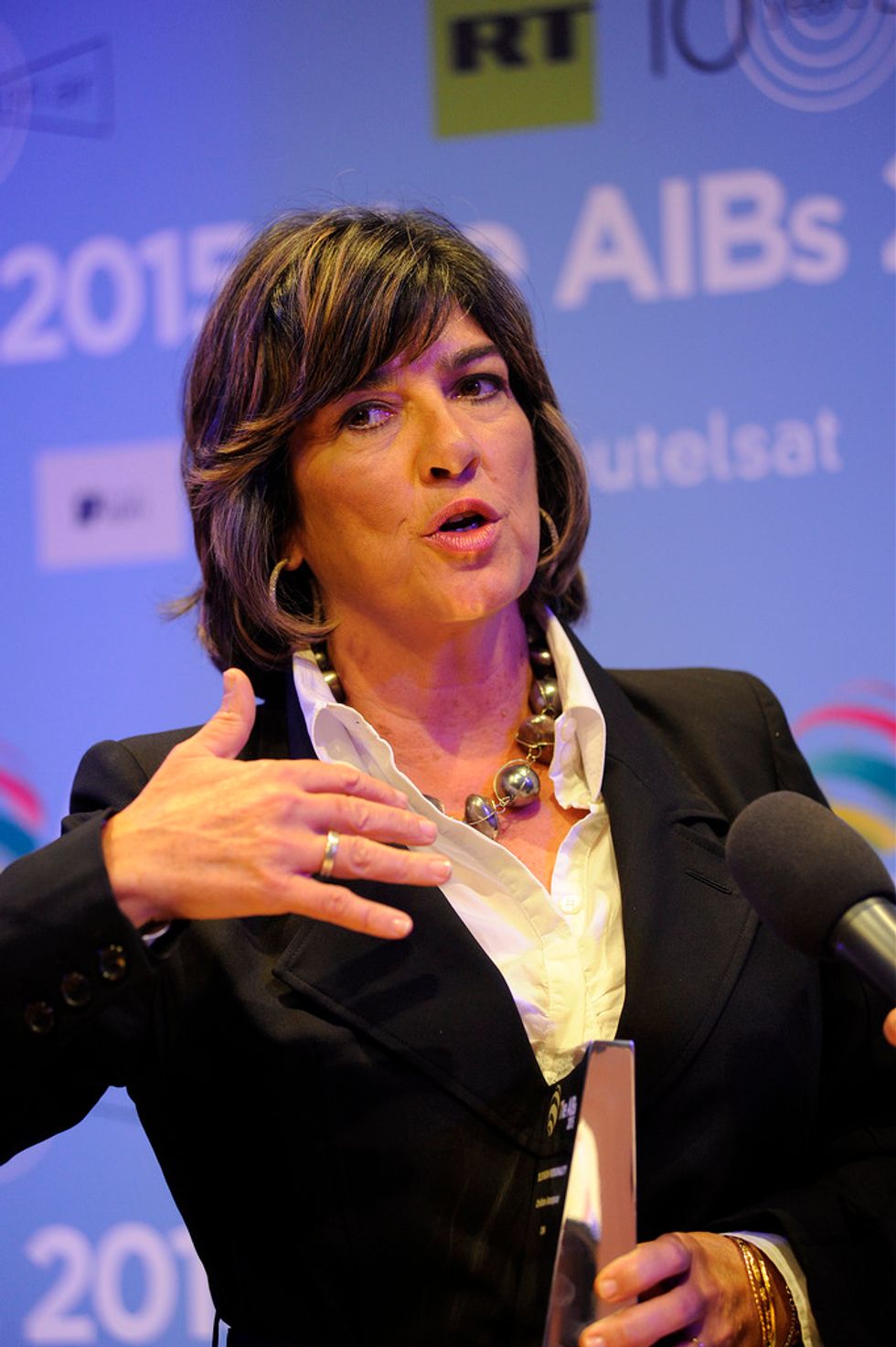 The world is full of stories,” mused Christiane Amanpour. The renowned international journalist who has spent her career constructing an unassailable legacy as one of journalism's toughest, most incisive figures should know — and over the course of a conversation conducted a month ago, she casually and eloquently lets me know that she does.

Amanpour, CNN’s chief international correspondent, has been a fixture in TV news since 1983, reporting from the ground of the Iran-Iraq War at the dawn of her long career. Since then she’s circled the globe, coming to us live from conflict zones where most would fear to tread, from the Persian Gulf to Somalia to Bosnia. She has interviewed Academy Award winners, presidential candidates and despots. She even has the odd distinction of having Palestinian leader Yasser Arafat hang up on her in the middle of a live interview.

As PBS’s “Amanpour and Company” prepares to launch Monday on member stations, the elevation of the show's eponymous primary host is at least tangentially related to a story still percolating in the headlines.

In May PBS selected Amanpour to replace Charlie Rose, whose long-running interview program ceased production in November 2017 in the wake of multiple accusations of sexual harassment. PBS began running Amanpour’s CNN International program in Rose’s slot not long afterward, but made its partnership with the longtime foreign correspondent official in the spring.

And in doing so, the public television service is making a statement to the media world at large about where it stands in a landscape still grappling not only with #MeToo but with the impact of systemic sexism on women’s careers.

ter spending much of a decade as a correspondent for “60 Minutes” under its founder Don Hewitt, earning a Peabody Award for her work, she cut ties with the program in 2005 following Jeff Fager’s ascension to executive producer. (Fager also faces multiple accusations of enabling or engaging in harassment during his time at “60 Minutes,” the result of a damning New Yorker report published in July.)

Far above and beyond that history, though, she’s also a surgically meticulous interviewer. Half-hour episodes of “Amanpour” drill down on one or two subjects, interviewed either via satellite from the journalist’s home-base in London or, when the story or its focus allows, face to face and in the field.

A viewer can learn more about international politics, social constructs and history from spending less than 30 minutes with Amanpour as she chats with the likes of Doris Kearns Goodwin or Trevor Noah than one might take away from standing in the shallow rapids of debate-driven news programs or punditry masquerading as public affairs.

Rebranding her program as “Amanpour and Company” expands Amanpour’s platform to a full hour weeknights at 11 p.m., with a bonus airing at 10 p.m. on Monday to mark the launch, and also incorporates expertise from an assortment of contributors.  As a co-production between WNET and CNN, the show will continue to air on CNN International weekdays. Production will have a dual base of operations, with studios in New York and London.

Amanpour’s “Company,” as it were, consists of author and historian Walter Isaacson; Alicia Menendez, a contributing editor at Bustle; NPR’s Michel Martin, familiar as the weekend host of NPR’s “All Things Considered”; and Hari Sreenivasan, a correspondent with PBS NewsHour. “They all come with a remarkable diversity of age, ethnicity and experience. And I think that's very cool,” Amanpour said.

And it is the antithesis of what Amanpour refers to as “faces in boxes,” a favorite format of cable news.

“I'm a reporter at heart. I'm not an anchor,” Amanpour said. “I've spent my whole career in the field. And I genuinely view my role as an anchor, almost like sort of drawing on all my experience in the field, bringing that into the studio and into the conversation.”

Amanpour has long been skilled at achieving a palpable intimacy in her conversations, even in interviews conducted over satellite with subjects beaming in from halfway across the globe.

“I've spent my whole career being intimate over a long distance,” she observed. “Since taking over the Charlie Rose slot in December, I've been doing these expanded interviews, and the required amount of intimacy by satellite, I think that I'm able to do it because that's how I grew up in this business. While I do love the face to face, and I think that brings a whole other level of not just intimacy but connection, I think it's still highly doable this way.”

To sit down with Amanpour is to enter into a circle of engagement that’s at once invigorating and, in no small sense, intimidating. But there are few people who can speak with authority and passion about the state of journalism and in defense of the longform conversation afforded by public affairs programming such as hers.

Salon spoke to her about this, as well as the overall state of journalism in the modern era. This interview has been lightly edited for length and clarity.

Let’s talk about the idea of doing these very in-depth, one-on-one interviews in an era where there’s so much consumption of news delivered en masse and quickly. Of course, viewers to come to PBS news programming expecting get that deeper context. But at the same time, it must be interesting to be in this landscape where you’re doing a deep exploration of important content that, in the stream, could get swept away completely.

That is a very real, potential pitfall. However, I've been kind of gratified to know from PBS executives who measure these things that the show so far has been very successful. In other words, it fills a hunger for viewers. And that's really gratifying , because when you start something like this — and as I said, I started the half-hour version in December — you never quite know. I'm used to the CNN audience, and I have tweaked it a bit . . . But again, I come at it from a different and more international perspective.

Also, to your specific question, I think that people want longer. People want something to sink their teeth in now and it is a reaction to the craziness. I mean, we’re getting everything coming at us.

And it’s very specific. We’re given one line about what’s going on in Washington, or a soundbite about the economy. Or there may be one story the top outlets drill down on. And so much is being missed.

That’s what I wanted to follow up on. Obvious you must feel the obligation to explore the top news of the week or the day —

One hundred percent. We do every day.

You could describe this moment as being a moment that's drowning in chatter, right? So much chatter.  It's coming at you from the cable, from the radio, from the social media. There's just so much that no human brain can take it all in. It's so discombobulating.

For instance, there the example of the president fighting back with the NATO allies. Yeah. So that's all what you will see [in headlines]. But on the ground American and NATO allied militaries and political echelons are all working together just fine.

In trade, for instance — and I'm not an economic or trade expert — but I really am interested in what happens when, you know, the president and the Chinese leaders and the Europeans were all talking about tariffs and [trade] wars and this and that. What does it mean to the everyday person?

For me, one of the most heartbreaking stories of recent times has been the separation of children from their families. And I think a lot more needs to be done on following those children. It's like "follow the money" if you're doing an investigative story: follow the children. Follow those children. What is happening to those children, and to the parents? I think you can get so bogged down with just the headlines around it, that you fail to focus on the humanity of it.

All my reporting in the field, whether I started in the first Gulf War, in Bosnia, or Haiti, Rwanda . . . Afghanistan, Iraq, Iran, all these places. I've always focused on people. So for me, I'm not a wonk and I don't think the value added of a show like this is just wonkery. I think you take, you know, the context and then you try to either hold the players accountable or get the explanation from the best experts in the field or — and — focus on the humanity and how it affects the individual human beings. That's really important.

There've been so many conversations about the assault on journalism, and really going after television journalism — particularly CNN — but newspapers as well.

Yes. People have characterized this as being either the best of times or the worst of times for journalism. Where do you stand in that argument?

I would say it is the worst of times first, and then the best of times. It's an unprecedented assault on the press. Although previous presidents have assaulted the press when they don't like what the press is doing.

With this much vigor?

This is different because it's a constant barrage and it's magnified by social media. When you start being called "the enemies of the people," that's a line where you have to stand up and resist. Because we are obviously not. We are obviously the friends of the people, we are the servants of the people, the explainers of the people. We are the people who get up and go to those distant lands where it's too dangerous or too expensive or too difficult or too time-consuming for the people to go to, for our viewers, our readers, our online users.

I'm now going to use a phrase that is not my original phrase, because a colleague wrote this in The European: we need to implement our own Article 5, like in NATO — an attack on one is an attack on all. Sometimes we make mistakes. Sometimes we do need to be corrected. Sometimes we must apologize for doing something wrong or making mistakes, etc. But to be unfairly, politically and small-mindedly be attacked like this, if one of us is singled out unfairly we all need to stand up for each other.