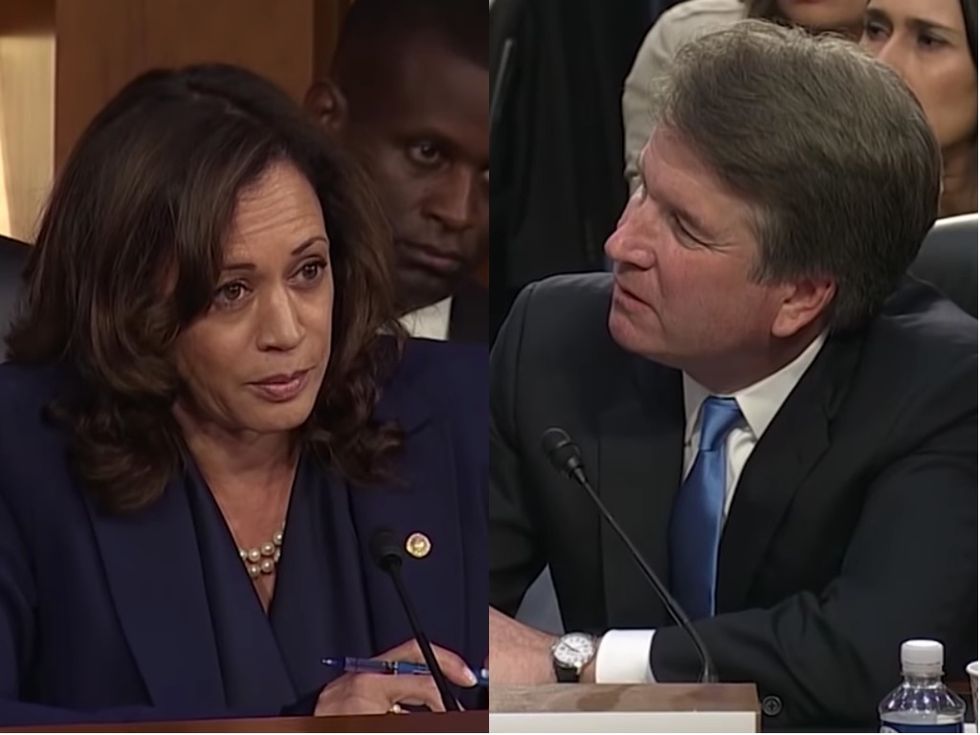 In the Supreme Court confirmation hearings for Judge Brett Kavanaugh, Sen. Kamala Harris (D-CA) has put him in the hot seat again and again and again. She rendered him speechless by challenging him to name one law that impacts the male body as much as abortion laws affect women. And she put him in the hot seat by demanding to know whether he had discussed Special Counsel Robert Mueller's Russia investigation with people at the law firm founded by President Donald Trump's former personal lawyer.

But Kavanaugh still felt it prudent to talk down to her rather than engage her questions honestly. And nowhere was that more apparent than when she asked him a simple yes or no question about the seminal same-sex marriage decision Obergefell v. Hodges.

"In Obergefell, as you know, the Court held that same-sex couples have a right to marry," Harris pressed him. "My question is whether the Obergefell case was correctly decided, in your opinion."

"If we can just talk about Obergefell, that'd be great," Harris cut in.

"I want to explain it," replied Kavanaugh.

"I actually know the history leading up to Obergefell," Harris replied coolly. "Can you just please address your comments to Obergefell?"

"So, I'd like to explain it if I can," insisted Kavanaugh, continuing to ignore her question and speak as if she, as a lawyer and former prosecutor, was not already well versed in the background of the decision. "He wrote the majority opinion in Romer v. Evans, Lawrence v. Texas, United States v. Windsor, Obergefell, and Masterpiece Cakeshop, concluding in Masterpiece Cakeshop, importantly, with a statement, if I could just read this—"

"No, please don't, because I actually have read it, and I'm sure most have," said Harris. "My question is very specific. Can you comment, on your personal opinion, on whether Obergefell was correctly decided? It's a yes or no. Please."

"Do you agree with that statement?" Harris pressed him.

"That is the precedent of the Supreme Court, agreed with by—"

Finally, realizing that Harris would not let him pass off his unnecessary history lecture as an answer, Kavanaugh told her he was not going to tell her his opinion.

"So, each of the justices have declined, as a matter of judicial independence — each of them — to answer questions in that line of cases," he said.

"So you will not answer that question?"

"Following the precedent set by those eight justices, they've all declined when asked to answer that question."

Kavanaugh will not agree that he won't vote to overturn SCOTUS ruling giving LGBTs right to marry established in Obergefell. Additionally, Kavanaugh's response to @SenKamalaHarris is the very definition of mansplaining. #StopKavanaugh pic.twitter.com/qg4xCqGYsu