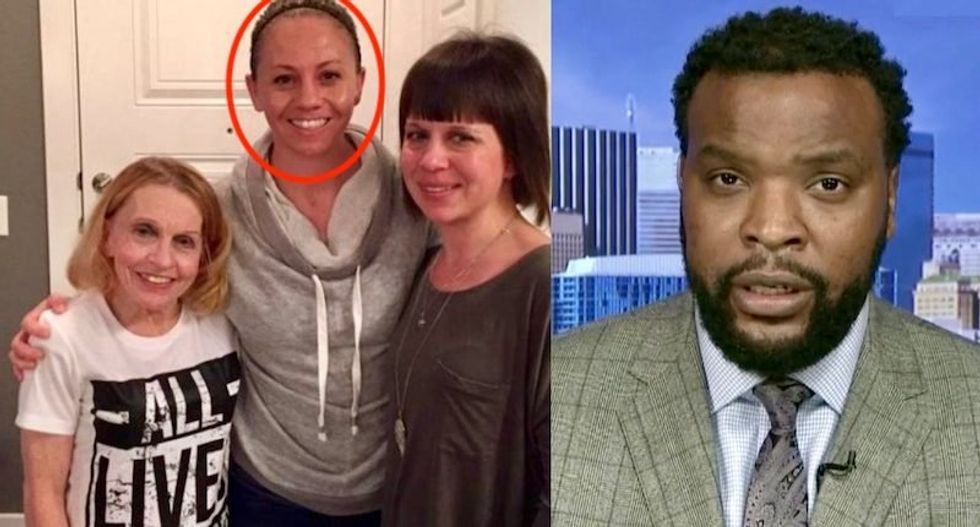 Attorneys representing the family of Botham Jean, the black man who was killed by an off-duty Dallas police officer in his own apartment, claim authorities are trying to discredit the victim.

Jean was shot dead on Sept. 6 by officer Amber Guyger, who claims she mistook his apartment for her own, which is located one floor below, and thought he was a burglar. Guyger was charged with manslaughter and has been released on a $300,000 bond.

A police affidavit released Thursday — the same day of Jean's funeral — shows that police seized relevant items to the case, like two fired cartridge casings, a laptop and a backpack with police equipment and paperwork, according NBC Dallas-Fort Worth, but also 10.4 grams of marijuana and a marijuana grinder.

Lee Merritt, who represents the family, criticized the search warrant, saying it shows that investigators were looking for drug paraphernalia in the hours following Jean's death. "They immediately began looking to smear him," Merritt told the Associated Press.

"This adds absolutely nothing of value for solving this crime. And, for it to be released this day, I don’t believe in coincidences," Merritt told NBC DFW. "This was an intent to come after this young man’s character, which is impeccable by the way."

The search warrant does not say to whom the marijuana belongs, which amounts to less than half of an ounce. According to Benjamin Crump, another attorney representing Jean's family, the discovery is "completely irrelevant," he told NBC DFW. Crump cautioned that any efforts to distract from Jean's death, is "nothing but a disgusting attempt to assassinate his character now that they have assassinated his person."

Subsequently, the local affiliate Fox 4 News reported on the newly-released affidavit with the headline: "Search warrant: Marijuana found in Botham Jean's apartment after deadly shooting." While the headline has since been changed people slammed the outlet as irresponsible and disgraceful for highlighting a detail that has no bearing on the facts of Jean's death across social media.

Former NAACP President Cornell Brooks described the headline as a "postmortem character assassination." "An after death marijuana possession charge does NOT legitimate a homicide," he wrote on Twitter.

This is the postmortem character assassination of #BothamJean .

This character attack is like when Emmet Till was accused of leering at a White woman (who lied) to legitimate his lynching.

An after death marijuana possession charge does NOT legitimate a homicide. @nytimes https://t.co/Wk5P604nr0

This is irresponsible and disgraceful. Botham Jean was killed in his own home and his life matters. https://t.co/CvhrGEv5yY

He is the victim. This is despicable. Why did the search warrant include “contraband” and “narcotics” among the items sought? https://t.co/rcavCN3asR

"This is an attack on an innocent man who was killed by a cop for simply existing in how own home," The American Civil Liberties Union wrote. "PERIOD."

This is an attack on an innocent man who was killed by a cop for simply existing in his own home. PERIOD.

New York Times Magazine reporter Nikole Hannah-Jones called the framing of the story as "unethical." "There is literally no scenario where a black man killed by police (even an off-duty one) cannot be blamed for his own death," she wrote.

This is so irresponsible and disgraceful. Why is this news in a story where he was killed after she broke into HIS home? This is unethical. Period. https://t.co/WStPFHhOND

There is literally no scenario where a black man killed by police (even an off-duty one) cannot be blamed for his own death. It’s one thing when police do it to protect themselves, it’s quite another when the people who are supposed to be the watchdogs of power become complicit.

The Fox headline and the promotion that marijuana was seized at Jean's apartment recalls the many instances where irrelevant information has been spread about black men and children after they have been shot by police as a means of casting doubt on their victimhood. After his body was left bleeding on the street for four hours, the New York Times famously wrote that 18-year-old Michael Brown, who was killed by a police officer in 2014, "was no angel."

Less discussed has been the fact that the search warrant contradicts Guyger's other statements – and the official account described in her arrest affidavit. The search warrant states that when Guyger was trying to enter the apartment, Jean "confronted the officer at the door. A neighbor stated he heard an exchange of words, immediately followed by at least two gun shots." The report was dated Sept. 7 – one day after the shooting.

However, on Sept. 9, when Guyger was arrested for manslaughter, the affidavit states that Jean's door was slightly ajar. When Guyger used her key, it reportedly pushed the door fully open. She claimed the apartment was "nearly completely dark," and she saw Jean across the room, she assumed he was an intruder. She then drew her firearm, claiming she fired twice after Jean "ignored verbal commands."

Before the search warrant become public, lawyers representing the Jean family disputed the claim that Jean's apartment door would have been open, as he was an accountant, who was meticulous in his work and life.

Law enforcement officials with direct knowledge of the case told to the Dallas Morning News that evidence from Jean's apartment suggests that Guyger did shoot him from across the room. However, it is not clear yet whether the door was unlocked or ajar.

On Friday, Jean's family addressed the new developments in a press conference. The victim's mother, Allison Jean said, "It is time that we recognize that lives matter. My son's life matters."

Mother of #BothamJean, Allison Jean, says the “smear” of her son is unacceptable. “It is time that we recognize that lives matter, my son’s life matters.” pic.twitter.com/UjyKRZ8XeG