With Beto O'Rourke on the Rise, Anti-Cruz Billboards Featuring Trump Could Arrive Right on Time 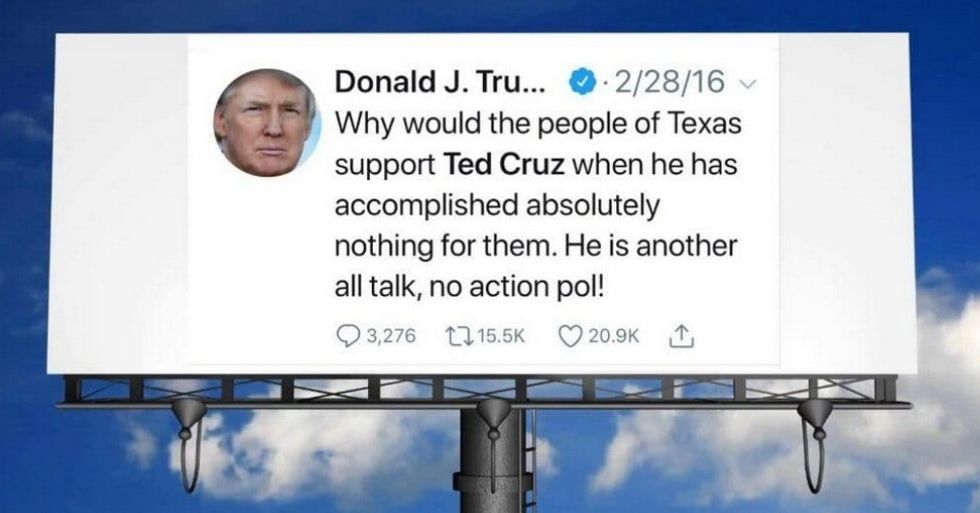 The story, as the Washington Post details, starts with Antonio Arellano, a Houston-based activist and Latino community organizer, who decided that Trump's promise to come to Texas and campaign for Cruz in the "biggest stadium... we can find," was a good time to remind voters in the Lonestar State about all the terrible things the president had said about the senator when they were competing against one another in the 2016 Republican primary season.

So on Saturday, Arellano tweeted this:

Soon after, he told the Post, the idea began to take off.

And on Sunday, with this GoFundMe page already established, online activist Claude Taylor as well as David Hogg, survivor of the Parkland school shooting and a gun control advocate, joined the fray, with Hogg blasting this tweet to his more than 874k followers:

With an initial goal of $6,000 to pay for the billboards, the small group of activists quickly surpassed that figure. "The group raised $9,760, then turned away further donations," the Post reports. "Arellano said the actual billboard will be a mobile truck with two sides, and could carry two different tweets at once, one on each side. The route has not yet been planned, but Arellano said he is exploring where in the state he should dispatch it with the hashtag #TrumpTweetTruck."

According to Real Clear Politics, an average of recent and relevant polls still has Cruz up over O'Rourke by about 4.4 percentage points, but the polling geeks at Five-Thirty-Eight argue that the incumbent, while still the likely winner, has plenty of reason to worry when several of the most recent polls showing the race essentially tied. "That's an awfully close race for a state that President Trump won by 9 points in 2016," the analysis stated.

While still considered a long shot—though energy and voter turnout is seen as key—O'Rourke over the weekend completed a 34-day road trip across the state and sounded confident that his campaign can topple Cruz, even without any involuntary help from Trump:

This work is licensed under a Creative Commons Attribution-Share Alike 3.0 License
Report typos and corrections to: feedback@alternet.org.