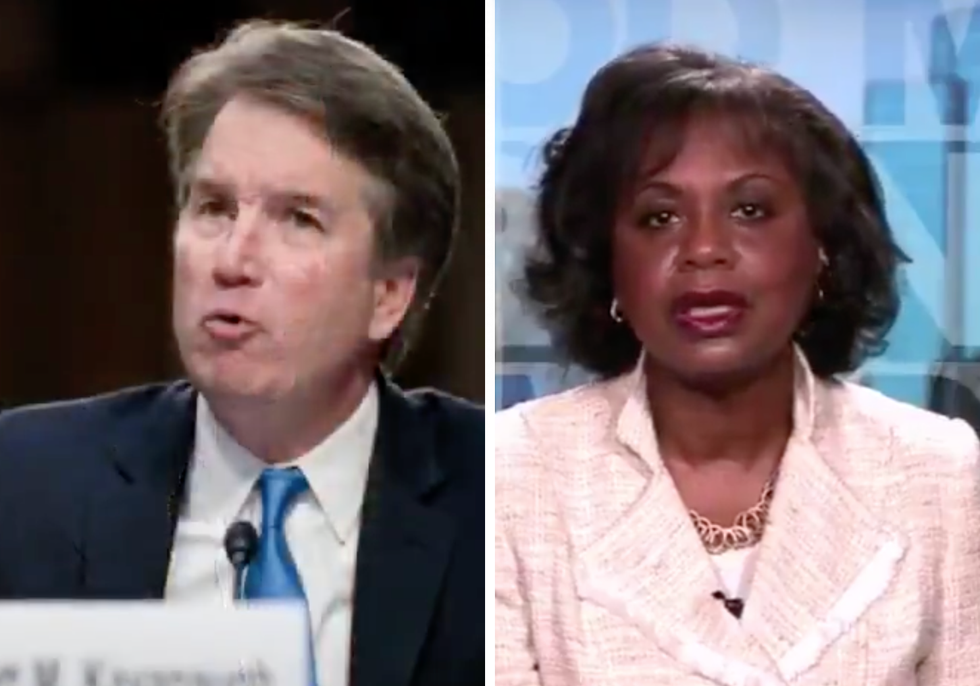 In a new interview on ABC's Good Morning America, Brandeis University Professor Anita Hill — who famously  testified about her sexual harassment at the hands of Clarence Thomas as he was confirmed to the Supreme Court in 1991 — is speaking out on the new sexual assault allegations against Supreme Court Nominee Brett Kavanaugh by California psychology professor Christine Blasey Ford.

In the interview with George Stephanopoulos, Hill strongly supported Ford's request that the FBI investigate the incident before the Senate goes through with hearings, because, "the hearing questions need to have a frame," and an investigation would inform the questions senators can ask. She also urged that expert witnesses be invited to give information. And she criticized the timeline Republicans were trying to set up, insisting "six days is not enough" to get to the bottom of the charges.

Ultimately, Hill stressed, the reason Kavanaugh should bear the "burden of persuasion" is that "we are talking about a lifetime appointment on our nation's highest court ... it is an honor and a privilege to be nominated and to serve, not an entitlement."

FULL INTERVIEW: Anita Hill, who accused then-SCOTUS nominee Clarence Thomas of sexual harassment in 1991, tells @GStephanopoulos that Brett Kavanaugh has the 'burden of persuasion' when it comes to these sexual assault allegations. https://t.co/JAIFqxoc0e pic.twitter.com/Th687r6BT7

Hill's allegations against Thomas drew scorn and attack from many Republican senators — some of whom, like Sen. Orrin Hatch, are still around and using the same playbook on Ford.

Ford, who is now facing death threats for coming forward, alleges that at a party in the early 1980s when she was 15, Kavanaugh pulled her into a room, held her down, groped her, tried to undress her, and covered her mouth while a friend, Mark Judge, looked on and laughed.

Since detailing the allegation, Republicans have proposed giving her a hearing, but are still trying to hold the vote immediately after, refusing to support a preliminary FBI investigation, and are not calling Judge or any other witnesses to testify.