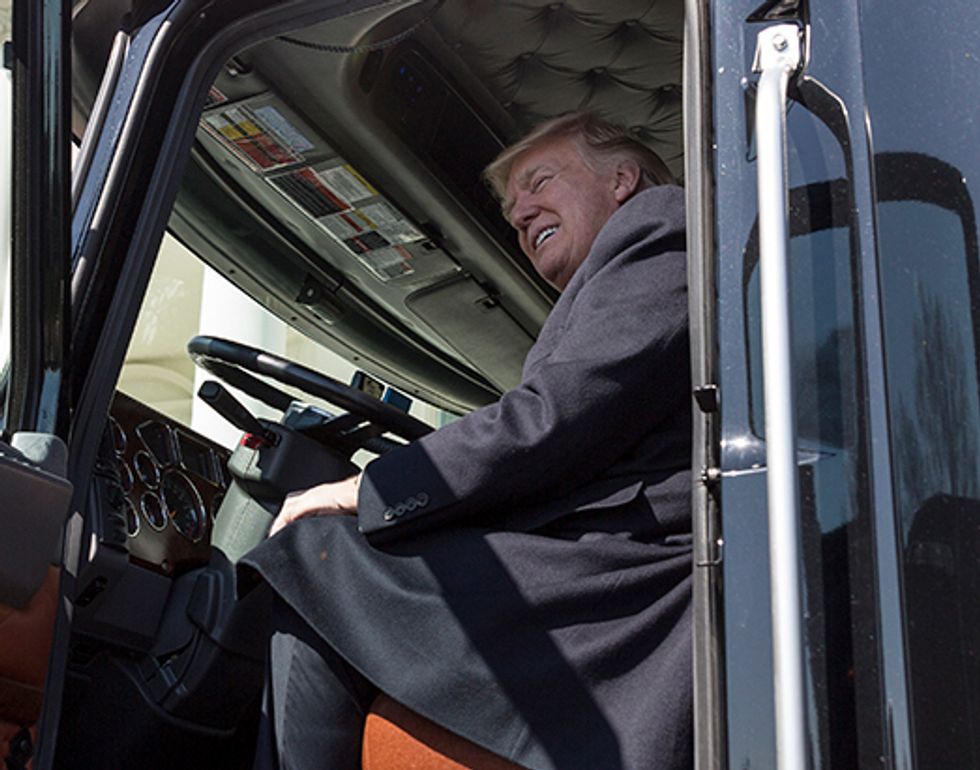 President Donald Trump sits in the driver’s seat of a semi-truck as he welcomes truckers and CEO’s to the White House, Thursday, March 23, 2017, to discuss healthcare. (Official White House Photo by Benjamin Applebaum)
Cody Fenwick
and
AlterNet
September 12, 2018

President Donald Trump frequently lies when he boasts about the performance of the economy under his presidency, just as he lied when claimed the positive economic data under President Barack Obama was "phony."

But on Monday, Chair of the White House Council of Economic Advisers Kevin Hassett offered a much more thorough and systematic approach to defending the claim that the Trump administration has led to a booming economy. (Hassett also acknowledged that Trump's recent boast about the economy on Twitter was off by an order of magnitude.)

However, as multiple responses to Hassett's claims have revealed, even this more sophisticated argument fails to make the case for a Trump-induced boom.

These are the facts that the Trump administration seems to think it can transform into evidence that it’s made the recovery better than it was before.

He explained that, despite Hassett's efforts to squint at the data and see a major impact after the 2016 elections, the trends tell basically one story: the economy under Trump has essentially been a continuation of the economy under Obama.

Some of the changes the White House attributes to Trump, he continued, are more plausibly attributable to other factors.

"The Trump administration likes to think that investment has gone up because of the magic of the Republicans' big corporate tax cuts. But the reality is a lot more mundane: It’s oil," he wrote. "Drilling, you see, makes up a big part of business investment, so it should be no surprise that it flatlined after oil prices collapsed in 2014 and then rebounded after prices went up in 2016. It’s possible that the tax cuts will eventually increase investment, but they haven’t so far."

"One of the most baffling parts of Hassett’s presentation was his attempt to show that the job market had vastly improved, using the employment rate among 25- to 54-year-olds," explained Weissman. "If you take a longer view, and use the actual employment rate rather than a rolling average, it’s hard to see any noticeable change in the trend after November 2016."

Yet even if the White House's claims about Trump's near-term impact on the economy were true, it wouldn't answer some of the most essential questions about his policies. Are massive tax cuts for the wealthy, financed by deficit spending, and a reckless deregulatory push in the environmental and financial realms a recipe for the long-term economic health and wellbeing of the nation?

Almost certainly not — but Republicans prefer not to have this conversation.

Weissman does argue that some of what Trump and the Republicans have done may have given the economy a boost in recent months (rather than the post-election bump Hassett argued for.) By cutting taxes and increasing spending, the GOP has essentially given the economy modest stimulus, which President Barack Obama had constantly pushed for in the wake of the 2008 financial crisis.

"The White House economic team does not actually want to admit that it has juiced growth through fiscal stimulus, because most dedicated conservatives still insist that stimulus doesn’t really work," wrote Weissman. "Instead, it wants to credit deregulation and the effects of tax cuts on business investment rather than their impact on household spending. That’s why, even if the administration deserves some acknowledgment for its actual economic policies, it’s still important to debunk its economic arguments."