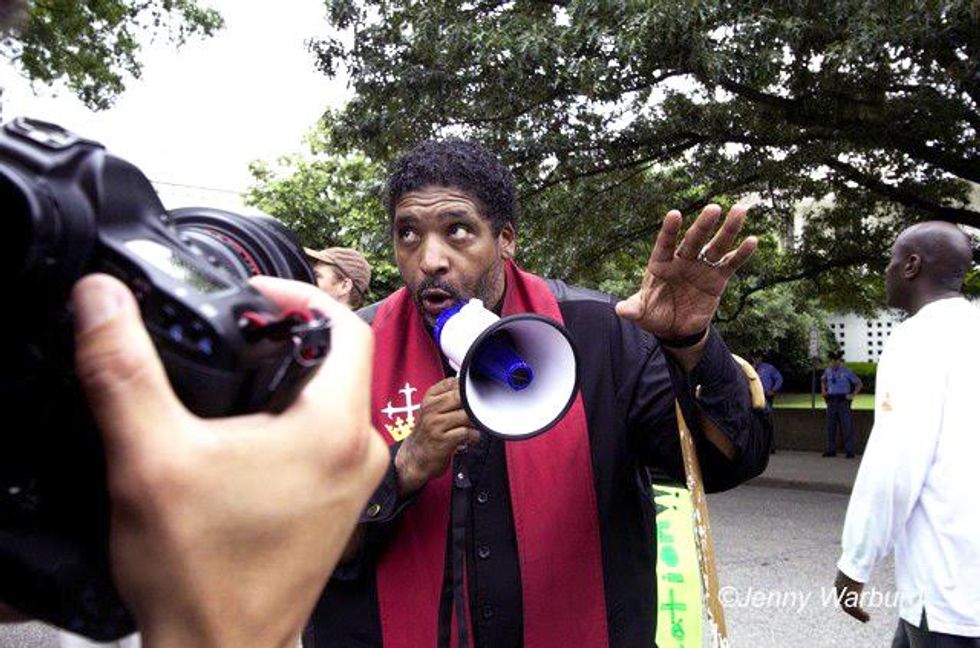 In the Donald Trump era, far-right white evangelicals have been jumping for joy; as they see it, they now have a president who is on their side. Trump, despite allegations that he had extramarital affairs with an adult film star (Stormy Daniels) and a former Playboy model (Karen McDougal) and paid both of them hush money to keep quiet, continues to be on very friendly terms with James Dobson, Tony Perkins, Franklin Graham and other theocrats who insist that he is fighting for Christianity. But listening to black talk radio stations in the U.S., one encounters a much more negative view of Trump’s presidency—and many African-American preachers are absolutely fed up.

Trump is not popular in the African-American community, and that includes black ministers. The Rev. Al Sharpton, who hosts “Politics Nation” on MSNBC as well as the syndicated radio program “Keeping It Real,” is perhaps Trump’s most visible critic in the black church. Yet there are many other African-American preachers who have nothing good to say about Trump, and for them, liberal/progressive politics and Christianity go hand in hand.

When the Rev. Raphael G. Warnock spoke at Atlanta’s historic Ebenezer Baptist Church in January to celebrate Dr. Martin Luther King, Jr.’s birthday, he originally planned to avoid Trump-bashing during his sermon. But when Trump described El Salvador, Haiti and some African nations as “shithole countries,” Warnock felt he had no choice but to speak out—and he denounced Trump as “a willfully ignorant, racist, xenophobic, narcissistic con man.”

From Detroit to Philadelphia to Memphis, the African Methodist Episcopal church attracts plenty of liberals and progressives. And when the Rev. J. Edgar Boyd, pastor for the First AME Church in Los Angeles, asked his congregation to pray for Trump, he was booed—yet the boos quickly turned to applause when Boyd asserted that Trump must be held accountable for “his words, his deeds and his actions.” Unlike all the far-right buffoons who consider Trump’s presidency a gift from God, Boyd wasn’t asking the congregation to pray for Trump because he liked the president’s politics; it was more of a pray-for-the-sinner type of thing.

Indeed, Boyd is no right-winger. He has been a scathing critic of police overreach in the black community.

In June, the Council of Bishops of the African Methodist Episcopal Church signed a joint statement condemning Trump’s draconian immigration policy and the separation of families that has come with it. The ministers included Clement W. Fugh, Reginald T. Jackson, Frank Mr. Reid III, McKinley Young and Vashti M. McKenzie.

The AME ministers asserted, “The Bible does not justify discrimination masked as racism, sexism, economic inequality, oppression or the abuse of children. Jesus, who was an immigrant who had to leave the place of his birth and immigrate to Egypt because of an oppressive leader and system, admonishes all that the poor, children, the elderly, widows, and widowers should have a special place of justice and compassion in every nation.”

Trump is so unpopular in the black community that when John Gray (who heads the Relentless Church in Greenville, South Carolina) visited the White House on August 1 to meet with the president, he was criticized for it repeatedly on black talk radio. Gray has said that one of the reasons he went to the White House was that he hoped to discuss prison reform with the president, but his wife urged him not to go—asserting that many black churchgoers would see it an endorsement of Trump and be upset about it. And sure enough, upset is what they were.

When Trump is criticized on black talk radio for his alliance with far-right white evangelicals, the subject of the “prosperity gospel” or “prosperity theology” often comes up—and Trump is routinely lambasted for favoring the rich over the poor. Often, black churchgoers will quote scripture when they call Sharpton’s “Keeping It Real” and other programs, noting all the Bible verses that urge Christians to look after the poor. And one verse that gets quoted a lot is, “It is easier for a camel to fit through the eye of a needle than for a rich person to enter the kingdom.”