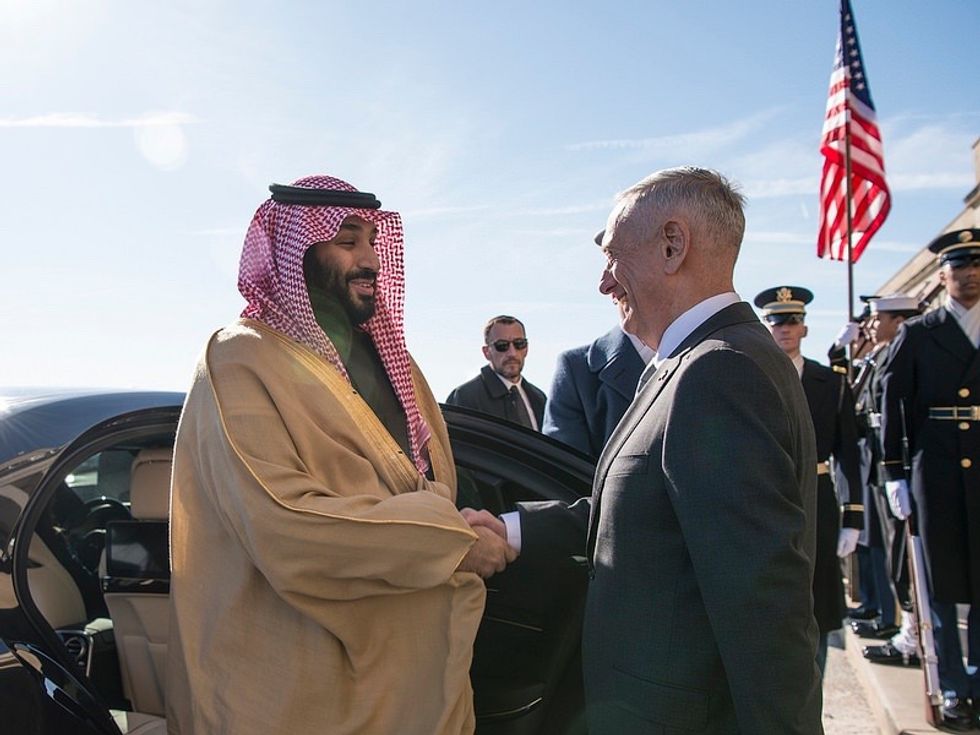 Three years ago, the royal family of Saudi Arabia asked the United States to support the Saudis’ planned military intervention in Yemen’s civil war. Before requesting U.S. help in this venture, the Saudis attempted to raise a Pan-Arab army that would sweep into Yemen in order to expel the Houthis, a Shi’a minority group in a region that is largely Sunni, and impose a government that would be more favorable to the Saudis. Their attempt failed. Other Arab countries did not rally to the Saudis. In hindsight, of course it failed. Who would want to fight and die for the royal family of Saudi Arabia and further Saudi political ends?

The Saudis decided not to deploy their own, unaided ground forces into Yemen. Instead, they embarked on an aerial campaign to bomb the Houthis into submission, much like the Americans once tried in Vietnam. It seemed that Prince Salman and his advisers were unaware of the truth about the Vietnam War. Despite dropping countless shells in Southeast Asia, we Americans ultimately lost that war. The Vietnamese expelled the Americans and then rapidly rebuilt their country to become the thriving nation and economy that Vietnam is today. It’s possible that the mistaken strategy of aerial campaigns was not solely that of the Saudi government. President Obama promised to aid the Saudis by providing bombs to the Saudi air forces, directing that U.S. air tankers refuel Saudi bombing sorties, and sharing of intelligence to aid the Saudis in their efforts to quell the civil war in neighboring Yemen.

The war in Yemen began when the Houthis had enough of governmental corruption and rebelled. Their violent rebellion toppled then-President Saleh and forced him into exile. The Houthis took control of large parts of the country, including the capital, Sana'a. At the same time, and to add to the chaos, ISIS took root in the northeast region of Yemen and began an anarchic and lethal campaign fighting everyone on either side of this war; so there are situations where the Saudis and ISIS have fought together in opposition of the Houthis. The U.S. opposes ISIS, but one is never sure that the Saudis oppose ISIS. Who is the “bad guy” in this scenario?

Both the U.S. and the Saudis blame the war in Yemen on Iran for supplying weapons and sectarian support to the Houthis. American Ambassador to the United Nations Nikki Haley’s narrative blames the Iranians, eliding the fact that the Saudis intervention is what exacerbated this conflict—more Trump administration testing of what is and what is not a fact. The hawkish agreement between the U.S. and the Saudi government probably emerged, in part, from the Saudi opposition to the Obama administration’s agreement with the Iranians regarding nuclear development and prohibiting militarization of Iran’s nuclear program. This agreement was opposed by Saudi Arabia and Israel—politics does indeed make for strange bedfellows.

Yemen was already the poorest nation in the Middle East. Now ISIS, the U.S., the United Arab Emirates and Saudi Arabia have all contributed to driving an impoverished nation into dire famine. For three long years this has gone on. American media outlets largely ignore this war. Yemen is seldom seen and seldom mentioned in a cycle of continuous repetition of willful blindness. It’s almost like we are not at war. But we are at war, a real one. People are dying as a result of U.S. ordnance and U.S. drone strikes.

In a war, the real question is “what does a victory look like?” In Yemen, the victor will take control of the poorest country in the region one without oil reserves and one where most of the buildings, hospitals and schools have been leveled by American-made, Saudi-deployed bombs. Most Americans do not know we are at war and few would know where to locate Yemen on a map. Incongruously, both the Democrats and Republicans support this war.

Contrary to the American mass media’s general indifference to the conflict in Yemen, the Washington Post reported the following story on July 26, 2018, and did a superb job of covering it.

On April 23, Saudi planes dropped cluster bombs on a wedding being celebrated in western Yemen, where the population supports neither side of the war. The airstrikes killed 22 people, including children. The villagers did not know why they had been targeted. The surviving villagers and international investigators found American made bombs, including cluster bomb remnants, all over the target area. Cluster bombs are banned by international law, yet ordnance found on the bomb site was made by Raytheon, a Massachusetts-based arms manufacturer. These bombs are illegal, in part because they can roll around the grounds of the attack for weeks after deployment. Children in conflict areas often pick them up and are destroyed in what one could tragically imagine as a hopeful, happy moment that they’ve found something unusual or a toy.

This is a red line, folks. Designing bombs that linger around for weeks in civilian areas and the killing of children seems to me to be outrageous. Decent people would never allow any company to produce them. But an American manufacturer makes them for sale and profits from their distribution and eventual detonation.

Simply put, the United States must get out of this war. Given that President Trump has little interest other than keeping company with brutal dictators, Yemen will not likely surface in his mind. In an ideal world, he would call the Saudi prince and ask why we are in Yemen.

U.S. involvement in the Yemen war has never been voted on or approved by Congress—the voice of the American people. Yet, substantial sums of U.S. tax dollars are being spent on fuel and bombs that sustain the conflict there. Neither political party will even discuss this war.

Someone needs to tell the Saudi Crown Prince that, despite all the bombing, we Americans ultimately lost in Vietnam. Vietnam got better once the Americans left. We and the Saudis should do the same in Yemen. Get out of Yemen, broker a peace without the use of bombs and drone strikes, and let that nation rebuild.