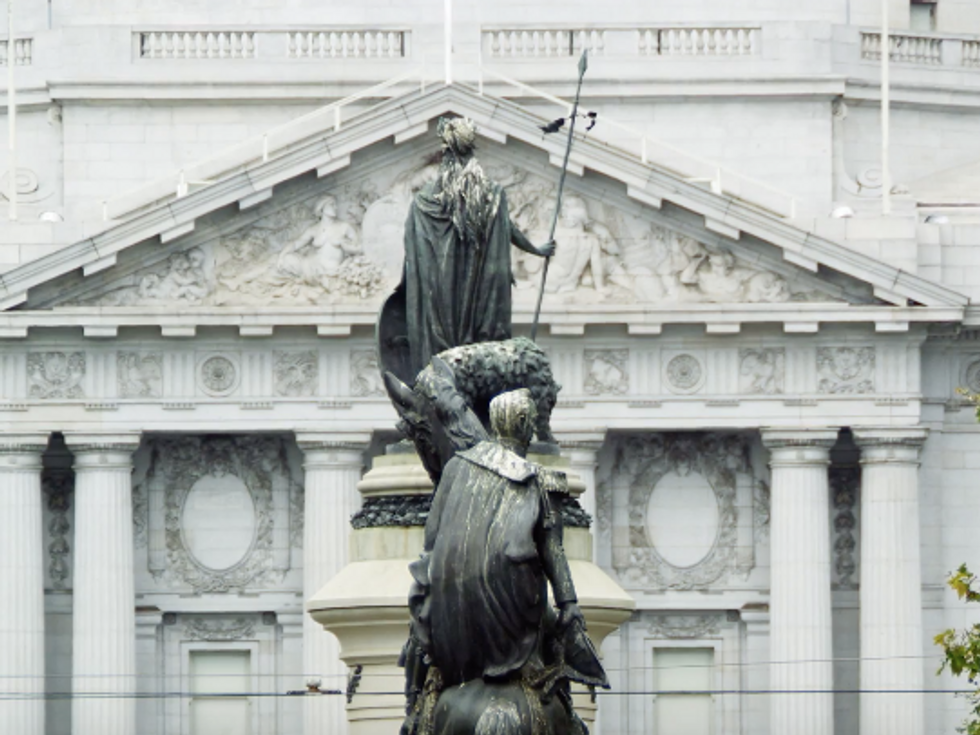 In San Francisco, there is an an 800-ton monument that retells California history, from the Spanish missions to American settlement. Several bronze sculptures and relief plaques depict American Indians, white miners, missionaries and settlers. A female figure symbolizing white culture stands atop a massive stone pillar.

The design of the “pioneer monument” was celebrated in newspapers across the country when it was erected in 1894. Today, however, activists argue that the monument – particularly its depiction of a Spanish missionary and Mexican “vaquero,” or cowboy, towering over an American Indian – is demeaning to American Indians.

Should the city take down part of this 125-year-old monument?

Many cities are removing or reinterpreting their Confederate monuments, with the understanding that they commemorate racism. But few Americans realize that pioneer monuments placed across the country are also racist.

As my research and forthcoming book on pioneer monuments since the 1890s show, most early pioneer statues celebrated whites dominating American Indians.

Since at least 2015, cities across the United States have debated what to do with more than 700 Confederate monuments.

After the Civil War, grieving widows raised funds to place monuments to soldiers in southern cemeteries. But most statues of Confederate leaders and foot soldiers were put up around 1900 by heritage organizations to honor the “Lost Cause.”

The “Lost Cause” is the idea that that the Civil War began as a heroic defense against northern aggression. In fact, the Civil War was primarily fought to defend slavery.

In the past few years, cities such as New Orleans, Louisiana and Baltimore, Maryland have chosen to remove their Confederate statues. Activists tore down a Confederate soldier statue in Durham, North Carolina last year.

By contrast, there has been far less attention on the roughly 200 pioneer monuments erected for similar reasons around the same time.

The earliest pioneer monuments were put up in midwestern and western cities such as Des Moines, Iowa and San Francisco, California. They date from the 1890s and early 1900s, as whites settled the frontier and pushed American Indians onto reservations.

Those statues showed white men claiming land and building farms and cities in the West. They explicitly celebrated the dominant white view of the Wild West progressing from American Indian “savagery” to white “civilization.”

But Denver residents expected the figure at the top of the pillar to represent the pinnacle of progress, like “Eureka,” the female figure representing the spirit of California on San Francisco’s monument.

Denver’s residents argued that the monument needed a white man on top, so MacMonnies revised his design, replacing the American Indian warrior with frontiersman and American Indian fighter Kit Carson, on horseback.

By the 1920s, whites controlled most western lands, and they stopped depicting American Indians in their pioneer monuments. New pioneer monuments from Maryland to California focused on western women. Pioneer mothers in sunbonnets stood for white “civilization” winning in the West. And they offered a conservative model of womanhood to contrast flappers wearing short dresses and bobbed hair and women’s growing sexual freedom.

More recent monuments, such as Goodland, Kansas’s “They Came to Stay” and Omaha, Nebraska’s “Pioneer Courage,” do not directly engage racial politics. As their titles suggest, these statues honor pioneer families’ grit, and they teach local history.

But these statues still represent a racist view, ignoring the cost of white settlement on Native lands. Like earlier monuments, they reinforce white dominance and erase ethnic diversity in the American West.

The recent debate about Confederate monuments has sparked some discussion of pioneer monuments in a few places. In April, Kalamazoo, Michigan removed its 1940 “Fountain of the Pioneers” because local residents disliked its depiction of a white settler looming over an American Indian.

After decades of protest, San Francisco is debating taking down the depiction of a Spanish missionary towering over an American Indian from the 1894 pioneer monument.

In the 1990s, activists persuaded the city to place a plaque telling the dark side of California history in front of the statue. But today protesters argue that plaque, hidden by landscaping, is not enough. They want “Early Days” – if not the entire monument – taken down.

The San Francisco Arts Commission agrees, but the Board of Appeals blocked its removal in April.

Each pioneer monument has its own history and local meaning. There is no one-size-fits-all solution. But communities are beginning to consider removing or reinterpreting these monuments to white conquest.