When Will the Real Journalists at Fox News Step Up to Denounce the Trump Propaganda Machine? 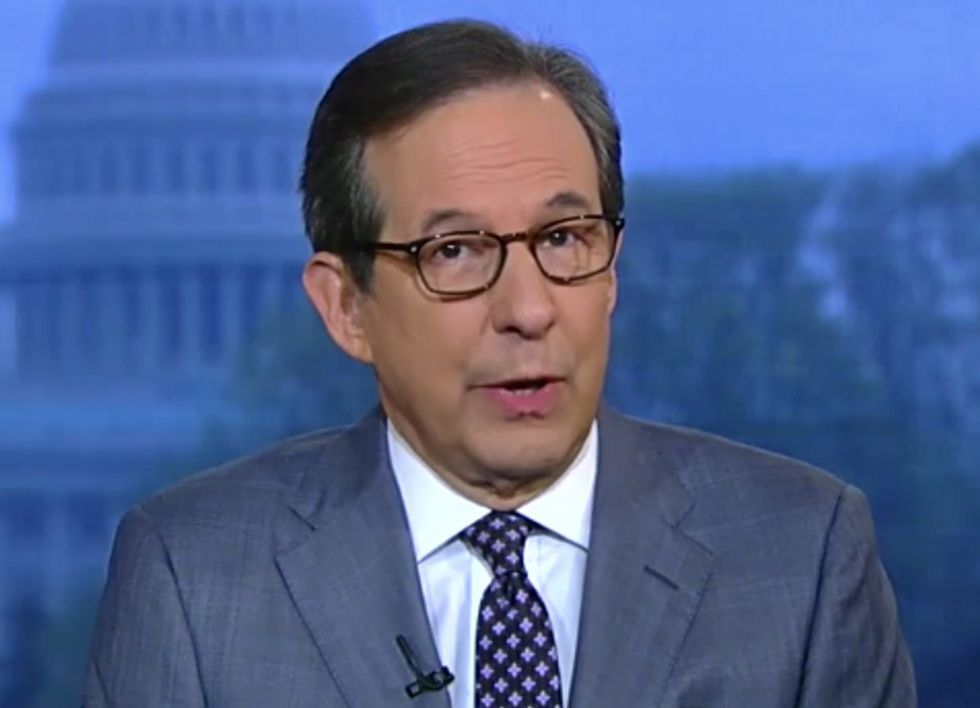 This article originally appeared on rantt.com.

“‘Enemy of the people’ is an incendiary phrase,” reported Scott Simon on Weekend Edition Saturday on NPR. “It’s been uttered by some of history’s most vicious thugs — Robespierre, Goebbels, Lenin, Stalin, Mao — to vilify their opponents…who were often murdered.”

At Trump’s rally in Tampa on Tuesday night, CNN senior White House correspondent Jim Acosta was assailed by an angry mob of Trump supporters. In a video Acosta tweeted, one rally-goer showed off his “F*** the Media” t-shirt, while others spewed venom and waved middle fingers.

On Thursday, Acosta implored White House press secretary Sarah Huckabee Sanders to disavow Trump’s refrain that the media is the “enemy of the people.” She refused to accede. Instead, Sanders told Acosta, “I appreciate your passion,” and proceeded to list the ways in which she has felt threatened.

In a conversation with HLN’s S.E. Cupp, Acosta said, “My sense of it is that these opinions that these folks have at these rallies â€• they’re shaped by what they see in the prime time hours of Fox News…”

Over at Fox, prime-time host, Sean Hannity validated Acosta’s hunch. In his opening monologue on Tuesday night, Hannity effectively blamed Acosta: “The people of this country, they’re screaming at you for a reason.” The following day, the two locked horns on Twitter.

In response, Hannity unleashed vitriol and vulgarity: “Jimmy @Acosta sorry your precious feelings are hurt & that people see through your lying bullshit for what it is. FAKE NEWS. #CNNSUCKS.”

Whipping his audience into a foaming frenzy isn’t new for Hannity. He took to the airwaves in June after the horrific shooting at the Capital Gazette newspaper in Annapolis where five journalists were killed.

Blaming African-American Congresswoman Maxine Waters for the murder spree, Hannity said, “I’ve been saying now for days that something horrible was going to happen because of the rhetoric. Really Maxine?”

At the time, Hannity was roundly criticized on social media. Ben Collins, a reporter for NBC News, tweeted:

“When is it enough for the real people in the daytime news division at Fox News to step in and denounce this guy?”

Who are these real people in the daytime news division at Fox?

“They are analogous, Fox suggested, to the editorial and op-ed opinion pages of newspapers, which ought not be confused with the straight news coverage,” reported the Columbia Journalism Review in 2010.

But the firewall between Fox’s straight news and opinion hosts is now more like a sieve. For example:

Trump has lauded Fitton for working to end the Mueller investigation. As reported by The Washington Post:

Fox hosts are not simply Trump fanboys and fangirls. They are propagating Trump’s blatant and damaging lies.

On Wednesday, The Washington Post revealed a recent spike in the number of “false and misleading claims” made by Trump. In his first year as President, Trump made 2,140 false claims, according to the Post. In just the last six months, he has nearly doubled that total to 4,229. Pulitzer Prize winner PolitiFact has cataloged 10 pages of Trump false statements (not including “mostly false” statement and “half-truths.”)

Fox hosts wreak arguably the greatest destruction by echoing Trump’s lies about the Russia investigation, and his meritless attacks on Special Counsel Robert Mueller, the Justice Department, the Intelligence Community, and the FBI. By doing so, Fox propagandists are accomplishing Putin’s goal of undermining Americans’ faith in their institutions.

In April, Bill Maher asked Fox commentator Geraldo Rivera in his interview on Real Time on HBO, “Why Fox News?”

This ruse is known to every three-card monte hustler on the street. Fox News journalists are paid shills. They’re plants whose purpose is to create the illusion of journalistic legitimacy. They’re role players in the Fox-Trump con job.

And by sprinkling a little real news into the Fox propaganda machine, journalists there are only lubricating its gears.

In Fox’s ratings report from the first quarter of 2018, Smith delivered an average of 1,437,000 in total viewers — nearly on par with ratings for Fox & Friends (Smith’s audience was only about 6% fewer viewers).

Smith is also collecting a hefty paycheck — $10 million a year, reported by the Observer in 2016. He’s paid with revenues generated by ratings winners Hannity and the Fox propagandists.

Even if he is a fine journalist with noble intentions, what if Smith were fattening revenues of and payrolled by the NRA or the KKK? Working for Fox News is equally indefensible.

Smith and the other real journalists at Fox may think they’re doing a service. But as Mother Jones editor in chief Clara Jeffery tweeted:

I don't understand why Chris Wallace or Shep Smith or John Roberts or anybody who's arguably an actual journalist s… https://t.co/PFe4TS5RbQ
— Clara Jeffery (@Clara Jeffery) 1531804216.0

Fox journalists have reportedly grumbled about Hannity and the network’s treatment of him — but mum’s the word.

Back in April, when Hannity revealed he had a business relationship with former Trump attorney Michael Cohen, Fox doubled down on Hannity, announcing that he had the network’s “full support.”

Washington Post media reporter Paul Farhi wrote at the time that journalists at Fox were “angry and disappointed” about the network’s handling of the Hannity-Cohen matter. But Fox journalists insisted on remaining nameless — they talked to Farhi on condition of being background.

I emailed Farhi, asking why Fox journalists wouldn’t go on-the-record. Farhi responded: “They like their jobs and don’t feel like losing them… Do you go around publicly criticizing your employer?”

But Fox News is an employer like no other.

The Trump-Fox symbiosis has been well-documented. As Vanity Fair reporter Gabriel Sherman told Terry Gross on NPR’s Fresh Air in July: “So there is this really bizarre and surreal dynamic that the president of the United States is the executive producer, the head of one of the three cable news networks, which exists to promote his agenda. … I think it’s more than a feedback loop, I think it’s basically one organization.”

Understandably, Fox journalists don’t want to risk their livelihoods by dissing their employer. But Fox straight news anchors are serving as enablers for the network’s purveyors of propaganda.

At Trump’s rally Saturday night in Ohio, the president lambasted the media as “fake news” and said journalists “were terrible people.” He then saluted Fox propagandists by name: Tucker, Hannity, Ingraham, Doocy, Kilmeade, Earhardt, Dobbs, and Bartiromo. He called them “the people that love us.”

Silence is an act of complicity. Those who don’t speak out against wrongdoing are culpable. As philosopher Abraham Joshua Heschel said, “Indifference to evil is worse than evil itself…in a free society, some are guilty, but all are responsible.”

Given the stakes, the enormity of lethal danger posed by Trump and Fox News, real journalists at the network must go on-the-record with their anger and disappointment at their co-workers and bosses.

With the exception of an occasional mild joust from Smith, Fox journalists have avoided criticizing their opinion colleagues. Smith said in a TIME magazine interview in March, “They don’t really have rules on the opinion side. They can say whatever they want.”

Jimmy Kimmel hosted Fox journalist Bret Baier on his show last week. Kimmel asked Baier about getting “lumped” in with Hannity and Carlson.

Kimmel said, “I would imagine that Shepard Smith and Chris Wallace and yourself, that sometimes you’re not crazy about, perception-wise, being a part of that.”

Baier responded, “We’re one team, we’re one company.” Then he contradicted himself, saying of his opinion teammates: “We’re two different businesses entirely.”

Fact check: Fox straight news and opinion are not two different businesses. Fox News is one business entity, one profit center, and part of a larger one.

After the Disney acquisition, Variety reports that “Rupert Murdoch and his family, the founders of Fox, will then spin off Fox Broadcasting Co., Fox Sports, Fox News, Fox Television Stations, and a handful of other assets into a new company that will have revenue of $10 billion and earnings of about $2.8 billion.”

John Stoehr, editor in chief of the Editorial Board newsletter and fellow at the Yale Journalism Initiative, tweeted:

While Fox journalists choose not to ruffle feathers at their workplace, other headliners and former Fox News on-air commentators have been speaking out.

In June, Fox frequent commentator Bruce Turkel announced the end of his relationship with the network, writing in an open letter:

“I quit. Quite simply, the position Fox has taken on our government’s policy of separating children from their parents is too heinous for me to accept.”

In March, former Fox News analyst Ralph Peters said Fox anchors “understand that they are doing propaganda” for Trump. In an email to colleagues, as he resigned, Peters wrote: “Fox News is assaulting our constitutional order and the rule of law,” saying Fox has degenerated into “a mere propaganda machine for a destructive and ethically ruinous administration.”

Fox journalists are not exempt from accountability. Real journalists there must denounce Fox propagandists and resign. Otherwise, they may keep collecting fat paychecks from Fox, but they are ethically bankrupt. They’re selling their moral backbones — like body parts for cash.

Dan Gillmor, professor of practice at the Cronkite School of Journalism at Arizona State University, tweeted:

On Thursday, after Sanders refused to squash Trump’s claims that the media is “the enemy of the people,” Acosta walked out of the White House press briefing. No other reporters followed him. Maybe next time, they will.

And perhaps real journalists at Fox News will do the right thing — join their colleagues in solidarity, denounce the Fox propaganda machine, and walk away.

No one from Fox News responded to my inquiries. Ed Henry blocked me on Twitter.

In memory of my journalism mentor, Steve Buttry.

This article originally appeared on RanttMedia.