With US Prison Strike on Fourth Day, Reports of Hunger Strikes and Work Stoppages Nationwide 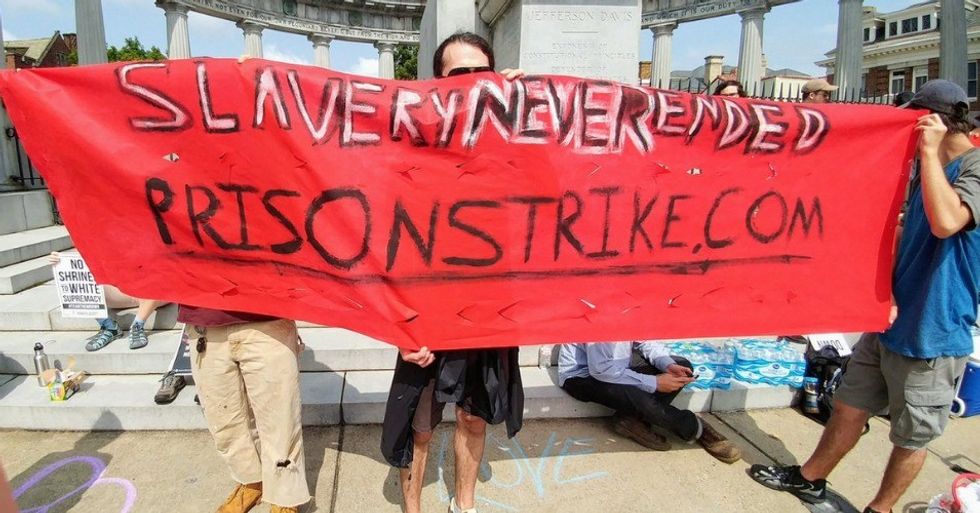 Details of the nationwide prison strike, now in its third day, are gradually emerging from institutions where inmates are staging hunger strikes, refusing to work, and participating in sit-ins to protest unjust sentencing laws, poor living conditions, and the continued existence of slavery within the nation's carceral system.

The strike began on Tuesday, with organizers reporting that incarcerated Americans in 17 states had pledged to join the action.

According to a statement from organizers including Jailhouse Lawyers Speak and the Incarcerated Workers Organizing Committee (IWOC), at least six direct actions had taken place at U.S. prisons in North Carolina, South Carolina, Florida, Washington, and California.

The strike has already spread internationally, with prisoners at Burnside Jail in Halifax, Nova Scotia releasing a statement saying, "We are being warehoused as inmates, not treated as human beings" and expressing solidarity with incarcerated Americans.

Shows of solidarity have also cropped up around the country, in the form of banners and protests outside institutions including Broward County Jail in Florida and Metropolitan Detention Center in New York.

"We saw outside solidarity actions in at least 21 cities around the US and as far abroad as Leipzig, Germany. We saw Palestinian political prisoners give a statement of solidarity from their prisons in occupied Palestine," wrote strike organizers on Wednesday.

Strikers and spokespeople for the movement urged patience from the outside world and noted that "although there aren't widespread reports of actions coming out of prisons that people need to understand that the tactics being used in this strike are not always visible."

"Prisoners are boycotting commissaries, they are engaging in hunger strikes which can take days for the state to acknowledge, and they will be engaging in sit-ins and work strikes which are not always reported to the outside," said Amani Awari, Jared Ware, and Brooke Terpsta, who have been involved in covering the strike and spreading information to the news media. "Departments of Corrections are not reliable sources of information for these actions and will deny them and seek to repress those who are engaged in them."

A dispatch from Folsom State Prison in California showed inmate Heriberto Garcia refusing food on the first day of the strike.

According to the Guardian, 200 inmates have reportedly joined protests at Northwest Detention Center in Tacoma, Washington, while about 100 prisoners at Hyde Correctional Institute in Fairfield, North Carolina assembled in the prison's yard carrying signs reading "Parole," "Better Food," and "In solidarity."

The prison strike has won the support of numerous social justice groups and advocates including the Democratic Socialists of America and the ACLU, with many noting the risks inmates take by refusing to work and take their meals in order to demand reforms.

Organizers of the strike have released a list of 10 demands, including an end to prison slavery, sentencing reforms that would allow all prisoners access to rehabilitation and the possibility of parole, and an end to racist over-policing, over-charging, and over-sentencing of black and brown prisoners, which has contributed to the United States' disproportionately black and Latino prison population.

Prison officials attempted to quell the mass demonstrations before they began, with Ohio authorities confiscating the cell phone of Siddique Abdullah Hasan, a prison activist who is incarcerated at Ohio State Penitentiary. Authorities reported that correspondence Hasan had received from an organizer was "propaganda supporting the prison strike this year."

The Incarcerated Workers Organizing Committee (IWOC) provided a list on its website of other inmates who "are facing repression because of the strike."

Organizers are expecting the strike to be the largest in U.S. history. It comes two years after a prison strike in which tens of thousands of Americans incarcerated across the country demanded fair pay for their work, humane living conditions, and rehabilitation access.