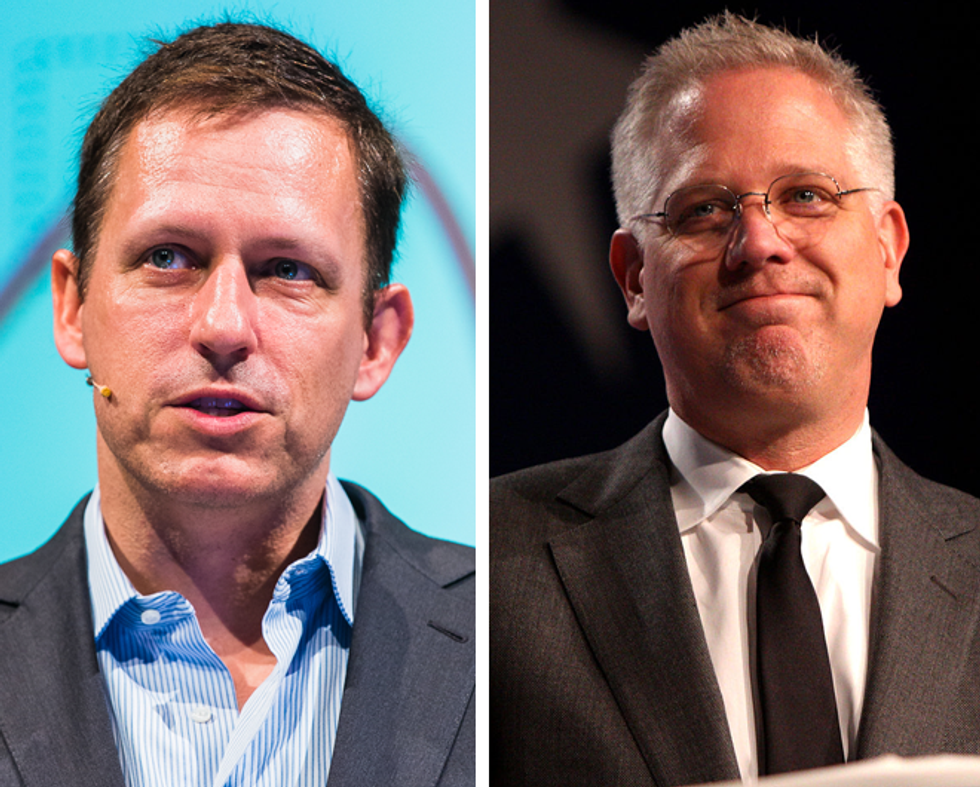 A news analysis in the New York Times ominiously warned that House Democrats are “discarding the lessons of successful midterms past and pressing only a bare-bones national agenda.” The article notes that they’ve chosen a new slogan, “For the People” (“For All the People” would have been preferable) and issued some relatively thin policy statements. The article’s authors then speculated that failing to adopt something along the lines of 1994’s House Republican Contract with America or House Democrats’ Six for ‘06 plan from 2006 might “raise questions among voters about how Democrats would govern.” Then there was more of the usual blather about Dems in disarray, the kind our own Laura Clawson rightly skewered here.

Democratic strategist Ed Kilgore had a great response to the NYT’s handwringing. He pushed back on the idea that Democrats have offered only a “bare bones national agenda,” and pointed out that Republicans retook the House in 2010, and the Senate in 2014, without any noticeable unified policy agenda. He also questioned just how important those aforementioned national platforms really were, citing polls that showed most voters in 1994 hadn’t even heard of the Contract with America. As for Six for ‘06, Kilgore himself couldn’t remember a single plank from it, and writing about national politics is his job.

Going further, Kilgore pointed out that this year’s midterm elections, like every other one, would see voters making their decisions primarily based on their feelings about the president, in particular given just how much oxygen Mr. 46 Percent of the Popular Vote takes up in our national conversation. Kilgore concluded:

Democrats could publish 100-page agenda books and together croak out poll-tested message slogans like frogs after a summer storm — but it’s not going to override the basic fact that Democrats are the party that’s not the party of Donald J. Trump.

Kilgore’s right about agendas and slogans, and that’s one hell of a simile. But there is a message Democrats can embrace—one that must be tweaked, of course, for local circumstances—which can attract voters specifically by contrasting our values and priorities with those of the Man Who Lost the Popular Vote.

Some progressives have been arguing with one another about our message, in particular about how to deal with the issues of race and class. Without rehashing that whole debate, one in which people seem to often be talking past one another, it is clear that the progressive message must address head-on both inequality based on various forms of identity (race, ethnicity, gender, gender identity, and more) and economic inequality. Anyone saying we should talk about ‘class, not race,’ or ‘race, not class’ is just wrong, but it also seems very few people actually argue in those absolutist either/or terms.

What matters most is what kind of message is strategically most effective, i.e., what will win the elections that will put progressives in power, and thus give them the ability to change laws, and change the personnel who carry out those laws, etc. Recent data released by the progressive group Demos, which was presented at a Netroots Nation Panel led by Demos senior fellow (also law professor at Berkeley, and the author of Dog Whistle Politics: How Coded Racial Appeals Have Reinvented Racism and Wrecked the Middle Class) Ian Haney LÃ³pez, has a lot to say on the matter.

Demos surveyed voters in Indiana, California, Minnesota, and Ohio, and gave them initial questions in order to sort them into three groups: Democratic “base voters” (these voters stated that more attention must be paid to racial issues), “persuadables” (they expressed somewhat contradictory views on race, saying both that America must focus more on racial issues and that focusing on race won’t help), and “opposition.” Demos then presented members of each of these groups with a series of messages, some that were colorblind messages focused on economic populism and others that offered a combined “race-class” approach. You can download the whole report here, on the Demos website. A long article at The Atlantic, by Elaine Godfrey, described the report in detail as well.

One specific facet jumped out. The survey tested a color-blind message: “To make life better for working people we need to invest in education, create better paying jobs, and make healthcare more affordable for people struggling to make ends meet,” and tested another, the same exact one with only one change: “people” was replaced by “white, Black and brown people.” The latter rated three percentage points higher than the former among base voters and eight points higher among persuadables. Win-win. This is how you square the circle between a message that is universal (which can leave voters of color feeling ignored, that the party doesn’t care about them), and one that is targeted to non-whites (which leaves white voters feeling ignored, that the party doesn’t care about them). From Godfrey’s article:

For many activists, this is just what they wanted to hear. Camille Rivera, the national political and legislative director for the Retail, Wholesale, and Department Store International Union, said she’s seen this in action as a progressive organizer. Black, Latino, and white people are all united by class and economic issues, she told me, and in her experience, stressing that they’re all “suffering under the same kind of economic instability” moves voters.

The survey tested a collection of 11 messages that addressed race and/or class, and the two that tested most strongly among the base voter group (“Working People” and “America’s Strength”) also did well among persuadables, whereas a “Colorblind Economic Populism” message garnered the lowest ranking from the base among the 11 messages, and also did worse among persuadables than did the two aforementioned race-class messages.

Here’s the “Working People” narrative (which earned a rating of 73 out of 100 from base voters and 67 from persuadables):

“No matter where we come from or what our color, most of us work hard for our families. But today, certain politicians and their greedy lobbyists hurt everyone by handing kickbacks to the rich, defunding our schools, and threatening our seniors with cuts to Medicare and Social Security. Then they turn around and point the finger for our hard times at poor families, Black people and new immigrants. We need to join together with people from all walks of life to fight for our future, just like we won better wages, safer workplaces, and civil rights in our past. By joining together, we can elect new leaders who work for all of us, not just the wealthy few.”

Here’s “America’s Strength” (which earned 74 from base voters and 70 from persuadables, again a good deal higher than the rating both groups gave the color blind message. This message garnered the highest rating from both white (67) and black (71) respondents):

“America’s strength comes from our ability to work together—to knit together a landscape of people from different places and of different races into one nation. For this to be a place of freedom for all, we cannot let the greedy few and the politicians they pay for divide us against each other based on what someone looks like, where they come from or how much money they have. It’s time to stand up for each other and come together. It is time for us to pick leaders who reflect the very best of every kind of American. Together, we can make this a place where freedom is for everyone, no exceptions.”

The Demos report concluded that, based on the data produced by their research, an effective message is one that:

This research points the way forward. Racial scapegoating is at the heart of Donald Trump’s message as a politician, and it has been going back to the day he announced his White House run by attacking people coming to the U.S. from Mexico as “rapists” and “drug dealers.” Even he admits what he’s doing, as seen in April, when he decided to dump his prepared remarks about his tax plan—which he called “boring”—and turn instead to more racial scapegoating about Latino immigrants. Trump’s constant harping about NFL players (mostly black) kneeling during the national anthem also falls into this category. There are simply too many other incidents of racial scapegoating to begin recounting them here.

The larger point is that this is our national message, one that brings together our opposition to Trump and our larger message about standing up for justice and equal rights for all as well as greater economic equality by hammering the point that the Orange Julius Caesar is the opponent of all those things. He’s the one screaming and yelling about racially and culturally divisive issues—aka scapegoating—in order to win over white voters who are being hurt by his economic policies.

Who is helped by Trump’s tax plan? Millionaires. Workers aren’t helped at all, and in fact the greater economic inequality created by the plan hurts them and the broader economy in the long run, and only puts our country further in debt. Who is being hurt by Trump’s sabotage of Obamacare—and would have been hurt even more had he and the Republicans in Congress succeeded in repealing it? Those same workers. The list goes on and on.

Sen. Elizabeth Warren, at Netroots Nation earlier this month, showed that she already gets the need to frame our message in the kinds of terms Demos talked about:

“According to Trump, the problem is other working people … black and brown, people who were born elsewhere, people who do not worship the same … or talk the same as Trump and his buddies … It is time to say no to the politics of division … We’re bringing the voices of working Americans—all working Americans—right along with us.”

Democrats are going to run on their opposition to Trump. We must give that opposition some badly needed content and heft by centering it on exactly this kind of message, one that works. Donald Trump wants to divide working and middle-class Americans along lines of race and culture while he and his corrupt administration send tens of billions of dollars up the economic ladder. If voters of every color see the election in those terms, there’s no way we can lose.