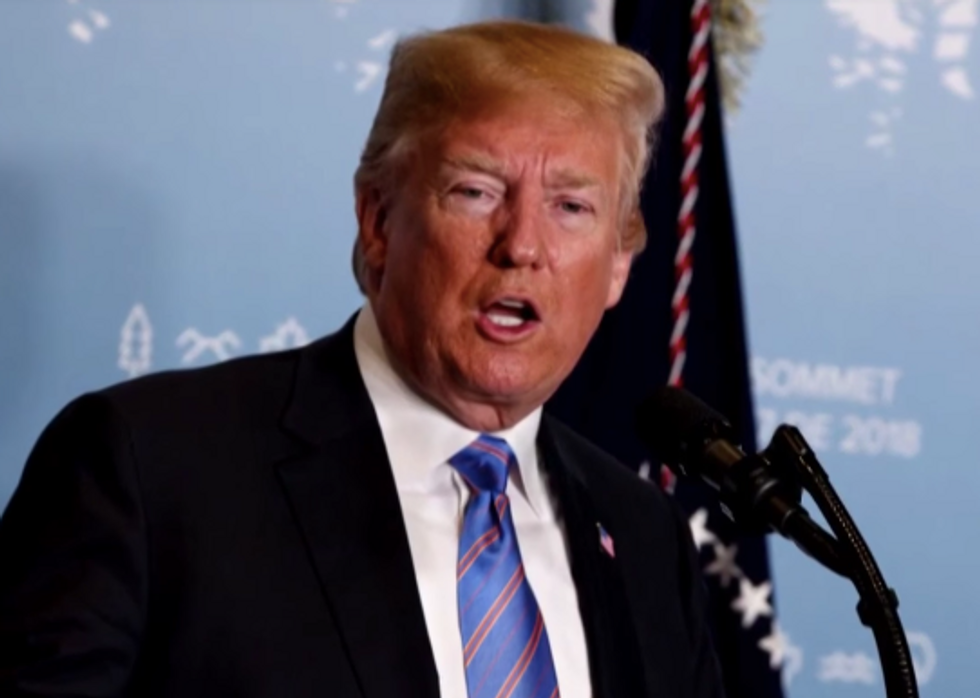 President Donald Trump has faced derision for his rant on Tuesday about Google search results being "rigged" against conservatives — likely motivated by a Fox Business interview between Lou Dobbs and the right-wing YouTube celebrities Diamond and Silk.

But Trump is eager to prove he is right about a grand Google conspiracy to silence right-wing content. As proof, he shared a video on Wednesday noting a key example of anti-GOP censorship: his own State of the Union address.

"For years, Google promoted president Obama’s State of the Union on its homepage," says the video. "When President Trump took office, Google stopped."

As Buzzfeed News reports, screenshots of Google's search page taken on January 30, 2018 clearly show a link labeled "Live! Watch President Trump's State Of The Union Address On YouTube." One of the screenshots was even posted by a Trump supporter to the pro-Trump Reddit board /r/The_Donald, captioned "Google homepage linking to the GEOTUS [God-Emperor Of The United States] address."

It is true that Google did not provide a link to Trump's first address to Congress in 2017. However, as a Google spokesperson told BuzzFeed, “We have historically not promoted the first address to Congress by a new President, which is technically not a State of the Union address. As a result, we didn’t include a promotion on google.com for this address in either 2009 or 2017."

The fact that the video was easily debunked as a hoax did not stop it spreading in right-wing circles. It was swiftly picked up by Gateway Pundit, InfoWars, the Russian propaganda network RT, and was also shared by Republican National Committee chairwoman Ronna McDaniel.

Trump has frequently complained that the size of his audience for major events is being suppressed or even just covered up. Immediately upon taking office, he accused mainstream news outlets of lying about the size of his inauguration crowds.

More broadly, Republicans have been waging a crusade for years against what they claim is "liberal bias" in mainstream media, which has increasingly spread to accusations against big tech platforms as well. There is little basis for these claims, but persecution narratives have staying power — regardless of evidence especially when the President of the United States lends them legitimacy.