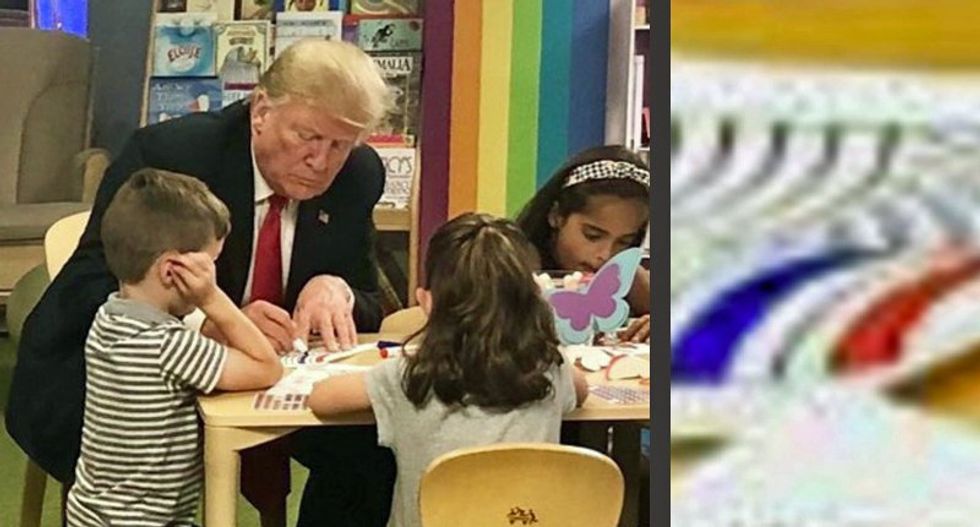 Embattled President Donald Trump failed spectacularly at a simple photo-op with children in Ohio on Friday.

As part of the tour, "they took part in a time-honored tradition: sitting in tiny desks alongside adorable kids in hope that the guileless innocence on the little faces surrounding them will take some of the heat off of their craven politicking," in the words of Esquire.

As part of the photo-op, Trump had the simply role of coloring between the lines with young children.

Zooming in on Trump's art project, however, revealed that commander-in-chief had failed at the simply task of coloring in an American flag.

"The flag of the United States shall be thirteen horizontal stripes, alternate red and white; and the union of the flag shall be forty-eight stars, white in a blue field," as the flag code makes clear.

Unlike the flag of the Russian Federation, there are no blue stripes in the American flag.

Despite being unable to color an American flag with a group of children, Trump has made his supposed love for the flag and anthem a centerpiece of his political outreach.

Hours after the bungled photo-op, Trump ripped CBS and ESPN over the NFL's protest controversy while speaking at the Ohio Republican Party's annual state dinner.

"What the hell is the NFL doing? Do they not have a clue? It's hurt them badly," said Trump, who has previously criticized the league for players who kneel in protest during the anthem. "They think they're doing something smart by not broadcasting the national anthem?"

Trump attempted a mulligan by starting over with a blank sheet of paper.