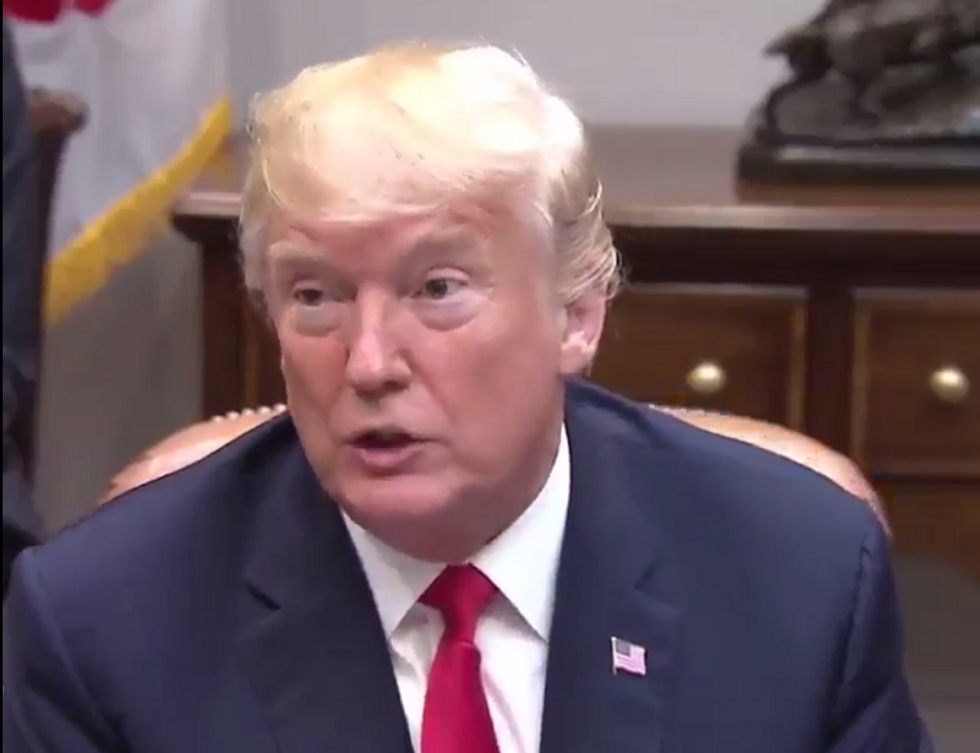 President Donald Trump sang his own praises Wednesday when discussing his administration's response to Hurricane Maria in Puerto Rico almost a year ago, despite the fact that a new report revealed that thousands more died than initial reports indicated — reports that Trump himself had touted as signs of his success.

"I think we did a fantastic job in Puerto Rico," Trump told reporters Wednesday when asked about the new report. "We're still helping Puerto Rico. The governor is an excellent guy, and he's very happy with the job we've done. We have put billions and billions into Puerto Rico, and it was a very tough one."

He made no mention of the fact that a new report found that an estimated 2,975 people were killed in the hurricane, making it nearly as deadly as 9/11. When Trump had visited the island in the aftermath of the storm, the death count was estimated to only be 16 — a figure he bragged about.

"Every death is a horror," Trump said at the time. "But if you look at a real catastrophe like [Hurricane] Katrina and you look at the tremendous -- hundreds and hundreds of people that died — and you look at what happened here with, really, a storm that was just totally overpowering ... no one has ever seen anything like this."

San Juan Mayor Carmen YulÃ­n Cruz Soto, who Trump insulted in the aftermath of the storm when she criticized the emergency response, spoke to Marie Claire Wednesday about the administration's failure.

"A couple of weeks after Hurricane Maria hit, I yelled to the world: 'We are dying here! And they are killing us with their bureaucracy and their inefficiency!'" she said. "It was evident when you walked the streets, when you tended to the sick, the neglect that followed: The Trump administration’s way of handling the Puerto Rican humanitarian crisis, the lack of a sense of urgency, the lack of respect for human dignity."

She continued: "You can kill people with a bomb and you can kill them with neglect, and what happened in Puerto Rico is that people were left to die because the government was unable to look at reality, admit what was taking place, and take a different route to make this turn out a different way. The second thing that went through my mind was a profound rage, because these deaths—we’ll never know how many of them—were preventable."

In March, Politico reported that official statistics suggested the administration had grossly neglected Puerto Rico as compared to Texas, which was hit by Hurrican Harvey:

No two hurricanes are alike, and Harvey and Maria were vastly different storms that struck areas with vastly different financial, geographic and political situations. But a comparison of government statistics relating to the two recovery efforts strongly supports the views of disaster-recovery experts that FEMA and the Trump administration exerted a faster, and initially greater, effort in Texas, even though the damage in Puerto Rico exceeded that in Houston.

Within six days of Hurricane Harvey, U.S. Northern Command had deployed 73 helicopters over Houston, which are critical for saving victims and delivering emergency supplies. It took at least three weeks after Maria before it had more than 70 helicopters flying above Puerto Rico.

Nine days after the respective hurricanes, FEMA had approved $141.8 million in individual assistance to Harvey victims, versus just $6.2 million for Maria victims.

Watch the president's comments below: