As Trump and Right-Wingers Amp Up Attacks on Social Media, Will Silicon Valley Turn Down Their Megaphones? 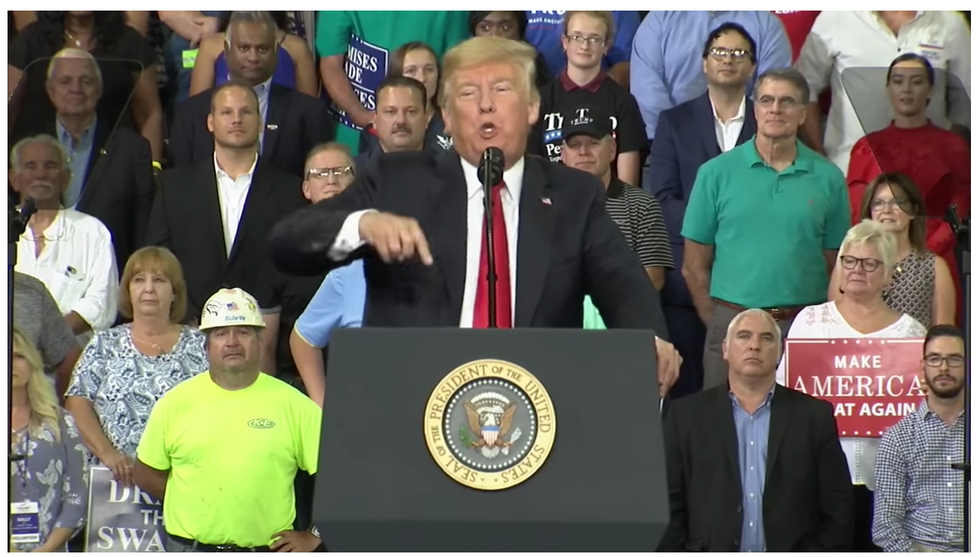 Next week, Congress will hold dueling hearings on social media’s ongoing tug-of-war with malevolent partisans, neither of which will likely shed any light on the elephant in the tech sector’s living room: how their platforms’ design empowers propaganda—and they’re not turning off the switch.

The Senate inquiry is at least based in reality. Those defrocked pages were real, were taken down, and apparently have traceable ties to overseas spy agencies. Whether or not they had any real-world impacts is another question. You can bet this scripted affair, where tech execs will be alerted beforehand what they will be asked about, probably will not touch on a recent German study that looked at Facebook’s role in 3,335 hate crimes and attacks on refugees in that European country in the past two years.

The locales where Facebook users spent the most time on the site had the most anti-refugee violence, the academics explained—and they said why that was the case. Facebook, like other social media platforms, gives users a semi-public place to congregate around values or ideas or issues that might not be socially acceptable. Every now and then, someone who goes deep in this spinning vortex leaves the toxic bubble and lashes out in the real world—with threats or real violence.

Facebook’s “algorithm is built around a core mission: promote content that will maximize user engagement. Posts that tap into negative, primal emotions like anger or fear, studies have found, perform best and proliferate,” the New York Times explained in an investigative report based on the German study. “Even if a minority of users express vehemently anti-refugee views, once they dominate the newsfeed, this can have consequences for everyone else… Over time, they [the most persistent posters] appeared to lose sight of the line separating trolling from sincere hate.” Strikingly, the academics found, “whenever internet access went down in an area with high Facebook use, attacks on refugees dropped significantly.”

That German study highlights the real threat from malicious online actors. It isn’t Russian meddling in the mechanics of voting in America; it’s trolls and obsessed individuals who are empowered by social media platforms that are giant surveillance machines, tracking and analyzing everything users do in the service of bringing paying advertisers to micro-targeted audiences. That technology is one thing when it comes to selling towels or appliances; it’s another when malevolent actors or arch-partisans or foreign spies use that platform to incite polarization, fan societal conflict and sow violence.

But one doesn’t have to go to Europe for examples of where social media has normalized bigotry, conspiracy and grievance politics. You can watch President Trump’s latest MAGA rally in Indiana this week, where his faithful relished the way Trump blames everyone else (but them) for their problems. You can look at Thursday’s FBI arrest of a California man who threatened to kill Boston Globe journalists for being “the enemy of the people”—language that tracked Trump’s remarks the same day in Indiana calling CNN, the New York Times, and the Washington Post “dishonest, terrible people.” Or you can look at what other congressional Republicans are doing, playing copycat to Trump by accusing Silicon Valley media of censoring Trumpians like them.

On Wednesday, the Senate will listen to Facebook and Twitter executives tell how they have tamped down on “foreign influence.” Meanwhile, the House Energy and Commerce Committee will hold a more juvenile and patently absurd hearing on how the biggest social media platforms purportedly are censoring conservative views.

As Rep. Stephen Scalise, the Louisiana Republican, insistently tweeted, he would demand answers as to why “supporters of @realDonaldTrump are consistently suppressed by Twitter.” Not to be outdone, Rep. Jim Jordan, the Ohio Republican “shadow-banned” by Twitter amid sex-abuse allegations, replied, “Twitter says just a glitch in their algorithm. Really??”

Is using Twitter to accuse Twitter of censorship an example of suppressed speech? But this silliness doesn’t stop there.

Not one to be left behind, Utah Sen. Orrin Hatch on Thursday released a letter urging the Federal Trade Commission to look at Google’s “anti-competitive conduct,” because, as Trump and other right-wingers have incorrectly stated, Google has “decided to remove from its platform legal businesses that the company does not agree with.” Perhaps Hatch is referring to right-wing provocateur and hate-monger Alex Jones, who keeps losing in a lawsuit brought by parents of murdered children at Sandy Hook Elementary School, which Jones repeatedly said was a government-planned mass shooting.

What’s most insidious about all these claims is the reality that social media helped elect Trump and legitimize the far right as much as any other factor in recent political history. Brad Parscale, who ran Trump’s 2016 digital campaign and will manage his 2020 reelection effort, credited Facebook micro-targeted advertising machine for the victory. They tested 5.9 million ads, compared to Hillary Clinton’s campaign testing 66,000 ads—where whatever drew responses was more widely used.

If social media wasn’t so valuable to America’s troll-in-chief, his various 2020 re-election political committees would not be the top nationwide spender on Facebook ads in July and top spender on political ads on YouTube (owned by Google) in August. As technology writer Kara Swisher noted this week, “Tech has, in fact, been very, very good for conservatives from the get-go and very much so for Mr. Trump and his minions.”

If you want to inhabit a world without Trump’s daily tirades (this week’s threats to sanction Google, the World Trade Organization, Canadian milk producers, European automakers, and on and on) or a political culture that elevates the visibility of those fanning incivility and conflict, the culprit is partly the messaging machinery—not just the messed up messengers.

Pay close attention to these upcoming congressional performances. On the House side, right-wingers will make all kinds of noise about sacredness of free speech to defend their trolling and bullying. And they likely will be unsatisfied after hearing explanations of why Google Search hasn’t ranked PJ Media as high in its search results as the New York Times (which even Silicon Valley libertarians said was an idiotic line of attack).

And on the more somber Senate side, it is likely that Facebook, Twitter and Google may say the time has come for some regulation of online political content (no doubt based on what they are already doing). But will they acknowledge the role social media’s architecture and business model has played in empowering extremists, social divides and conflict? Will they suggest doing anything meaningful about it—such as turning down the megaphones they built—or will they dodge responsibility?