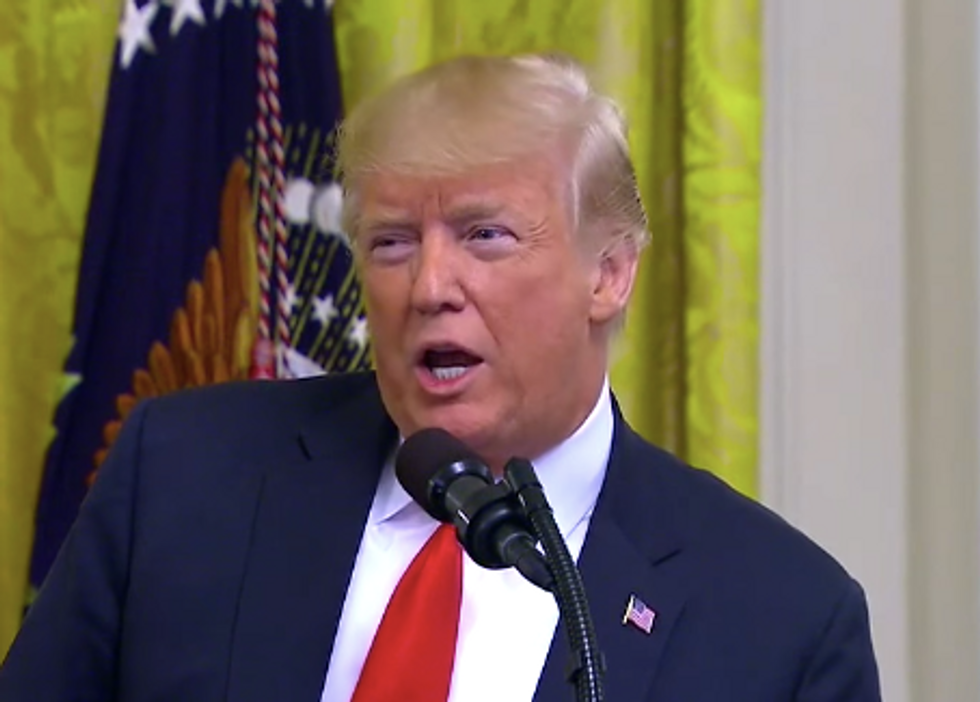 In a new report dropped on Monday morning, the Office of Inspector General for the U.S. General Services Administration (GSA) suggested that President Donald Trump may have personally intervened in the now-canceled construction of the new FBI headquarters. The proposed site just happened to be across the street from the Trump International Hotel in Washington, D.C. — which Trump's family business also happens to have on lease from the GSA.

The report says that GSA administrator Emily Murphy may have omitted key information about these discussions when she testified before Congress about why the longstanding plans to relocate the FBI headquarters had been scrapped.

Former Office of Government Ethics (OGE) Director Walter Shaub hammered Murphy in the wake of the report, pointing out that during her testimony, she never made it clear to Congress that Trump had given the agency any direction at all:

As CNN notes, "The report does not conclude why Trump was personally interested in the project," and "also does not note the FBI building's proximity to his DC hotel." A spokeswoman for the GSA insists that Murphy's testimony was "truthful," and the agency's cost estimates were "accurate, transparent, and more representative of the full costs of the project than the analysis put forth in the IG review."

Nonetheless, the circumstances surrounding it are enough of a coincidence to create the appearance of impropriety. Especially since, according to the report, White House officials sought to assert executive privilege to block the release of information about what was discussed at meetings between Trump and GSA officials:

Early in the review the OIG learned that during the course of GSA’s decision-making on the revised FBI headquarters plan, Murphy met with the President on January 24, 2018, about the project. When we asked about the meeting, some GSA witnesses refused to answer any questions about this and other relevant White House meetings, and some of those said they were told or believed the information was subject to executive privilege. We sought to determine whether GSA took the position that executive privilege precluded sharing information with the OIG, which is part of GSA and within the Executive Branch. Ultimately, GSA’s Acting General Counsel informed us that he received direction from White House Counsel’s Office regarding the matter. He told us that pursuant to those directions, GSA employees were authorized to disclose to the OIG the existence of the White House meetings, discuss who attended, and discuss any high level agreements that resulted from the meetings; but not to disclose any statements made by the President.

The Trump Organization's lease on the Old Post Office building, which was renovated into the Trump Hotel, is already a subject of fierce controversy. Critics, including some state attorneys general, allege the deal runs afoul of the Emoluments Clause of the Constitution because foreign dignitaries are allegedly spending above market value rates to stay at the Trump Hotel as an under-the-table means of currying favor with the president. The matter is working its way through federal courts.