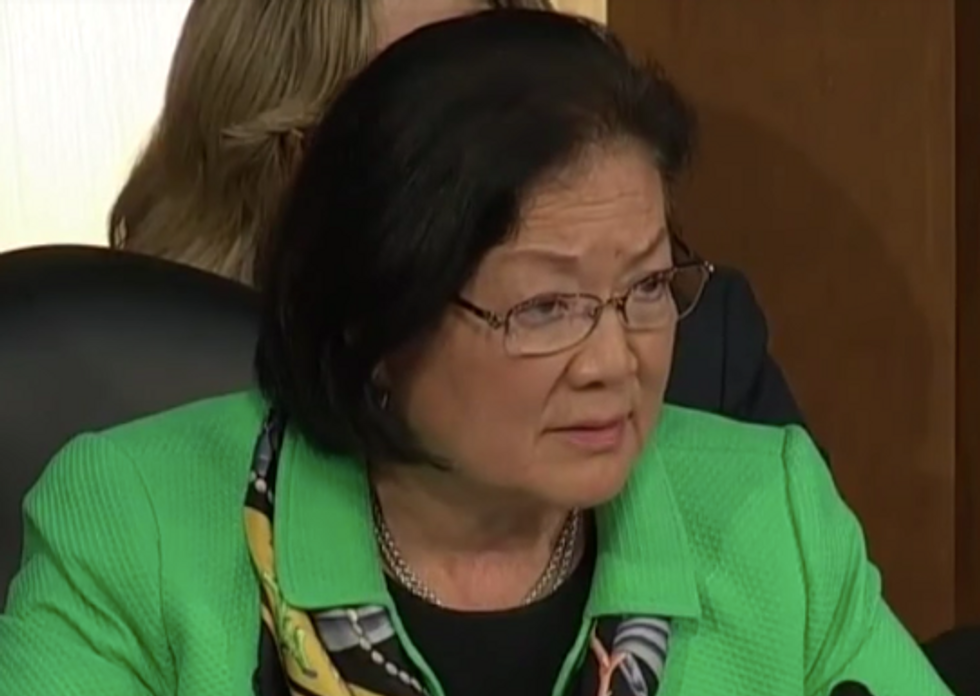 Senator Mazie Hirono (D-HI) has been showing exceptional leadership in the Trump era. Today she again showed other Democrats how to stand up and fight back. After the felony guilty verdicts for former Trump campaign manager Paul Manafort and Trump’s personal attorney, Michael Cohen, entered guilty pleas on eight federal felonies, Senator Hirono has had enough and is leading the charge to stop the Judge Kavanaugh Supreme Court nomination in its tracks.

This is the proper framing for all Democrats. There is no universe where it should be acceptable for a president embroiled in a criminal investigation, one that is inching closer and closer to his doorstep by the minute, to have the privilege of nominating a Supreme Court nominee to a lifetime appointment. Even worse, a judge who may very well end up presiding over Donald Trump’s own cases before the court. ABSOLUTELY NOT. This should be a red line for not just Democrats, but all senators. This is about law and order. This is about the very foundation of American justice.

Senator Hirono is not the only one calling for a delay in confirmation hearings. Democratic leader Sen. Chuck Schumer is also ringing that bell.

We need to get their backs. Please pick up the phone and call your senator, regardless of state, regardless of party and demand a delay in Kavanaugh’s hearing, especially if you live in Maine, where Senator Susan Collins is once again trying to portray herself as a centrist, while once again supporting an extremist nominee. She can end this nightmare by herself and she needs to hear from you TODAY.

Republicans are hellbent on cramming this nomination in before the American people have their say in November, despite it being increasingly clear that Donald Trump’s actions leading up to the election may very well have been criminal, as well as his repeated and continued efforts to obstruct justice and cover-up these crimes. ENOUGH! The phones of every single member of Congress and the Senate should be ringing off the hook today.

Other senators are taking Hirono’s lead. There should absolutely not be any confirmation hearing during an ongoing criminal investigation, especially now that Donald Trump has been named as an unindicted co-conspirator. TWEEET