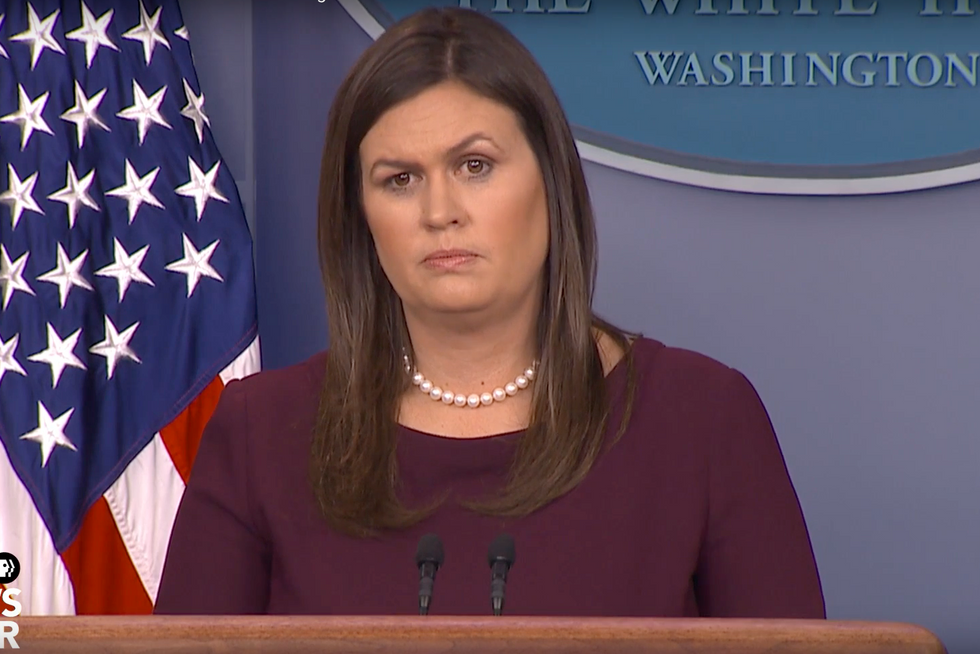 As she was bombarded with questions from reporters about Omarosa's tapes and allegations and refused to guarantee there was no tape of President Donald Trump saying the N-word, Sanders tried to defend Trump's use of nondisclosure agreements to block his former campaign and White House officials from criticizing him or blowing the whistle. And she failed miserably.

"Bearing in mind the Trump campaign's announcement that it's pursuing arbitration of Omarosa necessitates attention and a major national focus, can I ask you once more about the practice of signing people to nondisclosure agreements?" said one reporter. "Let me ask you what it says about expressions of loyalty or lack thereof? Why do people need to be contractually obligated to, forever after and in perpetuity, never say anything negative about the president, any member of his family, any product they should produce — why is that necessary?"

"Corporations, to protect their corporate interests," he pressed her.

"Despite the contrary opinion, it's actually very normal, and every administration prior to the Trump administration has had NDAs, particularly specific for anyone who had a security clearance," Sanders replied.

Immediately the crowd of reporters began murmuring and shouting her down, and for good reason: this is a lie. As The New York Times notes, it is "highly unusual" for government officials to be forced to sign nondisclosure agreements.

Given her reference to security clearances, Sanders may be trying to draw an equivalence between Trump's demand no staffer ever speak ill of him under the threat of legal action, and longstanding federal statutes governing the security of classified information, which is ridiculous. Trump's ego should not be a national security matter. Moreover, as the reporter touched on, these agreements were used to silence people in Trump's campaign as well as his administration.

"Right now, what the Trump campaign is doing is he's forcing her, essentially, to defend herself and potentially even pay damages," he said. "Why is that necessary?"

Even Sanders had no answer to that.

"That's a question you would have to ask the Trump campaign," she said. "It's certainly not a question that I could answer, as someone in an official government capacity."

Every day, it is getting harder and harder for Sanders to put any favorable spin on the Trump's behavior. And the press corp's frustration with her deflections is becoming palpable.