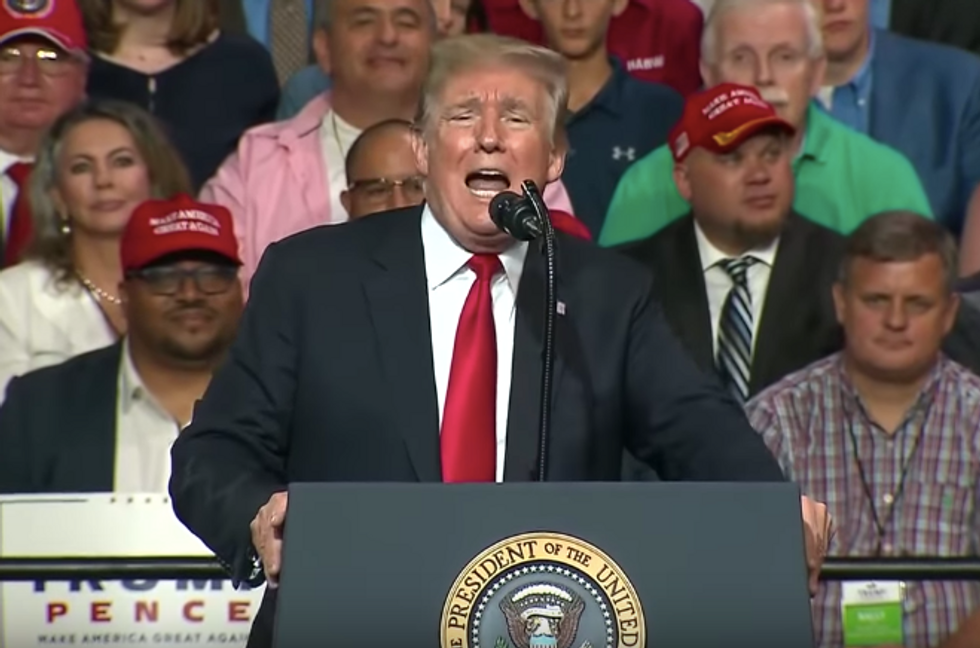 I recently returned from a Trump fast. It was actually a news fast, but since the news these days is pretty much all Trump all the time, a Trump detox is what it turned out to be.

It was in the high desert, in another country, at a place with mercifully lousy cell service, blissfully bad Wi-Fi, a single TV and one tiny burlap sleeping bag per guest to sequester your iPhone. It was easy to avoid the newspapers, and if someone wanted to talk Trump with you, it was considered perfectly courteous to hold up an open palm and wave the conversation off.

When I got back home to the cacophony, Omarosa and Giuliani were all over the airwaves, and within hours it was Cohen and Manafort. Half my Facebook feed was, “Did you hear the tapes?” The other half was, “Is impeachment next?” It was like I’d never been away.

But a week without politics, a week of yoga and hiking, had not only lifted my spirit. It had also sensitized me to what we really talk about when we talk about Trump.

I know I’m simplifying, but it strikes me that virtually all Trump news, and all conversations about him, come down to two questions: “Did you see what he just did?” and “How the eff is this going to end?”

But as it turns out, those are both actually the same question, and they’re about the same thing: not Trump, but story.

Our brains are hard-wired for story. We’re suckers for it — “Once upon a time” is the best pickup line ever. “Can you believe what just happened?” is what every storyteller wants every plot point to make you feel. Deploying danger, surprise, conflict, suspense and all the other tricks humans have been honing since we sat in caves around campfires, a narrator’s Task One is to grab hold of our attention and hang on to it for dear life. And because the ending of a story is what makes everything that came before it seem inevitable, Task Two is to keep us aching to know how it will all turn out. Which is to say, Task Two is the same as Task One, namely the imperative to capture our attention — which is my working definition of entertainment.

The ur-story about attention is Scheherazade, the frame story for the Arabian Nights fables, and it goes like this: When the king discovers his wife’s infidelity with a kitchen servant, he has her beheaded. From that day forward, he deflowers a virgin every night and, to prevent her from ever being unfaithful to him, in the morning he has her beheaded.

After many virgins and much bloodshed, Scheherazade, over the protests of her father, the vizier, volunteers to be the next one brought to the king’s bedchamber. After he takes her maidenhood, she begins to tell him a story, The Story of the Merchant and the Demon. She holds the king rapt. At sunrise, her tale has not yet reached its end, so the king stays the executioner’s hand, and he has her come back the next night. When she returns, Scheherazade picks up the thread of the first story, but instead of finishing it, she has a character within it start telling a new story. Again, the king is spellbound; again at dawn, he orders her to return at sundown. Night after night, she never runs out of material, and she never gets to an ending. This goes on for 1,001 nights, when at last he repents of his decree and makes her his wife.

Trump is our Bizarro World’s Scheherazade. For her, holding the king’s attention — entertaining him — was literally a matter of life or death. If she bored him, she’d be done for. For Trump, holding our attention is a matter of his political life or death. As a narcissist, it’s also a matter of his psychic life or death. Every tweet thread, every Hannity call-in, every Sarah Sanders briefing, is his bid to keep the narrative going. The overarching purpose of each violated norm, each outrageous hyperbole, each demeaning nickname, is to prevent us from ever turning away.

Because the business model of the news media is to sell eyeballs to advertisers, holding audience attention is for them a matter of economic life or death. I can imagine the financial apprehension with which news executives contemplated a Hillary Clinton presidency. When Trump gloated that he was a cash cow for cable news ratings and newspaper subscriptions, he was right, and they knew it. As CBS CEO Les Moonves, whose network owns 16 TV broadcasting licenses, said about the political circus Trump brought to town, “It may not be good for America, but it’s damn good for CBS…. Bring it on, Donald, go ahead, keep going.”

Trump was made in heaven for journalistic profit. But how is he made for democracy? I can’t get out of my mind a New York Times story about a Bernie Sanders event in Anaheim during the primaries. A 45-year-old Bernie supporter at the rally told a Times reporter that if his candidate didn’t make it, he’d switch — not to Hillary, but to Trump. Why? It wasn’t about an issue or a policy. It was about entertainment. A Clinton Administration, he said, would be “boring,” but a Trump White House would be exciting. That’s a show he’d watch.

Did his motive for supporting Trump bother him? Did his cure for boredom come with a cost to the country? Ever since Trump’s victory, a lot has been said about the need to empathize with his voters, to see things through their eyes. But I can’t re-read the words of that soon-to-be ex-Bernie voter, five months before Trump’s election, without my blood running cold. “A dark side of me,” he said, “wants to see what happens if Trump is in. There is going to be some kind of change, and even if it’s like a Nazi-type change, people are so drama-filled. They want to see stuff like that happen. It’s like reality TV. You don’t want to just see everybody be happy with each other. You want to see someone fighting somebody.”

You wanted fighting? You got fighting. Had enough?

I can think of two ways out of our predicament. In a strangely satisfying way, they’re the opposite of each other. One way out is with Louis Brandeis and Neil Postman. In his famous concurrence to Whitney v. California in 1927, Justice Brandeis wrote that “to avert the evil” of false speech, “the remedy to be applied is more speech.” To update his words for this Age of Show Business, as Postman called our Trump times in “Amusing Ourselves to Death”: The remedy for false drama is more drama, better drama. We need better stories. We can fact-check Trump till the cows come home, but facts aren’t narratives. The leader who liberates us from “somebody fighting somebody” will celebrate ourselves, and sing ourselves, and tell a new story of America, from origin to destiny.

The alternative way out is via what that Bernie supporter most dreaded: boredom. Or, as we might call it, “calm.” Terrified by the prospect of having nothing to pay attention to, we have let media persuade us that instant awareness of Michael Cohen’s plea deal is essential to our being good citizens. Imagine instead that what we pay attention to is, actually, our attention. Imagine that boredom, disinterest, is an appropriate civic response to the circus. Imagine that our intellects focus on how we can improve our society but that the awareness we cultivate is the smell of the sagebrush, the light on the mountain, the silence of the stars, the pace of our breath. Imagine, that is, a path to the body politic, and the way to the greater good, that travels through a healthy body, and not through circus politics.