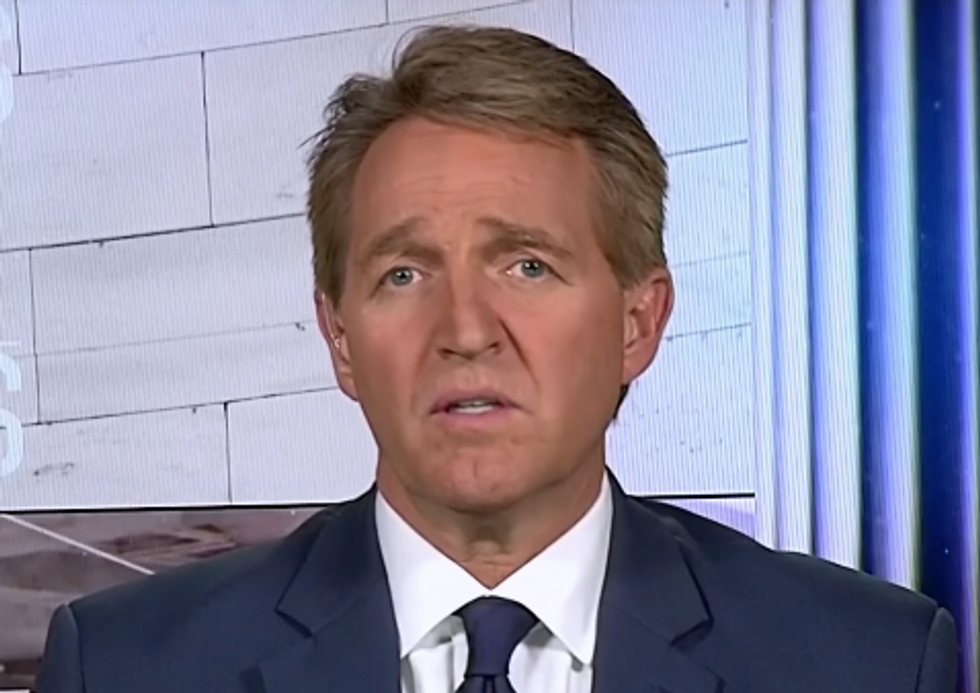 Arizona Sen. Jeff Flake was on Meet the Press this morning, in part to reminisce about his friend Sen. John McCain, and in smaller part to weigh in on the sitting President of the United States being marked as an unindicted co-conspirator in an illegal campaign finance scheme revolving around the payment of "hush money" to mistresses in order to keep their stories out of the press during the last critical weeks of the 2016 election. This is only tangentially related to the larger probe into whether or not the same candidate and campaign team sought and received the assistance of Russian government actors in order to procure damaging information about his campaign opponent, the accusation of “collusion” that has put President Co-Conspirator into an unending daily fit for two solid years now.

The ever-courageous Flake had opinions.

CHUCK TODD: [...] What should the U.S. Congress do now to look into this accusation that the sitting President of the United States was, apparently -- in a court of law, helped -- directed somebody to commit a federal crime?

SEN. JEFF FLAKE: Well, first, we need to make sure that the Mueller investigation is allowed to continue and be completed. We've passed legislation in Judiciary Committee to that effect. I hope that it's brought up on the floor. Some of the investigation obviously isn't the Mueller investigation. It's I think the Seventh District of New York. That will continue as well. So I think to make sure that there is a separation of powers and Congress assumes its constitutional role. That's the most important thing we can do at this point.

CHUCK TODD: So do you think though that means just protecting Mueller or holding some hearings?

SEN. JEFF FLAKE: No, I think protecting the Mueller investigation. We don't want to get involved in terms of overlapping what's going on there. I think Bob Mueller is moving forward as he should. And that needs to continue. There is a concern that the president has ramped up rhetoric about perhaps firing the attorney general. I hope that that doesn't happen. If it does, we'll deal with it at that time.

Ah, yes. The unindicted co-conspirator currently in the White House is making noises about firing his attorney general and taking more aggressive executive steps to bring investigations of his own behavior to a close, and senators like the not-quite-mavericky Lindsey Graham are publicly opining that maybe Trump firing his attorney general in order to impede the investigations into his crimes would be within his rights to do. As one of the most prominent Republican voices against Trump's various excesses, in any venue that does not require actual votes against those excesses: Your thoughts, Sen. Flake?

Look out, criminal co-conspirator now leading the Republican Party: Sen. Jeff Flake is countering with a bold public proclamation of please don't. Reconsider your attempts to do away with the rule of law in our great country or you will be further met with a well I never, followed by an aggrieved look of disappointment.

Mr. Flake, we will repeat, is one of the few Republican lawmakers willing to express any contrarian positions towards Donald Trump's acts at all. Spelunkers are still looking for the moral compass of a certain Sen. Mitch McConnell, who appears to have dropped it in a crevasse.