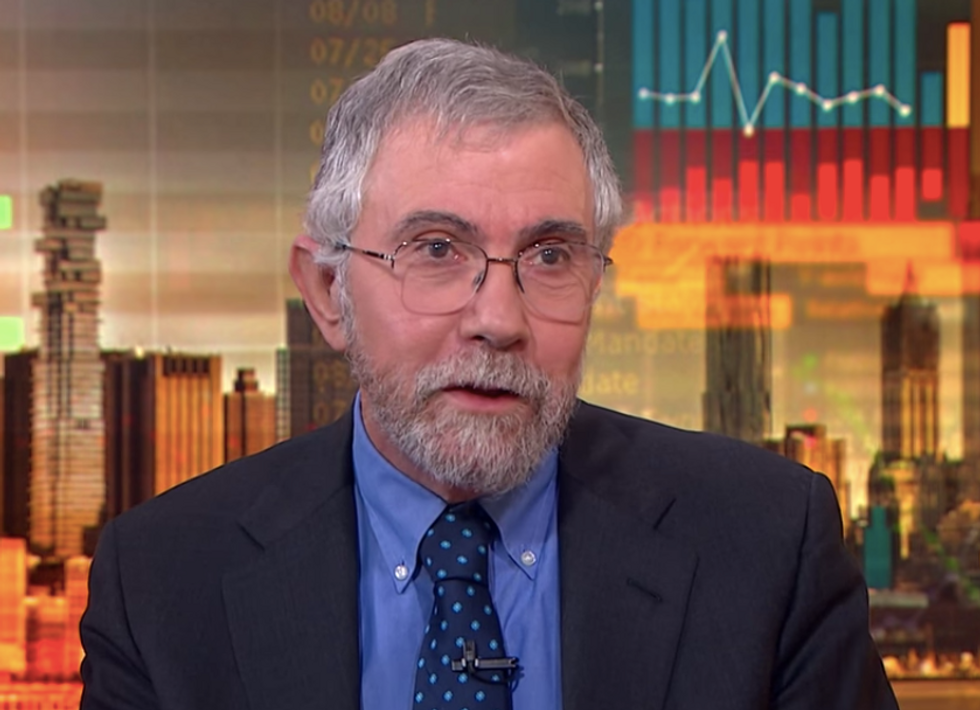 Americans conservatives are frequently lighting their hair on fire to warn the country that growing support for socialism will soon place the United States on the path to ruin like Venezuela.

Meanwhile, political figures like Sen. Bernie Sanders (I-VT) and New York congressional candidate Alexandria Ocasio-Cortez who identify as Democratic Socialists have won enthusiasm from voters and nationwide attention, and many suspect that their views are gaining traction within the Democratic Party. And according to a recent poll by Gallup, more Democrats have a positive view of socialism (57 percent) than have a positive view of capitalism (47 percent).

Economist Paul Krugman argued on Twitter Wednesday that despite their dire warnings, conservatives have only themselves to blame for the popularity of socialism.

"It really is important to realize that Republicans have systematically identified the social safety net with socialism," he wrote.

For example, in 2008 John McCain called Barack Obama's proposals for universal health coverage "socialism." And again in 2012, Mitt Romney ran against Obama and said the then-president wanted to bring "European socialist policies" to the United States — referring to countries like Denmark.

"So if you think Denmark looks pretty good, Republicans say you're a socialist, and people start to think socialism looks pretty good too. If the GOP then pretends that support for 'socialism' means wanting government control of the means of production, that's bait-and-switch," Krugman writes. "I mean, I know that Trump and others have problems with geography, time zones, and all that, but Denmark is not the same country as Venezuela."

One aspect of this dynamic that Krugman doesn't mention is the conservative embrace of "capitalism." Republicans have often tried to brand themselves as the defenders of capitalism — by which they mean a very limited, unequal, and often vicious form of capitalism. This branding can push people away from capitalism as much as it can push people toward socialism.

But while Republicans have warped the debate by making everything debate about grand philosophical issues, when candidates like Sanders and Ocasio-Cortez are pressed on exactly what policies they actually want, many of their answers are actually quite popular: universal health care, greater access to higher education, a higher minimum wage, smart regulation of the financial industry and polluters, higher taxes on those who can pay for them, and increased support for families and children.

Whether these policies are called these "socialism," "democratic socialism," "social democracy" or some other label, they clearly garner a lot of enthusiasm. And if conservatives try to attack these policies by using "socialist" as an epithet against them, they're likely to only increase support for socialism.