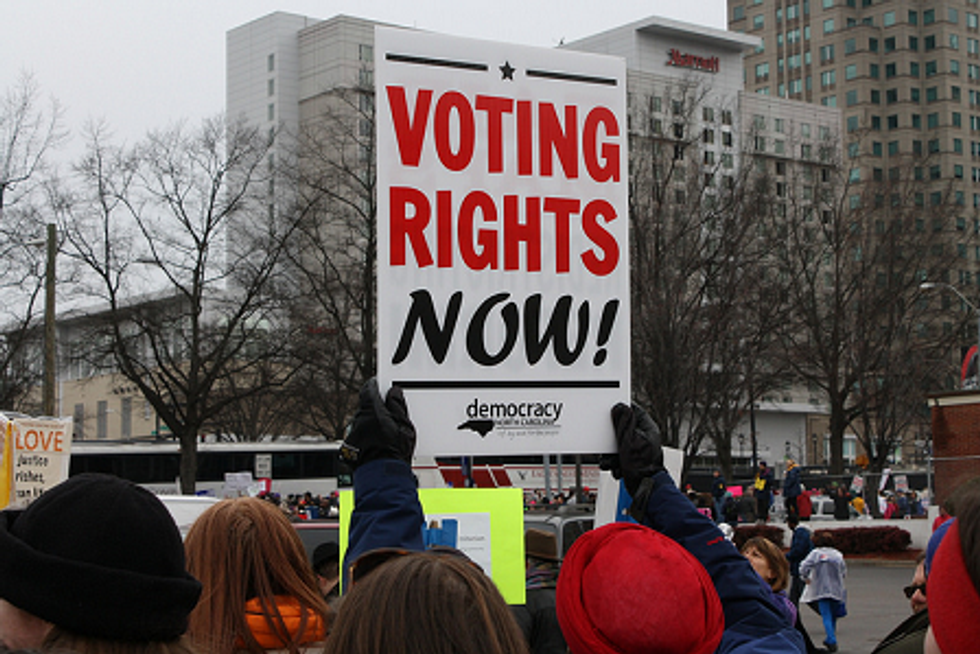 With less than three months to go before the midterm elections, a federal three-judge panel in North Carolina has struck down the state's GOP-drawn congressional map as an unconstitutional partisan gerrymander. Perhaps most amazingly, the judges have refused to rule out the possibility a new map might need to be drawn before the election takes place.

The 2-1 ruling in Common Cause v. Rucho, which spans nearly 300 pages, could be a huge victory for fair elections in the Tar Heel State. A hypothetical nonpartisan congressional map in North Carolina could result in Democrats winning 2 to 3 more seats than they would have otherwise, significantly impacting Democratic chances of winning control of the House.

The case is the culmination of a long-running battle between the GOP-controlled North Carolina General Assembly, which in 2011 drew arguably the most aggressive gerrymander of any state congressional delegation in America, according to voting rights activists.

In 2015, 31 residents of North Carolina sued the state, arguing the districts were drawn to pack African-American voters into districts that diluted their voting power. Federal courts agreed, ordering North Carolina to redraw its congressional maps — but they responded by drawing a strictly partisan gerrymander instead of a racial one. The process was blatantly rigged, with GOP lawmakers setting as an explicit rule that the map must create 10 GOP districts and 3 Democratic ones, even though the state's voters are among the most moderate in the country. State Rep. David Lewis, a key architect of the districts, said the reason the map should elect 10 Republicans and 3 Democrats is that "I do not believe it’s possible to draw a map with 11 Republicans and 2 Democrats."

Outraged, Common Cause of North Carolina and the League of Women Voters sued to get the remedial map thrown out as well. Once again, a federal court sided with the plaintiffs — but the Supreme Court vacated their decision and sent it back to them for further review. The latest ruling, reviewed in accordance with the Supreme Court's decision in Gill v. Whitford, reaffirms that the map is indeed an unconstitutional gerrymander.

Ordinarily, federal courts would never consider ordering a congressional map redrawn this close to an election, when primaries have already taken place and ballots are being printed. But in this case, the judges argued the legislature itself made the case for why redrawing the maps would not cause undue confusion in the electoral process.

The court noted that the legislature has repeatedly changed election rules in the middle of the race this term in an attempt to benefit Republican incumbents, including eliminating primaries altogether in judicial elections — therefore, the legislature itself must not consider it necessary to take primaries into account. Furthermore, the court notes, a state court fight over those rule changes resulted in a delay on printing November's ballots, meaning that changing the maps now would not result in anyone having to reprint anything.

The court has not made any final decisions on what to do. All parties in the case are asked to argue for whether or not they should allow the existing maps to be used in this election, or to let them take effect just this once before redrawing them next year. Furthermore, the court has also not yet decided whether, if the map must be redrawn immediately, to allow Republicans in the state legislature to try to redraw the maps again or to appoint a special master to do it for them, noting that after two gerrymanders, they might not be trusted to draw a fair map a third time. But the court also said that if the legislature wants to try to draw a fair map, they should start immediately, and have it passed by 5:00 p.m. on September 17th.

There is uncertainty the ruling will stand if a higher court gets involved. But with Justice Anthony Kennedy out of the picture and the court temporarily split 4-4 between liberals and conservatives, it may be harder for the Supreme Court to stay the ruling than it would be normally.

A lot could depend on whether Senate Republicans can get Brett Kavanaugh — who is generally hostile to voting rights — confirmed as a justice, and if so, whether it can be done before the deadline laid out in the ruling.