Is Melania Trump the Least Visible First Lady in Generations? 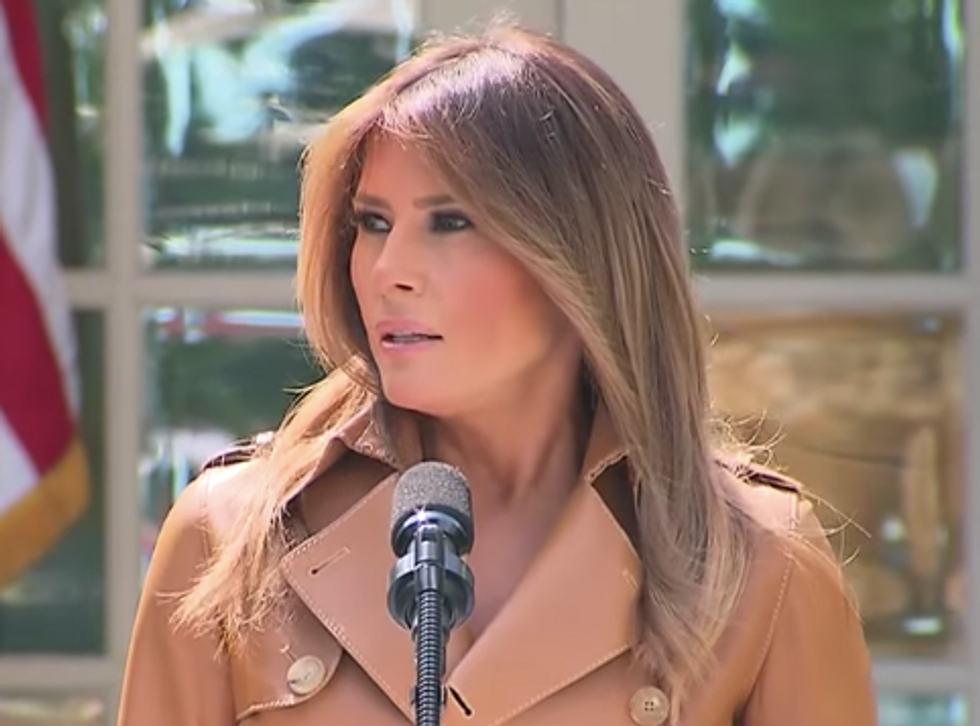 From Eleanor Roosevelt to Michelle Obama to Nancy Davis Reagan—from Betty Ford to Hillary Clinton—first ladies of the past were in the news consistently. Reagan was famous for her anti-drug campaign, while Clinton addressed health care reform as first lady and went on to serve two terms in the U.S. Senate. And Roosevelt had much to say about her husband’s New Deal reforms. But compared to other first ladies, Melania Trump has kept a relatively low profile. And she might be the least visible first lady the U.S. has had in generations.

The first lady did find herself in the news in May when she announced a campaign against cyber-bullying as part of her Be Best program. Melania Trump has been calling for polite and respectful behavior online, which Republican strategist and CNN pundit Ana Navarro found to be ironic in light of the president’s online behavior.

Far-right commentator Tomi Lahren, who never misses a chance to paint Trumpistas as victims of persecution, was quick to defend Melania Trump after Navarro posted a negative tweet about her. On Twitter, Navarro commented that Melania Trump was hardly in a position to criticize cyber-bullying given that her husband was a major cyber-bully—and when Lahren appeared on Fox News’ “Fox and Friends” on August 22, she declared, “I have never seen a first lady be attacked like this, like Melania Trump has, for the good works and the good deeds that she has done.”

Lahren added, “Can you imagine if we would sit here and attack Michelle Obama for something she was trying to do to better the country? We’d be attacked up and down. But because it’s Melania, because her last name is Trump, people like Ana Navarro think it’s OK—that they’re entitled to do that.”

Of course, some Twitter users found Lahren’s comments on “Fox and Friends” ridiculous in light of how frequently Michelle Obama was demonized at Fox News during Barack Obama’s presidency. MSNBC has had plenty of negative coverage of President Donald Trump, but Melania Trump hasn’t been criticized on MSNBC to nearly the degree that Michelle Obama was vilified at Fox News. Overall, CNN and MSNBC simply don’t pay a lot of attention to the first lady, who generally avoids the spotlight and has kept a low profile compared to first ladies of the past.

If anything, the media goes out of its way to give Melania Trump some type of coverage—for example, Politico noting that she attended a Ford Theater event honoring President Abraham Lincoln on June 10. Or CNN reporting, in May, that she had undergone a kidney operation for a benign condition.

In June, Agence France-Presse reported on the first lady’s “vanishing act” and her “unusual 25-day absence from public view” following her surgery. AFP asked Katherine Jellison, a history professor at Ohio University, to comment on the fact that Melania Trump keeps such a low profile compare to other first ladies—and Jellison responded, “I’m amazed Mrs. Trump has been able to do it…. For most of the 20th century and certainly in the 21st century, a first lady hasn’t had the option of not being a public figure.”

In 1988, when Ronald Reagan was president and Mikhail Gorbachev was leading the Soviet Union, the press focused heavily on the time that First Lady Nancy Reagan spent with the Soviet leader’s wife, Raisa Gorbachev. The meetings were quite symbolic, underscoring what the New York Times described as “warming trends in United States/Soviet relations.” In contrast, Melania Trump’s spokesperson, Stephanie Grisham, announced in early June that the first lady would not be attending either the G7 Summit in Quebec in June nor the U.S./North Korea summit in Singapore.

The term “low profile” was also used in connection with Melania Trump when, on January 31, CBS News reported that she would be attending the president’s State of the Union address. But she had canceled plans to attend the World Economic Forum in Davo, Switzerland.

President Trump is in the news 24 hours a day, seven days a week—whether it’s negative coverage at MSNBC or adulation and frequent praise at Fox News. But when it comes to First Lady Melania Trump, the spotlight has been the exception rather than the rule.