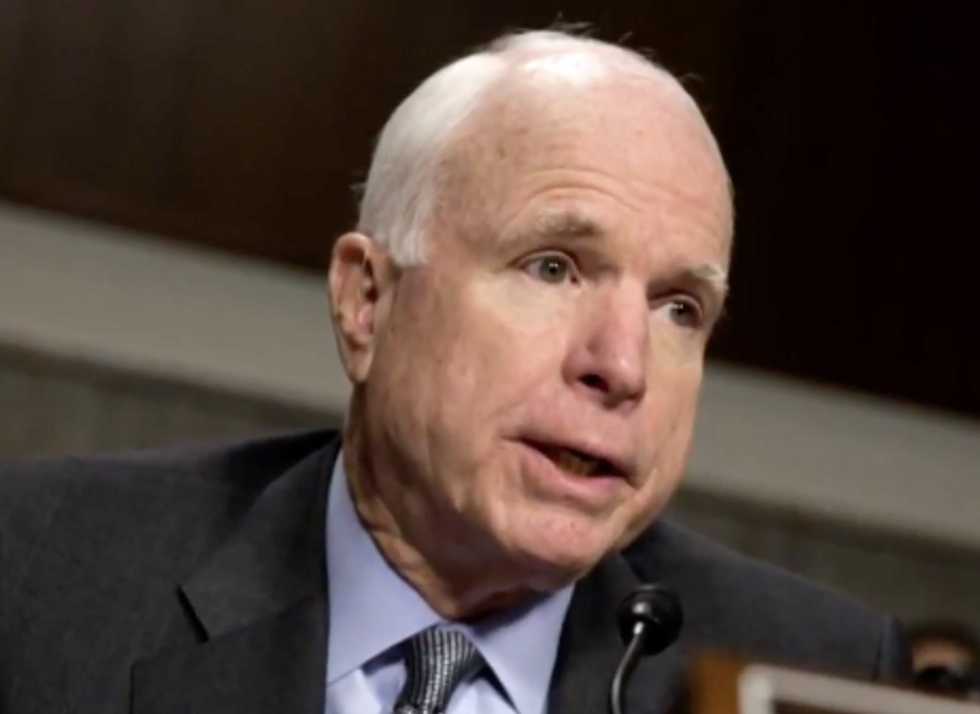 The late Senator John McCain took several thinly-veiled swipes at President Donald Trump, neo-Nazis, and white supremacists in a farewell message to the nation that has just been published. The message and its attacks were read on-air by the late Arizona Republican's close friend and former presidential campaign director, Rick Davis.

"Fellow Americans," McCain writes halfway into the statement, "I lived and died a proud American. We are citizens of the world's greatest republic. A nation of ideals, not blood and soil," he says.

"Blood and soil" is a racist and anti-Semitic Nazi slogan infamously and chillingly chanted by the neo-Nazis and white supremacists who marched last year in Charlottesville.

"We weaken our greatness when we confuse our patriotism with rivalries that have sewn resentment and hatred and violence in all the corners of the globe," McCain continues, in a shot at President Trump. "We weaken it when we hide behind walls rather than tear them down," he continues, again attacking the man who began his campaign attacking Mexicans as "rapists" and demanding Mexico pay for a border wall.

"Do not despair of our present difficulties, we believe always in the promise and greatness of America because nothing is inevitable here," he concluded. "Americans never quit, we never surrender, we never hide from history, we make history. Farewell fellow Americans. God bless you and god bless America."

Davis also told reporters that President Trump "will not be, as far as we know, attending" McCain's funeral" on Saturday at Arlington. "That's just a fact."

President Trump is also being chastised for refusing to issue a proclamation honoring Sen. McCain, and for ordering the White House flag back to full staff Monday morning. It was taken to half-staff Saturday night when McCain passed away.