McCain Was Never a Moderate: Here Are 8 Right-Wing Republicans Who Were Labeled ‘RINOs’ Because They Weren’t Insane Enough for the Far Right 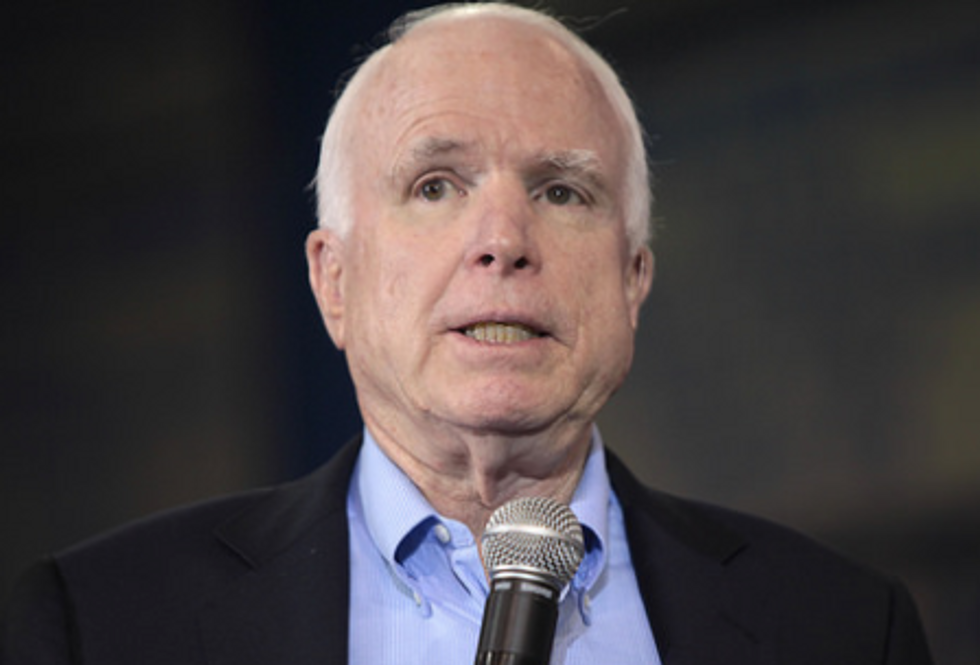 When the news came late last week that Sen. John McCain had discontinued his treatments for brain cancer and was near death, a long list of people in the political world—Democrats as well as Republicans—sent their condolences to the McCain family. But Fox News contributor Tomi Lahren, speaking at a rally for Arizona Senate candidate Kelli Ward, couldn’t be bothered with condolences. Instead, Lahren told the crowd of Ward supporters, “We can’t put up another RINO like McCain and (Sen. Jeff) Flake.” RINO, in the terminology of the far right, is short for “Republican In Name Only”—and as Lahren and others of her authoritarian ilk see it, McCain (who died on Saturday, August 25 at the age of 81) failed the far-right purity test. Ironically, Lahren herself was called a RINO for daring to say that the GOP should be more inclusive of pro-choice Republicans.

A self-described “Goldwater Republican,” McCain was never a liberal. But occasionally, the Arizona senator would cross party lines and vote with Democrats in the Senate—which is why he was considered a “maverick” within right-wing politics. But to the far right, “maverick” is synonymous with RINO (or to use one of the alt-right’s favorite insults, “cuckservative”). The fact that McCain inspired so much contempt from Lahren and AM talk radio host Rush Limbaugh speaks volumes about the far-right’s authoritarian mindset. And he was hardly the only right-wing Republican who was called a RINO for daring to have a mind of his own; many others on the right have been called RINOs as well.

Here are eight right-wing Republicans who were branded as RINOs for failing the far-right purity test.

After serving two terms as governor of swing state Pennsylvania, Tom Ridge joined President George W. Bush’s administration in early 2003 as director of the Department of Homeland Security. Ridge is conservative, but he has never been fond of the Christian Right and is pro-choice on the abortion issue—which is one of the reasons theocratic social conservatives hate him and consider him a RINO. In 2008, when McCain received the GOP presidential nomination, Ridge was at the top of his list for a potential running mate (Democratic Sen. Joe Lieberman was also considered). McCain thought highly of Ridge, but Richard A. Viguerie and other theocrats threatened that if Ridge or any other “pro-abortion vice presidential candidate” was on the ticket, he could forget about the Christian Right’s support—and ultimately, McCain was pressured into choosing the buffoonish Sarah Palin as his running mate.

The late Rev. Jerry Falwell, Sr., founder of the Moral Majority, complained bitterly because President George W. Bush included Tom Ridge, Lt. Gen. Colin Powell and two-term New Jersey Gov. Christine Todd Whitman in his administration; to Falwell, Bush was much too RINO-friendly—and because Whitman was pro-choice on the abortion issue, she couldn’t live down the RINO label. Whitman felt that the Christian Right had become much too influential in GOP politics and addressed that in her 2005 book “It’s My Party, Too: Taking Back the Republican Party... And Bringing the Country Together Again.” And these days, Whitman is persona non grata in most GOP circles because of her disdain for President Trump, who she denounced as unfit for the presidency in a July 22 commentary for the Los Angeles Times.

Unlike other Never Trump Republicans from 2015 and 2016 who caved into pressure and have become loyal, subservient Trumpistas, Ohio Gov. John Kasich has remained firm in his assertion that Trump is harmful to the GOP brand. And to Trumpistas and the Tea Party, Kasich’s refusal to support Trump—along with the fact that Ohio accepted Obamacare’s Medicaid expansion—makes him a RINO or “cuckservative.” Columnist Dana Milbank, in a 2015 commentary on Kasich, wrote, “In reality, Kasich’s views are reliably conservative. What’s hurting him, more likely, is his inclusive talk. Kasich preaches to fellow conservatives about doing right by racial minorities, immigrants, gay people, labor unions, the poor and drug addicts.”

The notion that Sen. Jeff Flake is a leftist is ludicrous; in 2014, the Arizona senator received a 95% rating from the American Conservative Union compared to, for example, only 6% for Sen. Elizabeth Warren and Sen. Bernie Sanders. Regardless, Lahren considers him a RINO for being an outspoken Trump critic. Conservapedia.com (a far-right website with a Wikipedia-like format) has devoted an entire page to Flake’s alleged RINO positions, which included being overly sympathetic to gays, abortion and immigrants.

When the late Arizona Sen. Barry Goldwater lost badly to Democrat Lyndon B. Johnson in the 1964 presidential election, he was considered an arch-conservative. Goldwater and William F. Buckley were often described as the essence of right-wing conservatism in those days, but when the Christian Right gained so much influence in the GOP under Ronald Reagan’s presidency, Goldwater became highly critical of the Rev. Falwell and similar theocrats—and even Mr. Conservative himself, Barry Goldwater, was labeled a RINO in the 1980s and 1990s.

The son of President George H.W. Bush (President Ronald Reagan’s vice president for eight years) and former First Lady Barbara Bush and the brother of President George W. Bush, former Florida Gov. Jeb Bush comes from a family that has been synonymous with right-wing politics for generations. But the alt-right has repeatedly denounced Jeb Bush as a RINO and a “cuckservative,” insisting that he’s soft on illegal immigration—and the fact that he is a fluent Spanish speaker who is married to a Mexican woman, Columba Bush, is deeply troubling to the alt-right, which sees him as a traitor to his race.

Year after year, Rush “OxyContin” Limbaugh painted McCain as someone who was more of an ally to Democrats than Republicans—which was nonsense. The Arizona senator voted with Republicans in the Senate much more than Democrats, but even the occasional vote with Democrats was deeply troubling to Limbaugh and other wingnuts. And that continued during the last few years of McCain’s life. McCain voted with Senate Majority Leader Mitch McConnell on the Tax Cuts and Jobs Act of 2017 and voted to confirm Trump nominee Neil Gorsuch to the U.S. Supreme Court—and it’s doubtful that he would have voted against Judge Brett Kavanaugh, Trump’s second High Court nominee. But when McCain voted against the American Health Care Act (one of Republicans’ proposed replacements for the Affordable Care Act of 2010, a.k.a. Obamacare) in 2017, the far right saw it as proof that he was a RINO and a “cuckservative” at heart.

Minnesota Gov. Tim Pawlenty favors overturning Roe v. Wade, opposes same-sex marriage, praises the Family Research Council and favors deep cuts to Social Security and Medicare. But that isn’t enough for the far-right: this year, Pawlenty lost to Jeff Johnson (a commissioner in Hennepin County, Minnesota) in a GOP gubernatorial primary—which the far-right sees as a victory over a RINO. Reflecting on the defeat, Pawlenty declared, “The Republican Party has shifted. It is the era of Trump, and I’m just not a Trump-like politician.”