GOP Candidate Defends Claim Wives Should Submit to Husbands: Jesus 'Didn't Consider it Wrong to Submit Himself to the Father' 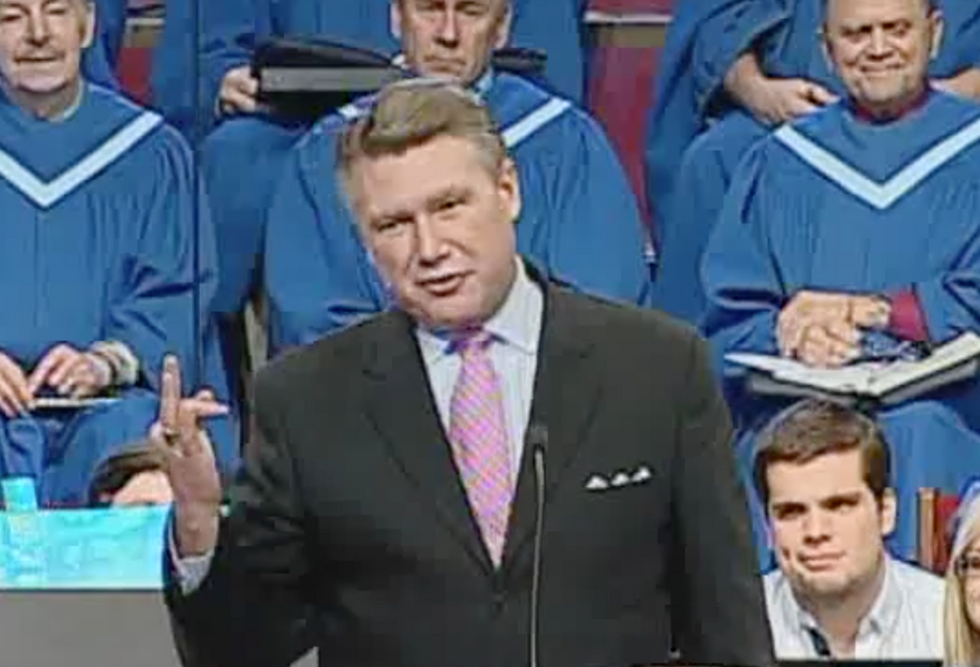 Mark Harris, a right-wing pastor and the Republican nominee for North Carolina's 9th Congressional District, has found himself in hot water for a series of misogynistic statements about women. But he has no intent of backing down or apologizing.

In July, American Bridge posted audio of a 2013 sermon he gave while a pastor at Charlotte's First Baptist Church, in which he questioned whether women who work outside the home are following "God's plan for Biblical womanhood," and criticized the cultural standard that women should value being "independent."

Subsequent reporting by Roll Call detailed another sermon in which Harris told women that "the Lord ordained" submission to their husbands.

Faced with criticism, Harris is not apologizing, instead trying to insist he was simply misunderstood. Speaking to Roll Call, he explained that women are still equal with men even if they "submit," and that by analogy, "[Jesus] didn't consider it wrong to submit himself to the Father."

Other pastors, however, do not agree. More than 40 women faith leaders issued a joint statement in July condemning Harris, saying his history of comments about women "cast serious doubt on his commitment" to equal rights. The Charlotte Observer editorial board, meanwhile, has raked him over the coals.

Harris, who defeated GOP Rep. Robert Pittenger in his own primary in May to become the nominee for North Carolina's 9th District, has a history of right-wing fundamentalist activism. He was a key figure who lobbied for the passage of HB2, North Carolina's infamous anti-trans "bathroom bill" which provoked widespread outrage and helped cost Republicans the governorship in 2016.

The Democratic nominee is Dan McCready, a Marine veteran and green energy investor running on a platform of reversing the Supreme Court's Citizens United decision, ending gerrymandering, and protecting and expanding access to health care. He has harshly criticized Harris' views on women.

"As a Christian, I believe that we are all created in God’s image," tweeted McCready last month. "That means men and women are equally valuable and equally capable. My opponent, Mark Harris, is out of step with this district and this century."

Though North Carolina's 9th District, in the southern part of the state, backed Trump by 11 points, conditions are ripe for a competitive race. One recent poll from the conservative Civitas Institute put McCready ahead of Harris by 7 points.

Harris' ongoing controversy over his view of women is unlikely to help him close that gap.

'Whining is how they win': ignoring Republicans may be the best way to beat them