Mad Dogs and Ideologues: Trump and His Racist Ilk Are Pushing Us Toward a Day of Reckoning for America's Fundamental Values 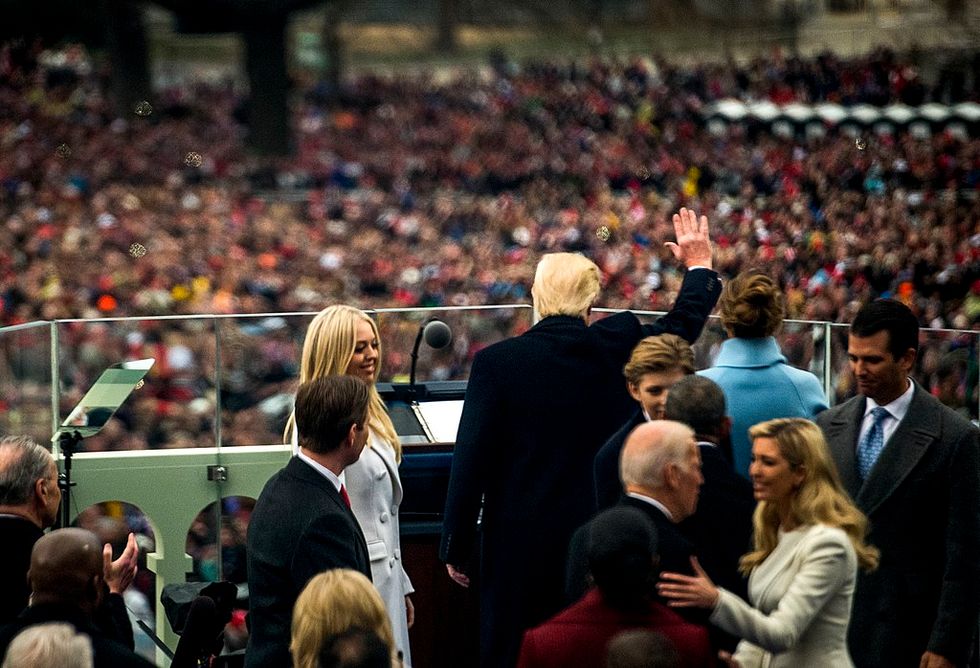 Early on Sunday morning, April 1, our Head Fool received a report from his most trusted intelligence source. "Small army of migrants marching toward the United States," headlined his favorite show, Fox & Friends. The commander-in-chief wasted no time in responding to this imminent threat, reflexively trumpeting to his loyalists that a caravan of some 1,500 marauding Latinx militants was coming to crash our southern gates. "Getting more dangerous," the chief shrieked in a tweet immediately following the right-wing TV report. "Caravans coming," he warned. "Republicans must go to Nuclear Option to pass tough laws NOW."

The image of an invading "army" became the perfect bugaboo to rally America's xenophobic right wing behind the extremist anti-immigrant measures that White House strategists, Attorney General Sessions and other political opportunists had been developing for weeks. Demagogic demonization of brown-skinned foreigners was key to ramming through their nasty scheme: to unilaterally decree every asylum seeker a criminal and seize their children as political hostages. Trump had long been pounding his nativist, racist theme that Mexicans (and Mexican-Americans) are rapists and drug dealers. In April he doubled down, insisting that immigrants pour across our southern border and "infest our country."

Thus, Trump used a caravan of humble Hondurans, wending their way north, to generate a fog of fear to rationalize his planned attack on migrant families. (In finest Trump fashion, he even monetized the political windfall, quickly sending a fundraising email for his re-election campaign that touted his heroic effort to "STOP the caravan.") The Hondurans, however, were not animals, invaders or infesters, but desperate families simply seeking refuge in the U.S. from life-threatening horrors at home.

Irony sometimes sneaks up on you, as it did on President Trump. June 20 was World Refugee Day, commemorated annually with events in more than 100 countries to raise awareness about the plight of people forced to flee oppression in their home countries. Trump probably didn't notice, for June 20 was also another day of heavy lifting in his team's furious determination to slam the door on families hoping for refuge. The irony is that their iron-fisted treatment of migrants generated much more awareness of refugee abuse than all the other global education efforts combined. More importantly, their vindictive family separation policy sparked a massive grassroots backlash here and around the world, finally forcing the administration to back off from some of the worst of its humanitarian abuses.

But they are mad dogs and ideologues, so they won't stop ... unless and until we stop them. Remember that while Trump & Co. are the perpetrators of this god-awful policy, they're doing it in our name, with our money. Remember, too, that the mass migration he's squawking about is largely composed of victims of societal breakdowns in Central America that trace directly back to the civil wars and military juntas that previous U.S. governments help instigate, arm and back. Yes, the relative freedoms and opportunities available in the U.S. do "pull" migrants across the Rio Grande, but the most powerful force behind today's influx from the South is the "push" of our country's repressive military policies and exploitative economic policies. Neither political party in Washington is addressing that push - which is the only "comprehensive immigration reform" that will actually work.

So this is not just a matter of Trump's character, but also of ours. Our government's immigration policies raise a fundamental question about our people's moral fortitude: Will we as a society stand up to our own xenophobic, demagogic government pressing us to abandon — no, to betray — America's historic democratic values?