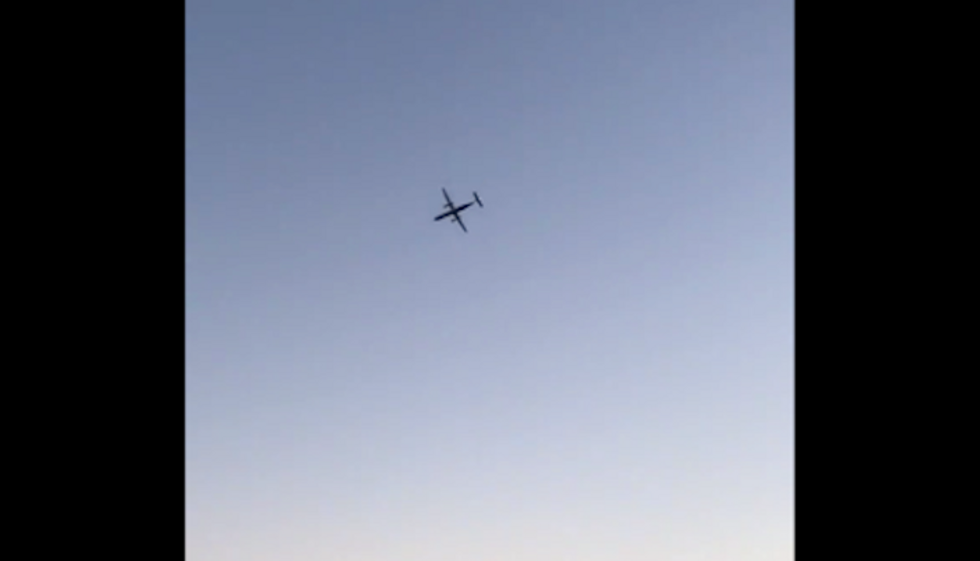 The official Twitter account of Alaska Airlines, which owns Horizon Air, confirmed the “unauthorized take-off” of a Horizon Air Q400. “We believe there are no passengers on board,” the airline wrote. According to the Associated Press, airport officials said the incident involved an airline employee.

We are aware of an incident involving an unauthorized take-off of a Horizon Air Q400. We believe there are no passe… https://t.co/uThTnUX24X
— Alaska Airlines (@Alaska Airlines)1533961001.0

Pierce County public information officer Ed Troyer wrote on Twitter the unidentified male “was doing stunts in air,” and that a “lack of flying skills caused crash into Island.”

Male is confirmed a suicidal male. Acted alone he is 29 year old Pierce county residence . We are working back ground on him now.
— Pierce Co Sheriff (@Pierce Co Sheriff)1533963275.0

Follow this thread for official info. This is not a terrorist incident. Confirmed info .. this is a single suicide… https://t.co/yaYysOKspn
— Pierce Co Sheriff (@Pierce Co Sheriff)1533963418.0

FBI is communicating w/local/state/federal partners, but it's too early for us to put out details on the evolving s… https://t.co/DJhQ4iQw19
— FBI Seattle (@FBI Seattle)1533964327.0

Jon Ostrower, editor-in-chief of The Air Current, posted audio of the call between the male and air control before the plane crashed.

Journalist Jimmy Thompson also pulled clips of the radio call between the hijacker and ground officials. Listen below:

I'm listening through the archive of the radio chatter on the #seatac hijacking. Below are some of the clips. https://t.co/ziBAYv7cgn
— Jimmy Thomson (@Jimmy Thomson)1533961232.0

Looks like that didn't upload correctly. Here is the clip of him asking for help getting the cabin pressurized so h… https://t.co/k5dbuE8BUy
— Jimmy Thomson (@Jimmy Thomson)1533963186.0

This clip appears to be just a fragment of a conversation that was stepped on by other traffic, but he is saying so… https://t.co/O1k7vhlb70
— Jimmy Thomson (@Jimmy Thomson)1533963374.0

Here, he asks for the coordinates of the mother orca that has been spotted in Puget Sound with her dead calf over t… https://t.co/KMN3Lmy71i
— Jimmy Thomson (@Jimmy Thomson)1533965392.0

Here he asks about the weather in the nearby Olympic mountains. Thanks to @petersterne for spotting this one. https://t.co/ccmZGpX1vy
— Jimmy Thomson (@Jimmy Thomson)1533965918.0

Here someone calling himself captain Bill tries to talk him into landing. #seatac Thanks @jackhauen for finding thi… https://t.co/IiL7nw7Ms1
— Jimmy Thomson (@Jimmy Thomson)1533966317.0