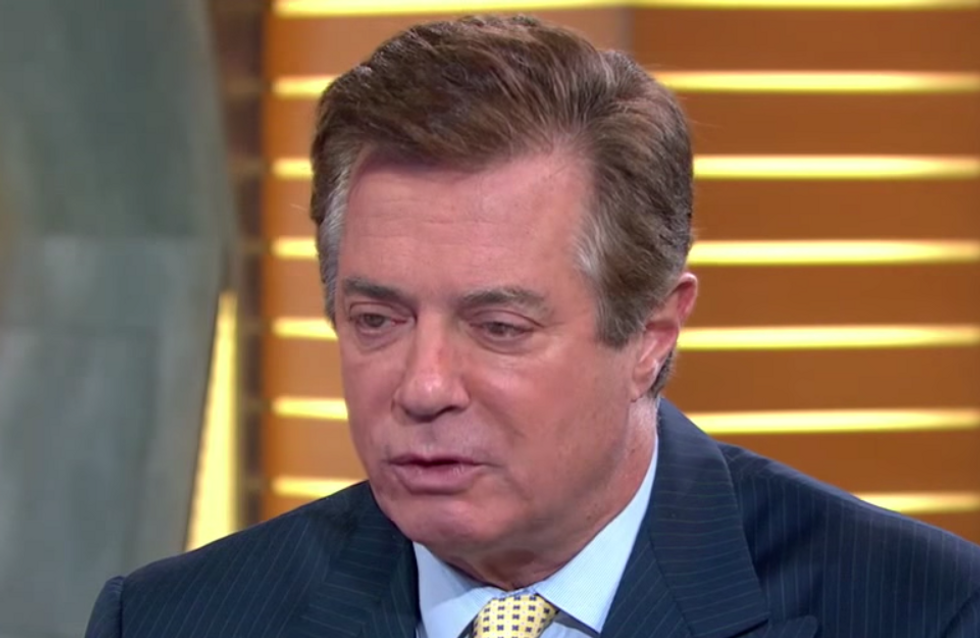 Even President Donald Trump's allies in Congress have warned him that pardoning Paul Manafort, his former campaign chairman who has been convicted of eight counts of bank and tax fraud, would be a "bridge too far."

But the president and his lawyers still have made it clear that they are willing to consider a pardon for Manafort — though they have said it will wait until after special counsel Robert Mueller's investigation wraps up.

In a new op-ed for the New York Times, to law professors Alex Whiting and Ryan Goodman argued Thursday that despite the fact that Trump hasn't yet tried to actually pardon Manafort, his involvement in the case against his former campaign chairman already constitutes obstruction of justice. President Richard Nixon, they note, was accused of similar behavior in the articles of impeachment adopted by the House of Representatives.

"Mr. Trump appears to be trying to have it all: dangling a pardon down the line to keep Mr. Manafort quiet, giving the president the benefits of a pardon without requiring him to pay substantial political costs," they wrote. "That requires assuring Mr. Manafort that a pardon will very likely come, and Mr. Giuliani has obliged, telling reporters that Mr. Trump himself raised the subject of a Manafort pardon."

They continue: "Whether and when he acts, it appears that Mr. Trump has already embarked on a strategy of using his pardon power to silence witnesses in the Mueller investigation. In other words, at this point, dangling the prospect of a pardon or going ahead and exercising it amounts to the same thing: obstruction of justice."

Trump could have avoided all of this, they argued, if he had just kept his mouth shut about pardons.

Citing the articles of impeachment against Nixon, they say that Trump has engaged in some of the conduct the former president — who ultimately resigned instead of being forcibly removed from office — carried out, specifically: “Endeavoring to cause prospective defendants, and individuals duly tried and convicted, to expect favored treatment and consideration in return for their silence or false testimony."

By suggesting that he might pardon Manafort, insisting that his former aide is fundamentally a good guy, denouncing the results of the trial, attacking the investigation that brought him to justice, and commending him for not "breaking" under the pressure, Trump is sending a message that a pardon awaits. That is, as long as Manafort doesn't become a witness against the president.

"These words should be seen for what they are: an effort to keep Mr. Manafort quiet and to impede the investigation by encouraging potential witnesses not to cooperate," the authors note. "In this way, the president’s words about the judicial process matter, have real consequences and should not be discounted or dismissed as mere angry rants."