Labor Day: 24 Hours When Workers Are Recognized as Human 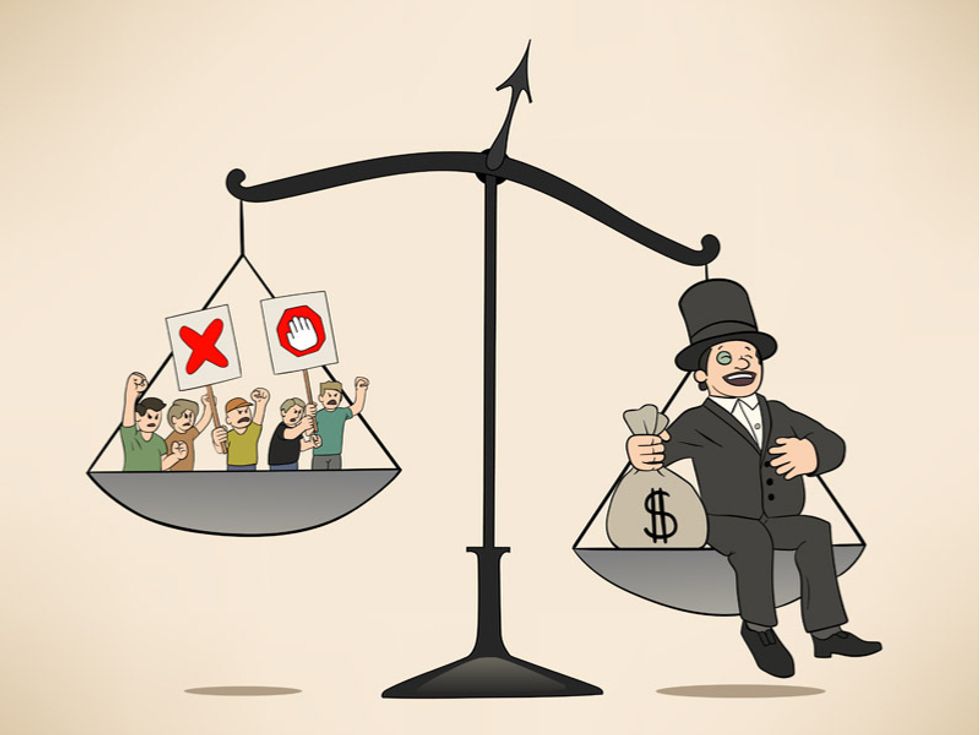 Labor Day recognizes the humanity of workers. It commemorates their year-long efforts with time off dedicated relaxation, family, friends, and barbecues.

There’s no holiday for robots, raw materials, or the energy that animates the machines of manufacturing. Because, of course, they’re not human.

Somehow, though, business schools and the corporate executives they spit out have lumped workers together with robots and raw materials as “inputs,” as if laborers aren’t human. That makes it easier for CEOs in ungodly profitable corporations to deny workers raises. U.S. CEOs and shareholders can seize for themselves all the gains produced by faceless inputs.

And that’s what they’ve done. Republicans gave corporations a massive tax break this year with the promise that executives would share those gains with workers, to the tune of $4,000 to $9,000 raises each. The U.S. Commerce Department reported last week that after-tax corporate profits rose 16.1 percent in the second quarter, the largest year-over-year rise in six years. But corporations didn’t use that money for raises. Instead they bought back record amounts of their own stock, boosting the market to all-time highs, making the rich richer, while workers’ wages actually declined when inflation was factored in. This has been going on for decades, with workers’ wages flat since 1973.

What this means to workers in the richest country in the world was illustrated in an Urban Institute survey released last week. It found that 23 percent of American households struggled to feed family members at some point last year. In a Fed survey released in May, a quarter of Americans said they didn’t think they were doing “at least OK” and more than a fifth said they were unable to pay their current month’s bills in full.

This is because CEOs and rich shareholders have stiffed the “inputs.” This system does not work for the vast majority, very much like the monarch system did not work for the vast majority of American colonists. Those pioneers declared their right to self-determination and created the United States. Self-determination within the U.S. corporate structure would go a long way toward restoring workers’ humanity and reinstating the days when pay rose in tandem with productivity.

Worker self-determination is more common in countries with lower income inequality. In other words, when workers have more of a say, the profits their hands and minds produce are better apportioned. Germany and Scandinavian countries like Finland and Norway are examples. But it’s also true next door in Canada. There, legislation provides more protections for unions, enlarging numbers and giving labor organizations more impact. Nearly 30 percent of Canadian workers belong to unions. In Denmark, Sweden and Finland, it’s more than 60 percent.

In the United States, it’s 10.7 percent, near the bottom among developed nations, despite a survey released last week that found 62 percent of Americans approve of unions. The difference between those two numbers shows how much U.S. legislation obstructs unionization.

Germany, one of the world’s most successful capitalist nations, and some other European countries have embraced a democratized corporate model in which workers are routinely and systematically engaged in governance through works councils and membership on corporate boards of directors. Germany has required since 1976 that workers elect half of the members of the boards of directors of corporations with more than 2,000 employees. In this model of corporate co-determination, workers are partners, not inputs.

Works councils are employee-elected boards that consult with management on workplace issues. German companies began establishing them in the late 1800s. The government mandated them for all medium and large companies during World War I. The Nazis, of course, shut them down, but corporations restored them after the war.

This system works well for German workers. They make about $10 an hour more than their U.S. counterparts. Government debt and income inequality both are lower there than in the United States. Manufacturing has thrived in Germany while it has waned in the United States. And German workers don’t have to worry about health insurance because they were the first to launch what would become universal health care. Life expectancy is longer in Germany.

As might be expected with corporate boards populated by workers, German CEOs are paid less than American CEOs, and German companies place less weight on short-term profits and more on worker concerns like job security.

If Congress required half of the boards of directors of large American companies to be elected by workers, it might spare those corporations some trouble. Wells Fargo is an example. The bank got itself in hot water in 2016 when it was revealed that for years Wells Fargo had opened millions of unauthorized accounts, and then, to make matters worse, the bank charged fees to its unsuspecting customers on some of them.

The bank fired 5,300 workers, including its CEO, paid a $185 million fine and suffered serious damage to its reputation. The dismissed front-line workers told of a toxic, high-sales-pressure culture in which bank managers set unrealistic quotas and then threatened to demote or fire workers if those targets weren’t met. The workers left the bank with nothing but bad feelings toward Wells Fargo. By contrast, the fired CEO, John Stumpf, who oversaw this fake accounts operation, left with a big fat cushion—more than $100 million.

Then in April, the Feds hit Wells Fargo with another big penalty. This one was $1 billion for improperly charging thousands of customers for auto insurance they didn’t need. The bank’s new CEO, hauling in $17.6 million a year, is promoting the same old bad behavior.

But the fine didn’t really burn Wells Fargo. The Republican tax break awarded the bank an extra $3.7 billion in cash. And, somehow, Wells found $24.5 billion this spring to spend on stock buybacks. Meanwhile, the bank says it will increase profits by cutting $4 billion in costs by 2020.

That’s probably bad news for Wells workers, some of whom already got the bum’s rush. The cash-fat bank announced earlier this month that it was kicking 638 mortgage workers to the curb.

The bank could choose to retain these trained and experienced workers through a rough period for mortgages. And it probably would do that if half of its board members were employees. But since workers don’t have a voice on the board, and since managers perceive them to be nothing but inputs, these workers are on their way out.

Also, if half the Wells board were workers, they’d have reported, condemned and stopped that high-pressure sales culture that led to fake accounts, unnecessary car insurance and a badly tarnished Wells name.

She sees workers as valuable human partners in corporate enterprises, not as inputs. For Congress members to pass this bill would be a far better way to honor workers on Labor Day than a speech and parade.