Jerry Falwell Jr. Warns 'Never Trumpers' Are 'In for a Rude Awakening' 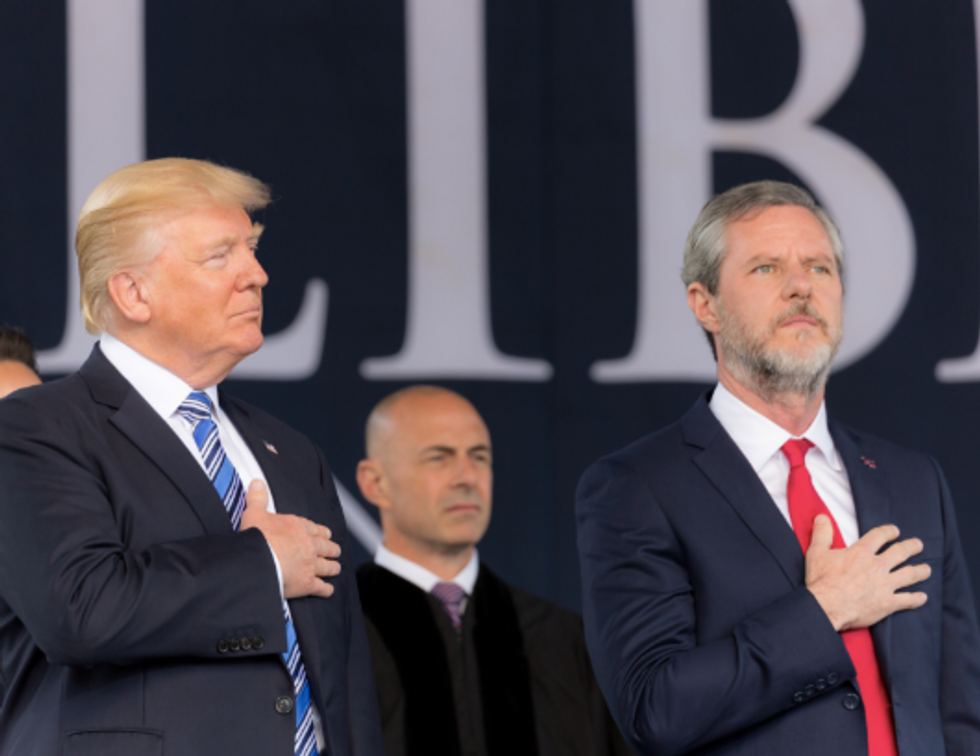 Liberty University president Jerry Falwell Jr. is now attacking critics of President Donald Trump by claiming Jesus "set the right example" by "associating" with sinners and not "shunning them."

@EricaGrieder @robertjeffress I’m glad Jesus was a friend of sinners. He set the right example by associating with them, not shunning them.
— Jerry Falwell (@Jerry Falwell)1534774015.0

@EricaGrieder @robertjeffress Because Jesus knew we are all sinners! A lot of Never Trumpers on the right seem to… https://t.co/ePVvnz34HB
— Jerry Falwell (@Jerry Falwell)1534774750.0

Falwell's comments are part of his long history of open support for the authoritarian president, which included violent anti-Muslim rhetoric.

His most notorious comments came in 2015 when he supported right-wing gun positions by telling his students that guns were needed to kill Muslims.

“I’ve always thought if more good people had concealed carry permits, then we could end those Muslims before they walked in,” Falwell said following the San Bernadino and Paris attacks.

Falwell formally endorsed Trump in 2016 and repeatedly praised the candidate throughout the campaign in counterfactual statements.

“In my opinion, Donald Trump lives a life of loving and helping others as Jesus taught in the great commandment,” Falwell said shortly before endorsing Trump.

In January of 2017, Falwell went so far as to positively compare Trump to a Roman dictator.

"Jesus said love our neighbors as ourselves but never told Caesar how to run Rome," Falwell wrote.

On Monday, Falwell finally turned his ire on right-wingers who refuse to bow to Trump.

"A lot of Never Trumpers on the right seem to think their sins are not as bad as other people’s," he said. "Boy, are they in for a rude awakening one day!"