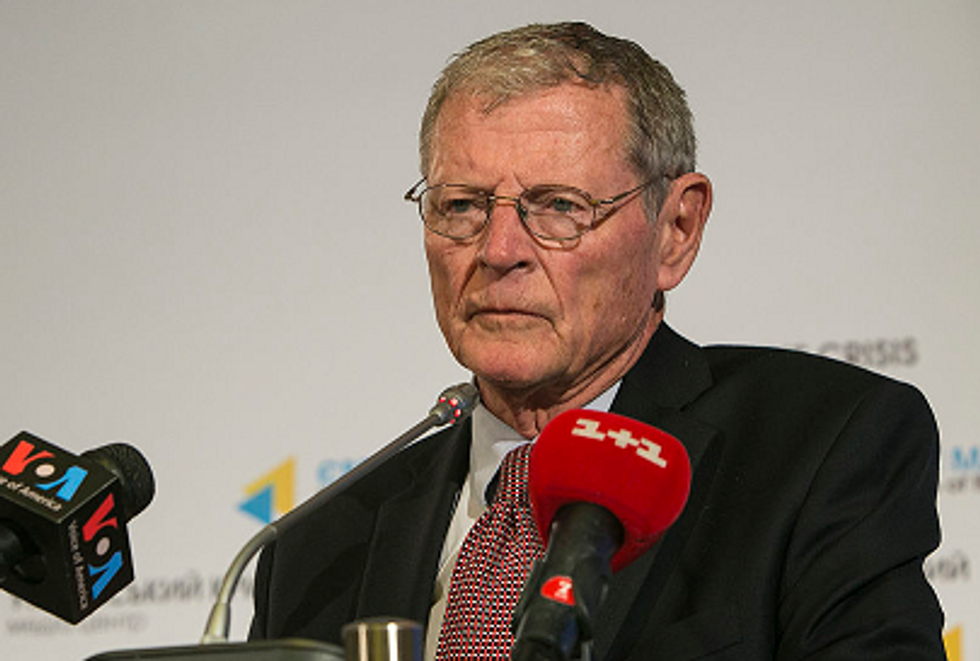 President Donald Trump caused outrage on Monday morning when he allowed the White House flag to be raised to full-mast, despite the fact that flags all over D.C. were still at half-mast in honor of the late Sen. John McCain (R-AZ), who succumbed to brain cancer on Saturday night. It was a move broadly seen as indefensible.

But incredibly, one of McCain's own colleagues, Sen. James Inhofe (R-OK), tried to defend it.

"Well, you know, frankly, I think that John McCain is partially to blame for that because he is very outspoken," said Inhofe to reporters on Monday afternoon. "He disagreed with the President in certain areas and wasn't too courteous about it."

This comment is utterly appalling. McCain has spent decades serving his country, both as a senator and as a prisoner of war in Vietnam. He is one of the few politicians in America who, for the sake of our basic institutions in an era when they have never been under greater assault, must command apolitical respect. For a sitting U.S. senator to claim that it is understandable for the President of the United States to disrespect McCain because of perceived disloyalty to the party and to the leader, or even partly McCain's own fault, is the antithesis of American values.

Making matters worse, Inhofe is broadly expected to take over from McCain as chairman of the Senate Armed Services Committee — putting a group of senators with a powerful check on Trump's Pentagon in the control of a man who has made clear he believes loyalty to Trump is more important than loyalty to uniform and country.

McCain and Trump have been at odds for years, with Trump even going so far as to claim that being captured in Vietnam didn't really make him a war hero.

While McCain was mostly deferential to Trump in the Senate, voting with the president 83% of the time, there were clear moments when the two clashed. McCain cast the deciding vote against sending the Senate's "skinny repeal" to conference, likely saving health care for millions of people, and was a frequent critic of Trump's dealings with Russia.

McCain did not invite Trump to his funeral, even while asking former presidents and bitter political rivals George W. Bush and Barack Obama to speak at the ceremony. And with his final statement to the American people, McCain took a swipe at Trump for his hatred of multiculturalism.