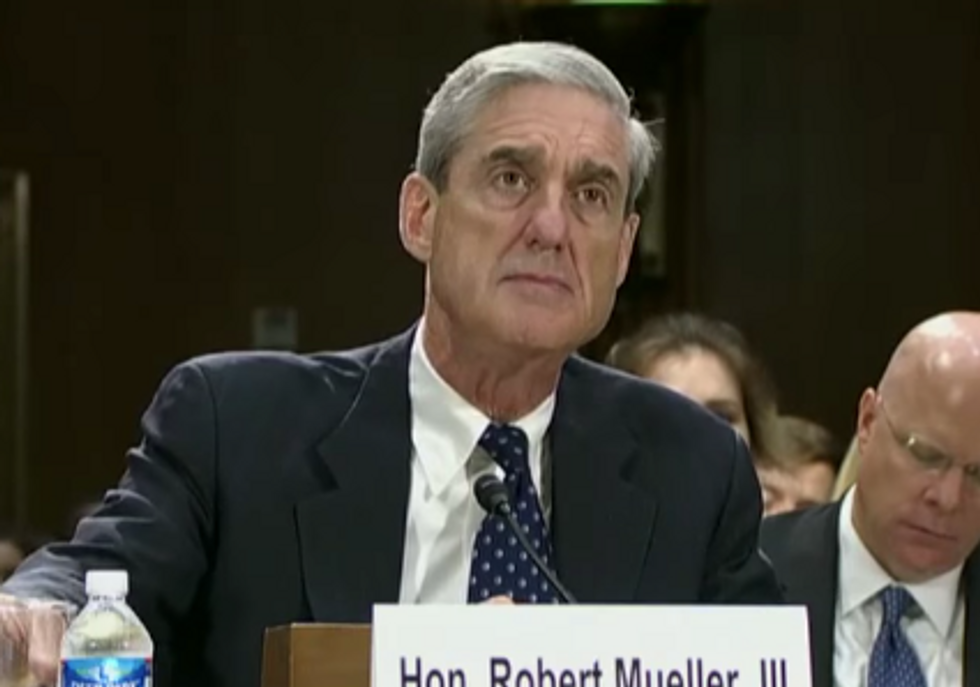 President Donald Trump's Justice Department may be able to bring him salvation from the Robert Mueller probe in an unexpected way.

Although the most immediate concern, of course, is that the Mueller probe will find damning material about Trump (read: proof that he broke the law), the fact that Republicans will have enough votes in the Senate to block Trump's removal from office regardless of the Mueller probe's conclusions does somewhat protect Trump from its potential findings. Then again, those same Republican senators could theoretically be pressured into removing Trump if the report's conclusions are so overwhelmingly unflattering that even Trump's supporters turn against him (an exceptionally unlikely scenario, to be sure, but not outright impossible).

That's where the new Justice Department position on an unrelated, decades-old murder case comes into play, as a new report from Politico explains:

The case at the appeals court was brought by attorney and author Stuart McKeever, who has spent decades investigating the disappearance of Jesus Galindez, a Columbia university professor and political activist who vanished in New York City in 1956. His body was never found, but there are indications that he was kidnapped and flown to the Dominican Republic, where he may have been killed.

The unsolved 62-year-old mystery, which also sweeps in the death of an American pilot and two trials in Washington of a man charged with being an unregistered Dominican Republic agent, is so colorful and convoluted that it inspired a 2003 film starring Harvey Keitel, “The Galindez File.”

McKeever, 82, wants a judge to release secret testimony given to a DC-based grand jury that investigated Galindez's disappearance. But the Justice Department argues that judges don’t have “inherent authority” to release such information unless it falls under exemptions approved by Congress, which don’t apply in the Galindez case — or in many others, including potentially Mueller’s investigation.

While it is unclear if the Justice Department is taking this position on the Galindez case as a pro forma act or because it realizes how it could help Trump, the underlying issue is unmistakable: If the Washington appeals court decides in September that judges can't release grand jury information which would normally be kept secret unless it falls under exemptions approved by Congress, any information acquired about Trump by the Mueller report could be legally kept under wraps.

"It is a sleeper case. If the D.C. Circuit were to accept the Department of Justice’s arguments…that would have potentially enormous implications for the future of the information from the Mueller investigation. That could close out a path by which that information becomes public," Harvard Law professor Alex Whiting told Politico.