Here's What We Can Learn from John McCain's Civic Vulnerability 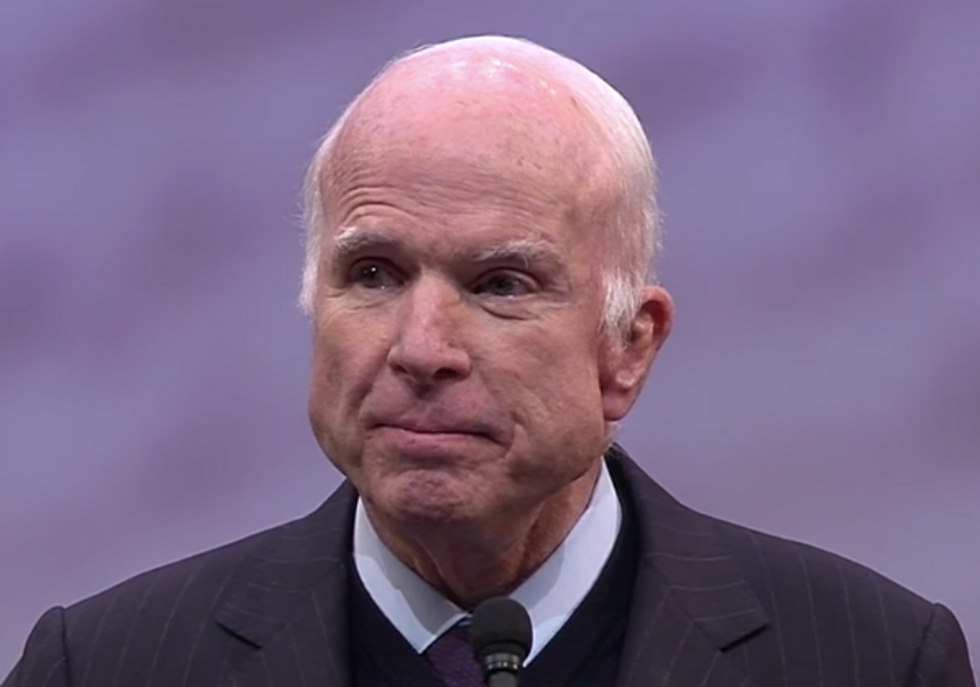 In the countless reflections on the life of U.S. Sen. John McCain, his interventions to shut down ignorant and racist comments about his adversary Barack Obama during the 2008 presidential election campaign have featured prominently.

McCain didn’t just stop the interventions. He forcefully challenged them and spoke up for the character and integrity of Obama. My opponent is “a decent person, and a person that you do not have to be scared of as President of the United States,” McCain told his own supporters who expressed concerns about the man who would eventually become American’s first Black president.

In that moment, McCain exercised civic vulnerability — potentially weakening his own strategic position in the service of the common good.

McCain’s actions are getting so much attention because they are not very common. Civic rage, rather than civic vulnerability, seems to be the order of the day.

Virtually everyone involved in public life is subjected to vitriolic rhetoric — with particularly heinous, sexually laden comments reserved for women who dare venture into the public square.

As the British newspaper The Telegraph put it following the murder of politician Jo Cox, killed as she campaigned for the U.K. to remain in the European Union, “death threats and sexual torment have become part of the job for our MPs.”

U.S. President Donald Trump actively feeds this civic rage with his Twitter feed and speeches at campaign rallies, which regularly feature degrading comments about not only opponents’ policy positions but also their looks and intelligence. He ferociously eschews any semblance of vulnerability, proclaiming on Twitter it’s his “way of life.”

And Trump’s style seems to be winning the day. A recent CNN headline lamented the fact that “Trump’s brand of politics has eclipsed McCain’s.”

But it need not be so. John McCain was not the first person to use civic vulnerability in the public square and he won’t be the last.

All human beings experience what’s known as contextual vulnerability. We find ourselves in positions when circumstances make us relatively weak and we feel, or are, threatened. The large bully with an aggressive entourage who pushed us around in elementary school; shifting economic conditions that threaten our job or retirement savings; systemic power imbalances that subject large groups of people to persecution and discrimination: these are all examples of contextual vulnerability.

Civic vulnerability, on the other hand, is something we choose to take up in the service of the common good.

It is hard to imagine anyone operating from a more secure position of strength than a contender for president of the United States.

In the fall of 2008, John McCain was at the top of his game. He had a long and storied career both as a military officer and senator. He had been chosen by his party to lead them into the election and he was supported by a loving family and a talented and committed team of advisers and campaign workers.

McCain had a reputation as an experienced and tough political infighter. Yet, in the moment — at least two moments, in fact — he stepped back from aggressive campaigning to assure supporters and all Americans listening that his opponent was “a decent family man (and) citizen that I just happen to have disagreements with on fundamental issues, and that’s what the campaign’s all about.”

Another example of civic vulnerability from a position of strength is when a powerful majority voluntarily cedes aspects of its power and control in order to build trust with, and promote justice for, a vulnerable minority.

In 1969, for example, my home province of New Brunswick passed its first Official Languages Act, making it the only officially bilingual province in Canada. That status was later solidified when New Brunswick’s bilingual status was entrenched in the Canadian Constitution Act of 1982.

In making that move, the province’s substantial Anglophone majority (two thirds of the population) ceded some power and influence to the Francophone minority. Historically schools and other public institutions in New Brunswick were aggressively English. It wasn’t until after the Second World War that French became an official language for the purpose of schooling.

This highlights the civic value of the move to constitutionally protect the French language: it both fostered trust between linguistic communities and brought a measure of justice for a beleaguered minority.

Virtually all efforts to enshrine minority rights in law or constitutions are exercises in civic vulnerability where those in power surrender some of their control in the service of others.

It is also possible to exercise civic vulnerability from a position of relative weakness. This was the approach of both Mahatma Gandhi in India and much of the civil rights movement in the U.S., including Martin Luther King’s Southern Christian Leadership Conference and the Student Nonviolent Coordinating Committee.

To march on the heavily guarded Dharasana Salt Works with no weapons or shields, to sit at “whites only” lunch counters in Nashville and endure verbal and physical abuse, or to march across the Edmund Pettus Bridge in Selma, Ala., into the waiting phalanx of state troopers were moments when people experiencing contextual vulnerability and subjugation took on even more vulnerability.

These acts of vulnerability were meant to galvanize support from others by demonstrating the unfairness of certain laws and the institutions and individuals who supported them. More importantly, they were designed to win over the very individuals and institutions that perpetrated the oppression.

Gandhi and King believed that the oppressor and the oppressed were both trapped by policies of subjugation and that a commitment to justice would liberate both sides. Victory for them was peace and justice for all, not simply to switch the equation of domination.

As Naim Stifan Ateek, a Palestinian and contemporary practitioner of non-violent resistance in the tradition of Gandhi and King, puts it: “It is of paramount importance that we maintain the principles of human morality and decency in relating to our adversaries.”

In defending Barack Obama’s right and fitness to be president, John McCain maintained the principle of human morality and decency in relating to his adversary. In doing so he set an example of another way to do politics.

It is an approach with a long and important pedigree, a pedigree that deserves much more attention in history and civics classes and contemporary civic engagement.