Here's How the Hallucinogen Ayahuasca Taught Me a Valuable, Old-School Republican Lesson 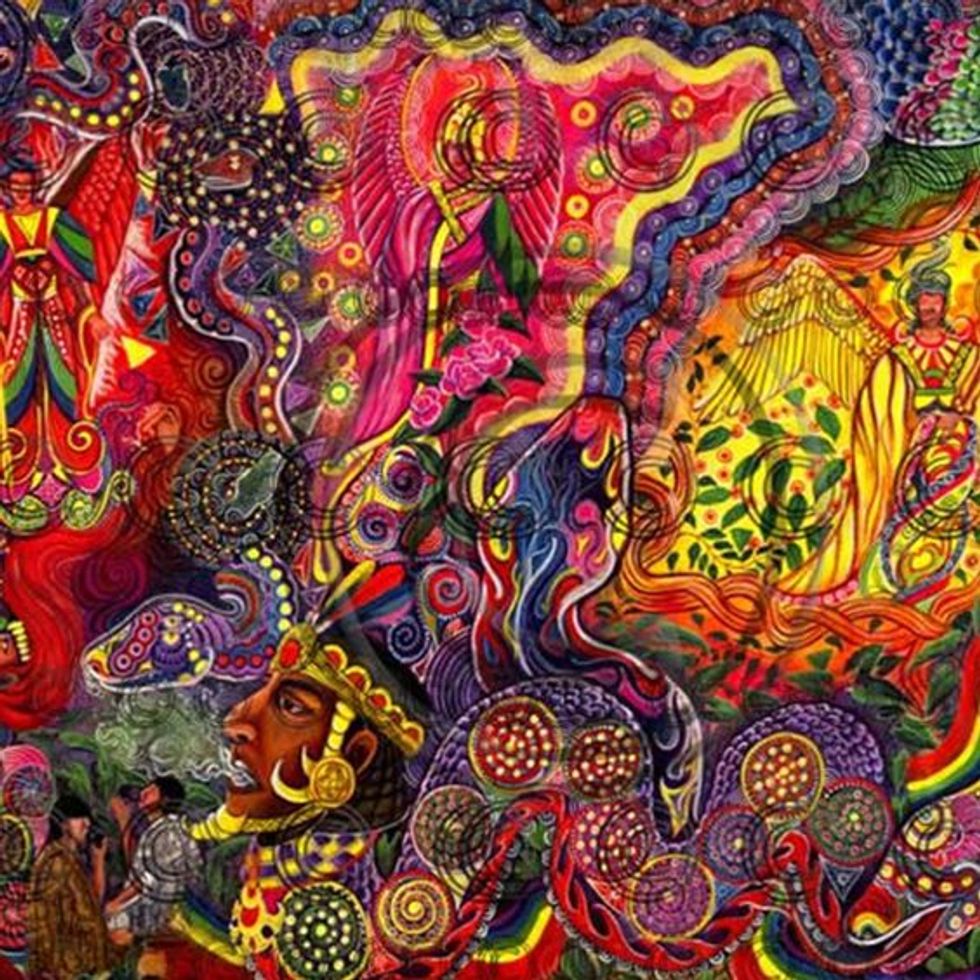 Ayahuasca, a Peruvian hallucinogen, is on people’s minds these days, in part with Michael Pollan’s best-selling book How to Change Your Mind.1 I’d been meaning to try it and my opportunity came up recently.

I was told to bring to the ritual ceremony a question to ask the “medicine.” Most people bring personal questions but since my life is feeling about as good as can be these days, I didn’t have one.

So instead I brought one related to my work as a psycho-proctologist, probing the nature of total jerk behavior and how to undermine it—in other words, how do you undermine people who will stop at nothing to undermine anyone who disagrees with them?

Such people can show up for any cause or no cause at all, since the cause is just window dressing. I had read Pollan’s book and did not find credible his subtle implication that the medicine exposes us to some absolute truth that it knows, a truth that he suggested was that we can and should become somehow egoless as though ego just gets in the way. I trust that that’s what he took away from his experiences. Half my time goes into work on the origin and nature of living beings, so the idea that one can become selfless doesn’t fly with me. We become selfless at death. In the meantime, even under the influence of the medicine, we are still here.

When I mentioned my critique of Pollan to a friend, she thought I was overly dismissive and began to talk as though she hoped I’d learn my lesson from the medicine. That annoyed me, too.

The ceremony I attended did not imply an ego-liberating message from the medicine or for that matter, any message. It was agnostic about what you might glean from the medicine. I liked that right away.

It’s ceremonial at the beginning and end but otherwise a private affair, each participant sitting or lying in the dark entirely independent from all others, no talking, no making sounds to the extent possible. During the heart of the ceremony, under the influence of the medicine a select few sing in a native Peruvian language – again no message for English speakers. Toward the end, while the medicine is wearing off, the songs can be in English but their message is quite generic. I sang two songs—"Sweet Thing" by Van Morrison and "Bold as Love" by Jimi Hendrix—both appropriately broad and open to personal interpretation.

There were a lot of warnings in advance about the effects of the medicine, nausea, and vomiting being the most notorious, bad trips as well. A small fraction of people had nausea. None had a bad experience. As for nausea, I had none. The medicine went down and stayed down smoothly. The effects came on strong and lasted about five and a half hours. For me, they were delightful and insight-provoking with respect to my question.

I loved the set and setting, the ceremony itself. It seemed about ideal for a church. There’s a ceremony leader but it’s not about them, no risk of a cult of personality or dogma. It’s about the medicine. Most churches have a leader who tries with words and ideas to evoke strong uplift on demand. I’ve never found that very compelling though of course many do. I find it dangerous to mix uplift with some grand vision absolute truth or sacred text, and anyway the uplift I’ve felt in most churches isn’t that uplifting.

I once got a ride from a church-going teen in New Orleans who told me he liked church as a place for him to wonder on his own about the big picture. His experience wasn’t total alignment with the sermons, it was a chance for him to reflect, the sermon prompting his independent thought. The medicine meeting was like that only more so, the music prompting whatever is on your mind. Your mind, not the mind of some spiritual authority.

It would be hard to imagine ingesting the medicine without having some response – you can’t avoid the uplift or shift it evokes once ingested – and each of our response would be different depending on what’s up in our lives, what answers we’ve found and what next questions we have.

The most obvious effect was synesthesia. The incomprehensible words sung in a foreign language evoked in me brilliant light shows as we lay there alone together in total darkness.

It was amusing how being alone together was still togetherness. A few singers sang off key and one could hear nausea coming up for people in the room, evocative of an idea in social psychology2 that there’s a link between disgust and violation of our aesthetic and moral standards. The sound of nausea provoked further nausea in others, a ripple effect much like the contagiousness of yawns or laughter. We are all connected by the ears. Luckily the atonal singing stopped before we fell into puke pandemonium.

I found myself thinking a lot about my question in the context of the setting itself, me in this room with a bunch of other people each having their own trip. Here’s some of what I took away from my experience and no, I would not argue that this is some absolute truth that the medicine teaches us. The medicine did not “teach” me about the dispensability of ego. It’s about safe and sane social ego management.

So far ayahuasca has taught me a republican lesson (The Grand Old Party, not it’s opposite, the TMP cult): To the extent possible, don’t harsh people’s trip. Life is hard enough as it is.

We each get our one trip. Whether there are others is not ours to say for certain, though we’re all welcome to believe whatever about other trips, afterlives, reincarnation, whatever.

What we know is that everyone here is here sailing through a notch of time, tasting and sampling their stretch of reality, representing it in our human form and our ideas, trying out things that could work for us and others, sharing ideas but from our perspective, without any authority.

Like the Grand Old Party used to emphasize, to each their own. We are against tyranny of all kinds. Do your thing. Go with your flow. To the extent possible don’t tread on me or anyone, in this our respective one known chance to ride out lives dealing with what we’re dealt.

Don’t harsh people’s trip. Let em be. Life is hard enough as it is, without people harshing it. For all of us but especially those of us born poor, handicapped or destined to a short diseased life. As the poet Philip Larkin says, “An only life can take so long to climb clear of its wrong beginning and may never.”

And a social democrat idea: Since life is hard, help out. Minimize the harsh trip for the ones struggling most. Use what abundance we luck into to help the least among us, also a Judeo-Christian and Islamic idea.

People’s trips will be different. Different strokes for different folks. We’re all visiting the different options to the extent we can. Wherever people are, you’ve probably been there too. After all, you are human like us all. As John Lennon said, “nothing you can do that can’t be done.”

Totally fine to have your firm faith in whatever. As Jimi Hendrix said, "Let your freak flag fly.”

Remember, only eyes can be shut. Other senses less so. Flapping in the breeze aside, freak flags flying are a sight thing. People can avert their glances if they want. Sight is more elective than the other senses. As Peter Tosh said, “Live clean, let your works be seen.” There’s something to seen and not heard. Since selective hearing is harder, use selective talking. Show respect to people by humoring them whenever possible. Yours is not to police the world. To the extent possible, stay in your lane and let others enjoy theirs.

To the extent possible because somehow we have to enforce a policy of each of us staying in our respective lane. Each of us can try to defend our lane against invasion but that’s tricky. Before WWII, the Germans were building what they claimed was a strictly defensive militia. There’s no such thing. A defense can easily become an offense as it did with the Germans, or when you protect your home with a gun that ends up used for homicides.

Any defense against trip-harshing can become an offense. “Weaponizing” is simply what we call a defense becoming offensive, a no trespassing sign becoming a trespass.

What’s absolutely right is not ours to say but to be thought and shared for anyone who’s listening. It doesn’t matter that the thought was ours or they didn’t listen. Happiness is having work for which you have infinite patience, but work that doesn’t unduly harsh other people’s trip. Whatever floats and even gloats your boat but not at the expense of sinking others.

The closest we’ve got to absolutely right is, to the extent possible don’t harsh other people’s trip now and into the future. We each find evolving meanings in our lives. The overarching meaning of life? To not end it.

There was more – lots more, but that’s the heart of it. Perhaps in letting this freak flag fly we can find common ground between Republicans and Democrats in patriotic defense against any cult that will stop at nothing to trump anyone who disagrees with it.