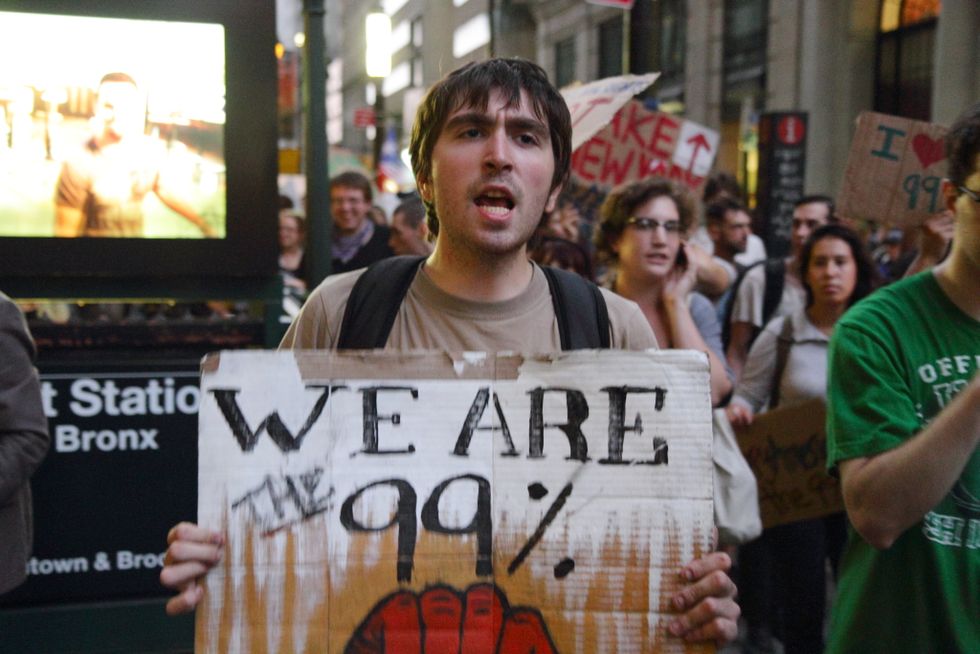 America's political history has been written in the fierce narrative of war -- not only our country's many military clashes with foreign nations, but also our own unending war for democracy in the U.S.

Generation after generation of moneyed elites have persisted in trying to take wealth and power from the workaday majority and concentrate both of those things in their wealthy hands to establish a de facto American aristocracy. Every time, the people have rebelled in organized mass struggles against the monopolist and financial royalists -- literally battling for a little more economic fairness, social justice, and equal opportunity. And now, the time of rebellion is upon us again, for We the People are suddenly in the grip of a brutish level of monopolistic power.

Corporate concentration of markets, profits, workplace decision-making, political influence and our nation's total wealth is surpassing that of the infamous era of robber barons. Apple, which just became the first U.S. corporation to reach a stock value of a trillion dollars, is now larger than Bank of America, Boeing, Disney, Ford, Volkswagon and 20 other brand-name giants combined. Just five tech superpowers -- Apple, Amazon, Facebook, Google and Netflix -- have raked in half of this year's stock price gains by the 500 top corporations ranked by the S&P index. A recent gold rush of corporate mergers has created mega-firms and shriveled competition in most industries, including airlines, banks, drug companies, food, hospitals, hotels, law firms, media, oil and more.

The results of fewer and bigger corporations is that those few attain overwhelming power over the rest of us. They are able to control workers' pay, crush unions, jack up prices, squeeze our smaller businesses, dominate elections, weaken environmental projections... and become even fewer, bigger and more powerful. Thus, they are waging all-out corporate class war on American people, and on our democratic ideals, and they're winning.

These monopolies are not merely un-American, they're virulently anti-American, suppressing our fundamental values of fairness and opportunity for all. That's why, throughout our history, the people have instinctively rebelled at the arrogant assertions of monopoly avarice -- the Boston Tea Party, the Populist Movement, the rise of unions, Teddy Roosevelt's trustbusters, the Progressive Party, the muckrakers, the New Deal, Ralph Nader and on and on. Yet, in the stunningly short period of the last couple of decades, corporate political money and the public officials it bought have enshrined monopoly power as a legitimate form of business in our land, aggressively protected from public "meddling" by lawmakers, regulators and judges. For example, after our grassroots economy was crushed in 2007 by the greed of too-big-to-fail Wall Street banksters, officials bailed out the villainous banks at the taxpayer expense and deliberately made them bigger, more powerful and more dangerous than ever. Today, just five banks control nearly half of all financial assets in the U.S.

You'd think such a massive power grab by bank monopolists would produce an equally massive, 24/7 barrage of coverage by the nation's multitude of media outlets, which purport to be our defenders of democracy. And sure, an occasional story pops out here or there about monopoly abuse, but nothing comprehensive and cohesive to rally a public rebellion against what's become the United States of Monopoly Rule.

Why? Look at who owns America's mass media. Three decades ago, 50 large media conglomerates controlled 90 percent of the media. This year, after yet another merger of giants is completed, just 5 mega-media monopolists will control 90 percent of what we see, hear and read. It is not in their interest to inform the public about the threat that monopolies pose to our democracy.

As a paragon of journalistic integrity, A.S. Liebling, warned nearly 40 years ago, "Freedom of the press is guaranteed only to those who own one."