Here's a Brief History of Trump's Blatant Lies About His Affairs 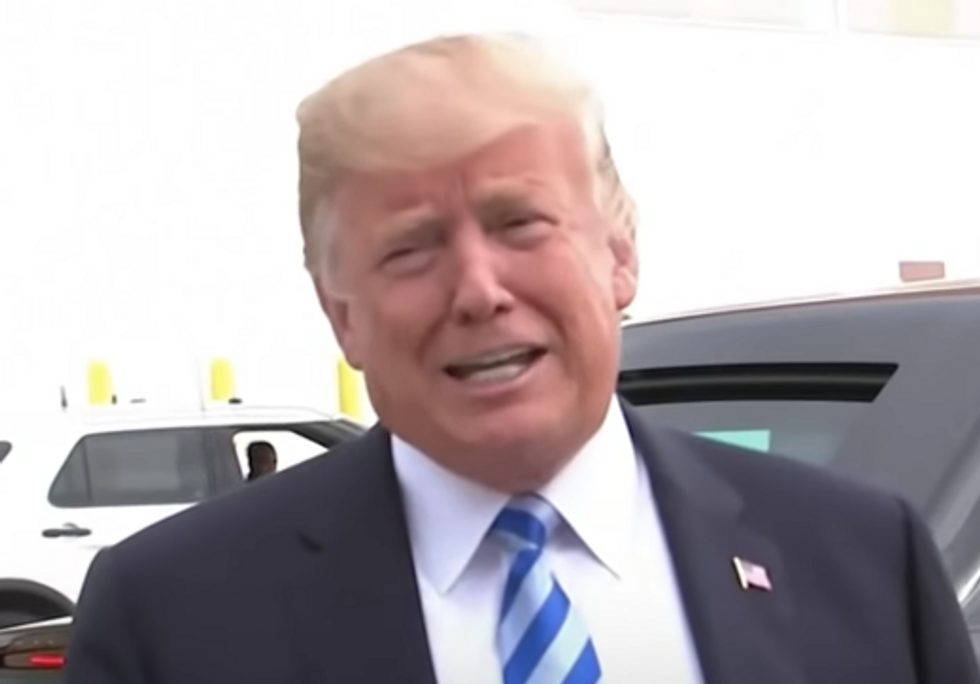 A big part of the reason is Donald Trump not only paid her off … he denied it. Trump’s inability to be truthful even when his infidelity was caught and splashed across the headlines complete with the details of the nondisclosure agreement that Daniels was asked to sign as part of her deal, ensured that there was always something to make the story surface again, and again, and again. Daniels’s attorney, Michael Avenatti, emerged as a force equal to Trump when it came to needling, pushing, and keeping a story in the public light. And Daniels herself was willing to appear regularly in the early days of the story, helping keep it visible.

Trump continued to claim that he not only had not engaged in a sexual liaison with Daniels—in which the pair bonded over the terrors of “Shark week” and Daniels’s application of a rolled magazine to Trump’s posterior—but more importantly Trump denied that he knew about the payment made to Daniels. For some time, he was joined in this deception by Michael Cohen. On February 13, Cohen claimed that he paid the $130,000 to Daniels out of his own pocket as a “private transaction” and “Neither the Trump Organization nor the Trump campaign was a party to the transaction with Ms. Clifford, and neither reimbursed me for the payment, either directly or indirectly.” Cohen repeated the claim several times in the following weeks.

Sanders:  Yeah, I’ve had conversations with the President about this. And, as I outlined earlier, that this case has already been won in arbitration and that there was no knowledge of any payments from the President, and he’s denied all of these allegations.

And a month later, Trump repeated this claim himself — on Air Force One.

On April 5, Trump spoke with reporters aboard Air Force One.

Reporter: Mr. President, did you know about the $130,000 payment to Stormy Daniels?

Reporter: Then why did Michael Cohen make those if there was no truth to her allegations?

Reporter: Do you know where he got the money to make that payment?

Trump was a bit more moderate in an appearance on Fox & Friends on April 26. He still laid claim to Cohen, admitted that he knew about the Daniels case, but was a bit fuzzier on the source of the payoff.

Trump: Michael represents me, like with this crazy Stormy Daniels deal, he represented me. And from what I’ve seen, he did absolutely nothing wrong. There were no campaign funds going into this.

But only a week later, on May 2, Trump’s new attorney Rudy Giuliani took a howitzer to Trump’s claims.

Giuliani: Some time after the campaign is over, they set up a reimbursement, $35,000 a month, out of his personal family account

Mr. Cohen, an attorney, received a monthly retainer, not from the campaign and having nothing to do with the campaign, from which he entered into, through reimbursement, a private contract between two parties, known as a non-disclosure agreement, or NDA. These agreements are.....

This jumbled attempt at legalese became the new line. Trump’s position had been shaved back from not knowing anything about it, to not paying back Cohen, to not paying Cohen out of campaign funds. Trump grumbled about Rudy not knowing what he was talking about over the next few days, but the basic facts that Cohen paid off Daniels and Trump paid back Cohen were no longer in question.

But the claim that Trump knew nothing and paid nothing was crumbling from the beginning. On May 4, a New York Times article pointed to Allen Weisselberg, the chief financial officer of the Trump Organization, as someone who had been aware of the financial arrangement for paying back Cohen for his Daniels outlay from the beginning.

Giuliani continued to act in the role of chief Band-Aid ripper-offer and generator of offense over the next month, regularly appearing to both make outrageous statements about Daniels and reveal more tidbits about Trump. As when he showed up on June 7 to claim that Trump’s lies and statements couldn’t damage Daniels because "I mean, she has no reputation. If you're going to sell your body for money, you just don't have a reputation."

Much of July was spent with Giuliani more directly confronting the Mueller investigation, as Trump and his legal team created increasingly ludicrous requirements for any potential interview. But as the month came to a close, attention abruptly swung back to the Daniels case as Michael Cohen revealed that he had tapes of his conversations with Trump. On July 25, CNN was handed a copy of the first Cohen tape to become public. In it, Trump can be heard discussing not the Daniels case, but the case of Playboy model Karen McDougal who engaged in a more extended affair with Trump.

McDougal was told that her story was going to be publicized by the tabloid National Enquirer. Instead, the Enquirer’s owner and publisher was actually signing the model to a nondisclosure agreement disguised as “an exclusive contract.” And the deception was multiple layers deep, as it wasn’t really the Enquirer paying McDougal. Because Cohen was paying the Enquirer, and Trump was paying Cohen. It was a payment that Donald Trump clearly recognized as shady.

Cohen: I spoke to Allen about it, when it comes time for the financing, which will be...

Trump: Wait a sec, what financing?

Cohen: Well, I’ll have to pay him something.

Trump’s claims that he knew nothing about these payments, or about either Daniels or McDougal, were revealed as not just lies, but deliberate attempts to cover up criminal deception.

Avenatti returned to the fray that same day, claiming that even the massive heap of corruption already exposed was only the opening salvo.

Breaking: Donald Trump conspired with Michael Cohen to pay off multiple other women prior to Election Day in 2016. They were also concerned about a pregnancy. Cohen has evidence and info in his possession and it must be released to the public. Now! #Basta

Cohen: I participated in this conduct, which on my part took place in Manhattan, for the principal purpose of influencing the election.

Trump was officially an unindicted co-conspirator … and remains unindicted only because of DOJ rules against indicting a sitting executive.

Now Michael Avenatti is claiming that there’s more to come in terms of Trump’s payoffs, and Michael Cohen is saying that he’s ready to talk about Russian conspiracy. And Giuliani is at Trump’s golf course in Scotland saying that he thinks all this means that the special counsel investigation has to be almost over.

Giuliani: [Mueller] might be at the end now. He has to be winding down. What else is there? Near the end.

But Giuliani is no more right about this than he has been about anything else. Unless he’s ready to broker Trump’s resignation deal, this is only the beginning.