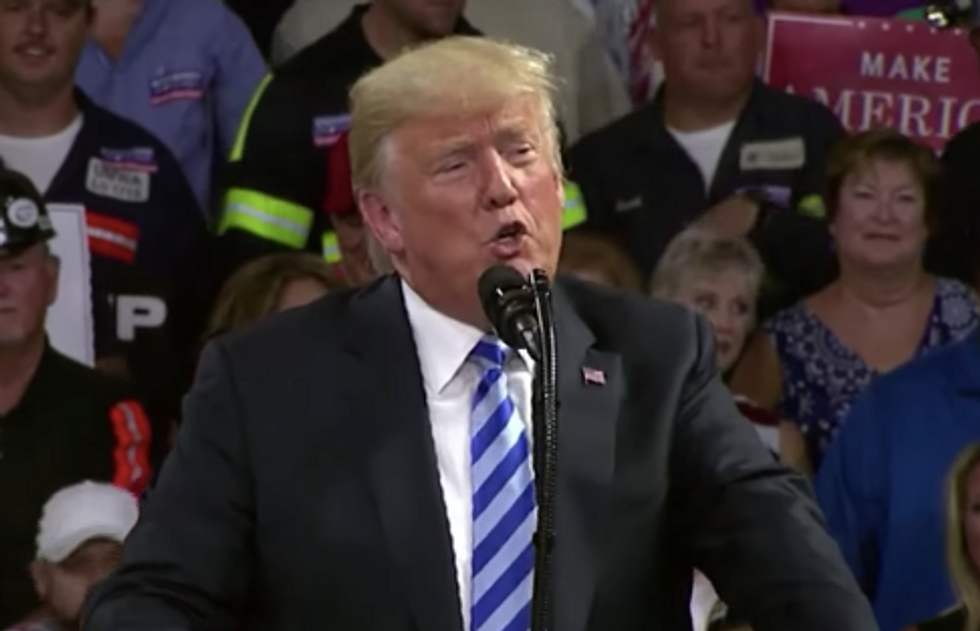 The events of Tuesday, August 21 are being met with very different responses from critics and supporters of President Donald Trump. On August 21, two of the president’s closest associates—former campaign manager Paul Manafort and his former personal attorney Michael Cohen—were either convicted of or pled guilty to eight federal criminal charges each. With Manafort, the charges he was convicted of included bank fraud and income tax evasion, and Cohen admitted to income tax evasion as well felony campaign finance violations. And while Trump’s critics see these convictions or guilty pleas—a total of 16 altogether on the same day, between Manafort and Cohen—as evidence of the corruption surrounding Trump and his associates, Trump’s diehard supporters have a totally different view. To Trumpistas, the legal problems of Manafort and Cohen and the Russia-related investigation headed by the U.S. Justice Department’s special counsel, Robert Mueller, are evidence of an anti-Trump witch hunt.

Trumpistas live in an alternate universe surrounded by “alternative facts,” to borrow an Orwellian phrase used by Trump’s advisor, Kellyanne Conway. While recent events with Manafort and Cohen could inspire Trump’s critics to vote Republicans out of office in the 2018 midterms, they could also inspire his hardcore supporters to go out and support the president by voting solid Republican in November. And pro-Trump voters will be motivated by other things as well, from abortion to the U.S. Supreme Court.

Here are five things that could motivate delusional Trumpistas to vote for pro-Trump Republicans in the midterms.

1. A Belief That Mueller Is Conducting a Mean-Spirited Witch Hunt Against Trump and His Associates

Trump has often used the term “witch hunt” to attack Mueller’s Russia-related investigation, and many of his supporters agree. To many Trumpistas, Mueller is a rabid Democratic Party partisan determined to unseat a democratically elected president—never mind the fact that Mueller is a conservative Republican who was appointed director of the FBI by President George W. Bush in 2001. And this mentality is evident in a commentary that Trump supporter Joe Hoft wrote for Gateway Pundit on May 27, when he denounced Judge Amy Berman Jackson (who will oversee Manafort’s second trial in Washington, DC in September) as a “liberal activist judge” who is “overly abusive to Manafort” and is determined to “negatively impact Republican chances in the election.” Hoft considers the Mueller investigation “a corrupt attempt by an elite few to overthrow the government”—and many Trumpistas who also think that way could be voting straight Republican in November.

2. A Determination to Pack the U.S. Supreme Court With Far-Right Ideologues

The Christian Right could care less if Trump allegedly had extramarital affairs with an adult film star and a Playboy model—as long as he supports tax cuts for the ultra-rich and nominates abortion opponents for the U.S. Supreme Court, they will enjoy his unwavering support. And Trump’s Supreme Court nominees—first Neil Gorsuch, now Judge Brett Kavanaugh—are exactly the sort of people far-right theocrats like Jerry Falwell, Jr., Pat Robertson and Tony Perkins favor: rigid social conservatives and “strict constructionists” in the vein of the late Antonin Scalia (who was ultimately replaced by Gorsuch). The Supreme Court will be a motivating factor for anti-Trump voters in November, but it will also be a strong motivator for Trump’s Christian fundamentalist supporters—and so far, so-called “values voters” have been very happy with his nominees for the Supreme Court.

3. A Never-Ending Obsession with Overturning the Affordable Care Act

Whether Republicans will lose or maintain the House of Representatives and the U.S. Senate in November will come down to turnout above all else. If Democrats do a good job getting anti-Trump voters to the polls in November, they might be controlling one or both houses of Congress in 2019. And one of the things that will motivate anti-Trump voters is health care; they’re absolutely disgusted with Republican attempts to end the Affordable Care Act of 2010 and deprive millions of voters of health care. But Trumpistas, on the other hand, are obsessed with ending the ACA—and they realize that if Republicans are able to increase their majorities in the House and the Senate, that could very well happen in 2019.

4. A Blind Hatred of Barack Obama

Truth be told, Barack Obama was a very centrist, middle-of-the-road president who—despite his populist rhetorical style—consulted Richard Nixon’s health care reform advisor from the 1970s (Stuart Altman), nominated a centrist for the U.S. Supreme Court (Merrick Garland), worked with a Bush-appointed Republican FBI director (Mueller), expanded the U.S.’ military presence in Afghanistan and gave the order that resulted in the death of al-Qaeda terrorist Osama bin Laden. But in the Trumpista fantasy land of “alternative facts,” Obama was the Muslim Leninist who did everything imaginable to destroy white conservative civilization—and even though Obama has been keeping a low profile in the Trump era, the irrational hatred that pro-Trump voters have for him is unending. Obama will no doubt be stumping for a lot of Democratic candidates as November draws closer, which could motivate Trumpistas who hate him to get to the polls and vote for as many Republicans as they can.

5. A Determination to End Legal Abortion in the U.S.

If Brett Kavanaugh is nominated to the U.S. Supreme Court, the Christian Right could very well realize a goal it has had for 45 years: overturning Roe v. Wade—and that obsession with ending safe and legal abortion in the U.S. will no doubt be on the minds of pro-Trump voters in November. Overturning Roe v. Wade wouldn’t automatically be a nationwide abortion ban but rather, would mean that abortion’s legality or illegality could be determined on a state-by-state basis. However, a Republican-dominated Congress could, post-Roe, vote for a nationwide abortion ban, which Trump would gladly sign into law. Protecting abortion rights will be on the minds of liberals and progressives in November, but ending abortion will be on the minds of pro-Trump voters. And whether the U.S. ends up with a pro-choice Congress or a pro-forced birth Congress in 2019 will depend on who doesn’t and doesn’t show up at the polls in November.