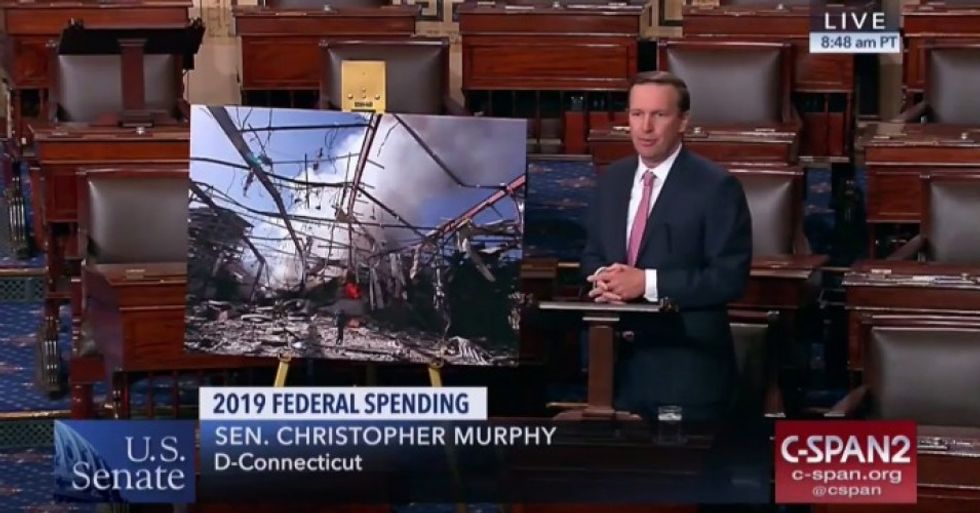 U.S. Sen. Chris Murphy (D-Conn.) on Wednesday denounced as "mind blowing" the decision to "continue to willingly participate in the slaughter of Yemeni kids" after Republicans objected to his amendment to the Defense Appropriation bill that would have put key restrictions on U.S. financial and othe support for the Saudi-led bombing campaign.

It’s just unthinkable to me that we continue to willingly participate in the slaughter of Yemeni kids when there is zero benefit to U.S. security. Mind blowing really. https://t.co/p6qbrfRGoe

The amendment "would cut off United States' support for the Saudi Arabia-led coalition's war in Yemen until the Secretary of Defense certified that the coalition's air campaign is not violating international law and U.S. policy related to the protection of civilians," a press statemnt from Murphy's office states.

Win Without War had called the amendment "our big chance to slam on the brakes and stop our role in enabling the suffering in Yemen." Yet Sen. Richard Shelby (R-Ala.), chairman of the Senate Appropriations Committee, objected to Murphy's amendment, despite saying that "what's going on in Yemen is atrocious."

Speaking on the Senate floor next to a photo of a Yemeni community center bombed when a funeral was underway, Murphy gave a damning assessment of the catastrophe the U.S. has helped fuel. "The United States is a key player in this bombing campaign," he noted.

"It shouldn’t be on our conscience as a nation to be part of this humanitarian catastrophe." Sen. @ChrisMurphyCT is 100% right: U.S. involvement in Saudi-led war in #Yemen is profoundly immoral and unacceptable. pic.twitter.com/GXqboofQJ3

In his floor speech, Murphy said that "the targeting of civilians inside Yemen is getting worse, not better," and referenced an event he said should underscore the urgency of his amendment—the coalition's bombing earlier this month of a school bus in Yemen that killed 40 children.

The amendment doesn't even put a full stop on U.S. support but merely requires "the administration to certify that civilians aren't intentionally getting targeted in contravention of U.S. law before we continue to support this funding," Murphy said.

"At some point we need to believe our eyes rather than the reports we get from the administration that the targeting is getting better," he said, yet the "problem is [that the coalition's] targets are [a] school bus, funerals, water treatment facilities." He said U.S. support, which includes military support and intelligence, makes it so that the coalition "can more effectively hit their civilian targets with the bombs that we are selling."

"The fact of the matter is the majority of the civilian casualties are caused by the side that we are supporting," Murphy said.

"The campaign is not expediting a political end," he argued. "It is prolonging the misery and giving more opportunity for our mortal enemies there, the terrorist groups to get stronger and stronger."

"We are radicalizing a generation of Yemeni children against us and that will have implications for U.S. National security for years to come," he warned.