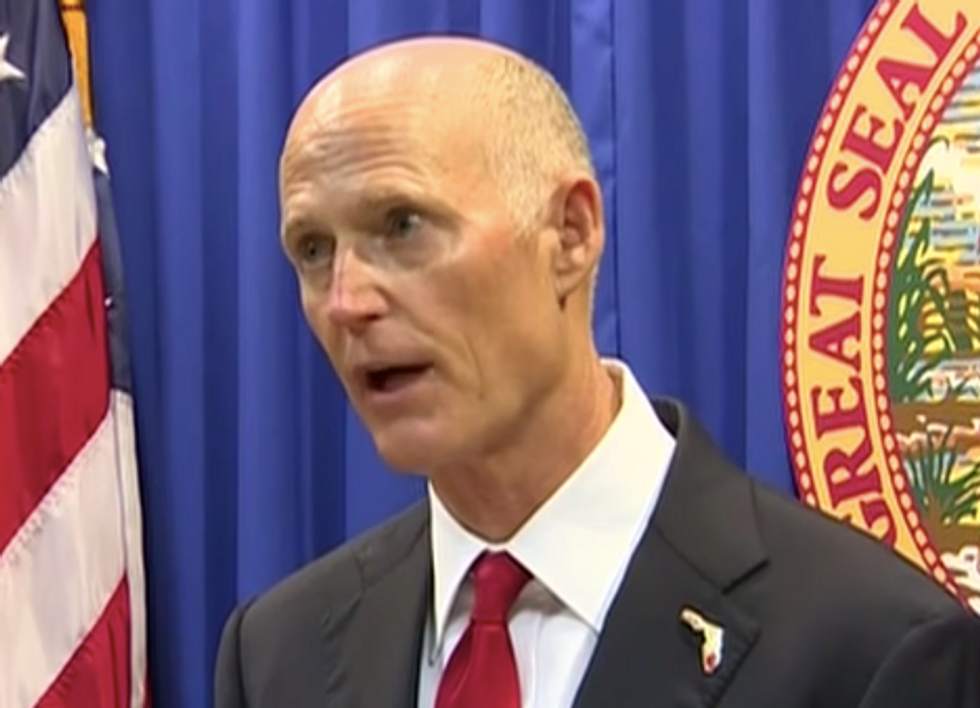 This is not going to help Florida Governor Rick Scott in his months-long effort to greenwash his despicable environmental policies. It came out just in time to frustrate his efforts to muddy the waters, so to speak, in his Trump-endorsed battle to unseat Democratic Senator Bill Nelson.

As many of you know, the discharge from Lake Okeechobee (laced with poisoned runoff from the sugar industry) gets released during the rainy season. It happens every year at this time (and even in winter, if it rains too much), and it is horrifying to witness. But this year the discharge is truly devastating both Florida’s Gulf and Atlantic coasts. The rivers that empty the lake, the Caloosahatchee and St. Lucie, are void of life. Any marine species that swims into the discharge dies. The water is green and thick with algae. Many of our waterways and beaches are nothing more than a graveyard with the bodies of fish, bottlenose dolphins, manatees, turtles, and whale sharks littered about. Who wants to go for a swim and see that?

The discharge to the Gulf coast has combined with a red tide, making it a grim reminder of how ecological devastation can impact a community. Property values are plummeting, the tourism industry is hit hard, people are getting sick from just breathing, and we are devastated at what we are witnessing in the ocean.

Rick Scott previously declared a state of emergency for the Lake Okeechobee discharges for affected counties on the Atlantic side, but it’s too little, too late for many Floridians.

Today, Rick Scott is nibbling on some crow. The Orlando Weekly blogger Colin Wolf has noticed that today’s State of Emergency to fight our current outbreak of red tide comes from a governor who “cut nearly $700 million from Florida's environmental agencies (many of whom oversee algae outbreaks)”.

Executive order 18-221 will allocate $1.5 million in funds to state agencies, including $100,000 to Mote Marine Laboratory to assist local scientists in saving distressed animals, $500,000 to Visit Florida to combat the horrible images of dead fish and $900,000 to Lee County to actually clean up the dead fish.

"As Southwest Florida and the Tampa Bay area continues to feel the devastating impacts of red tide, we will continue taking an aggressive approach by using all available resources to help our local communities," said Scott in a statement. "Today, I am issuing an emergency declaration to provide significant funding and resources to the communities experiencing red tide so we can combat its terrible impacts."

This is a very raw topic for me. I am having a hard time dealing with what I see in my social media feeds, so I don’t watch the videos of suffering and dead marine life that people post. I scroll quickly past the images of beauty destroyed.

I hope Rick Scott and the GOP controlled legislature go down in flames this November. Nobody deserves it more.

First came the red tide, a flotilla of microorganisms that dyed the sea rust and eventually stretched out along 100 miles of the Gulf Coast. Oxygen-starved fish, eels, dolphins and turtles littered beaches, in numbers too vast to count. In one marina, so many fish went belly up that they appeared to pave a walkway across the water.

The foul siege reached from Sarasota nearly to the tip of Florida by early June, when ecological insult No. 2 arrived. A green film of cyanobacteria appeared, as it regularly does in summer, in vast Lake Okeechobee. But this year the bacteria also spilled over into rivers and canals, which carried the toxic green sludge east to the Atlantic Ocean and west to the Gulf of Mexico. Already distressed Floridians gagged on the noxious odor, and more than a dozen people reportedly went to local emergency rooms after coming into contact with the contaminated water. Some wept as beloved manatees expired, bloated and tinted a ghastly green.

“Many people will tell you that this is the worst they have ever seen,” said Jacylin Bevis, a reporter with WBBH-TV, the NBC affiliate in Fort Myers. “It’s our entire south Florida coastline with the red tide and then with the blue-green algae on the rivers and canals."

The siege mentality has been exacerbated, because Floridians don’t feel they can turn to their regular refuge in broiling summers. “Living in South Florida in the summer and not having the beach as option is not a great place to be,” Bevis said.

Grist posted on this very subject.

Slimeballs could determine who wins a race for the U.S. Senate. And in this case, slimeballs isn’t another word for disgraced politicians or dirty-money lobbyists.

Slime is flowing off Florida’s Lake Okeechobee in balls, clots, and sheets into coastal waters. It’s made of algae that blooms in massive numbers when fertilizer-laden agricultural runoff sits in warm water. Rain raised the level of this fetid brew until officials had no choice but to send it downstream to the sea.

The environmental disaster is choking dolphins and strangling the tourism economy. It’s stinky, ugly, sad, and impossible for Floridians to ignore, and so it’s become a central element in the race for Senate between the incumbent, Democratic Senator Bill Nelson, and the challenger, Governor Rick Scott. Both blame the other for the crisis.