'Fudged': Trump Tells Bizarre Lie About His Own Interview Where He Admitted to Firing Comey Over Russia Probe 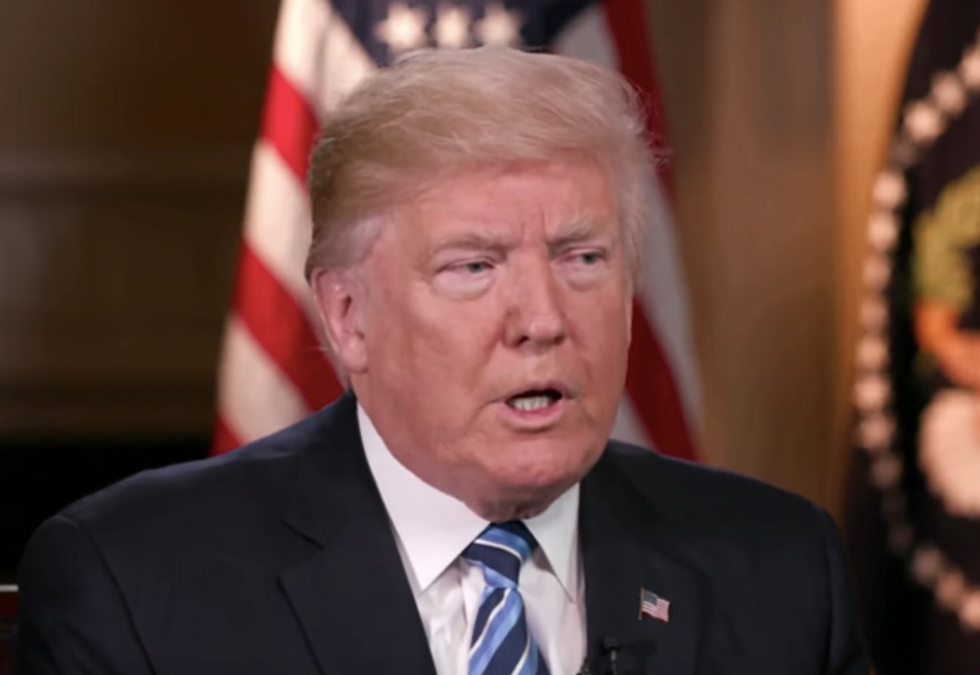 Donald Trump started the morning with a string of allegations, including accusing NBC and Lester Holt of “fudging my tape on Russia.” Which would appear to be a claim that Holt had somehow altered or edited the interview that he conducted with Trump on May 11, 2017, just after Trump fired James Comey. In that interview, Trump admitted that the reason for Comey’s firing was that he refused to halt the Russia investigation.

Trump: In fact, when I decided to just do it, I said to myself, I said, you know, this Russia thing with Trump and Russia is a made up story.

Since that interview, Trump has neither backed away from that statement nor made any public claim that Holt altered the interview. In fact, both Trump and attorney Rudy Giuliani have adopted the “article two powers” defense, arguing that Trump can fire anyone he wants for any reason. Why Trump is now making a claim that Holt “fudged” the interview in some way isn’t clear. It’s even less clear why Trump would believe that Holt already “got caught” fudging the interview or that it “hurt [NBC] badly.”

It’s possible that somehow Trump has conflated together that interview with Lester Holt over confusion about contradictory statements from Michael Cohen’s lawyer, Lanny Davis. However, in recent days, Trump has showed no hesitation to drag unsupported conspiracy theories from the depths of the alt-Reich web directly into his tweets—such as yesterday’s claim that China had hacked into Hillary Clinton’s email. Trump may be surfacing some alt-Reich claim that technology for modifying what people appear to do or say in a video, so called “deep fakes” were used to make him appear to say that thing that … he said, and hasn’t denied saying for over a year.

That’s just a guess. Sometimes Donald Trump’s morning tweets are a growl of semi-articulate rage from the great orange Bulk. More often, they’re point by point recaps of whatever Steve Doocy is saying at the moment. Honestly, we should all be grateful that Fox apparently gives Trump some sort of direct feed. Otherwise, half his tweets would consist of numbers we should all dial to Buy Gold Now. But on other days, and with increasing frequency, Trump’s tweets appear to be coming from the level so far down the hole the rabbits have been left behind. This is one of those mornings.

And the clearest message these fresh tweets deliver is: Trump is really, really afraid.

Why would Trump suddenly, more than fifteen months after it aired, be introducing the idea that Holt “fudged” the interview? The only clue might be the other tweets that Trump issued on Thursday morning.

It’s clear that Comey was on Trump’s mind. In addition to the comment about Holt, Trump fired off a separate tweet saying that “The only thing James Comey ever got right was when he said that President Trump was not under investigation!” Which is not something that Comey ever said, at least not in public. It’s something that Trump said Comey said, most notably in the letter he had a bodyguard drop on Comey’s desk while Comey was on the West Coast. It certainly seems significant that, like the Holt interview, Trump felt compelled to resurrect this old claim.

And in addition to attacking NBC, Trump also tossed insults at CNN’s management. He followed up with a tweet saying that the media in general is “totally dishonest” and “truth doesn’t matter to them.” Trump also makes a swipe at “fake books” before repeating his new, dangerous, Stalinist motto that the media is the “Enemy of the People!” This, together with his statement about the Holt interview, would seem to reflect a line Trump began pressing last month.

Trump: Just remember, what you are seeing and what you are reading is not what's happening, Just stick with us, don't believe the crap you see from these people, the fake news.

At the same time, Trump has attacked both Google and social media with claims that they’re filtering out his supporters. Trump has argued that sites like Twitter, Facebook, and Instagram shouldn’t attempt to stop hate speech or threats, and should instead let all statements come through. In that context, Trump’s accusations against Holt are just another brick in the wall of obfuscation Trump is building between Americans and objective truth.

It also seems quite possible that Trump’s new attempts to claw away what remains of reality might also be connected with another pair of tweets he issued this morning. The first was about how Ivanka Trump and Jared Kushner had “nothing to do” with pushing Don McGahn out of the White House. The second was about how excited Trump was at the person he was bringing in to replace McGahn. So excited, that he apparently forgot that person’s name.

Trump finished the first of these tweets by claiming that media reports of conflict in the White House are overblown, saying “They know that chaos doesn’t exist—just a ‘smooth running machine’ with changing parts!”

Just like when you’re driving down the highway, and your transmission smoothly drops to the asphalt.