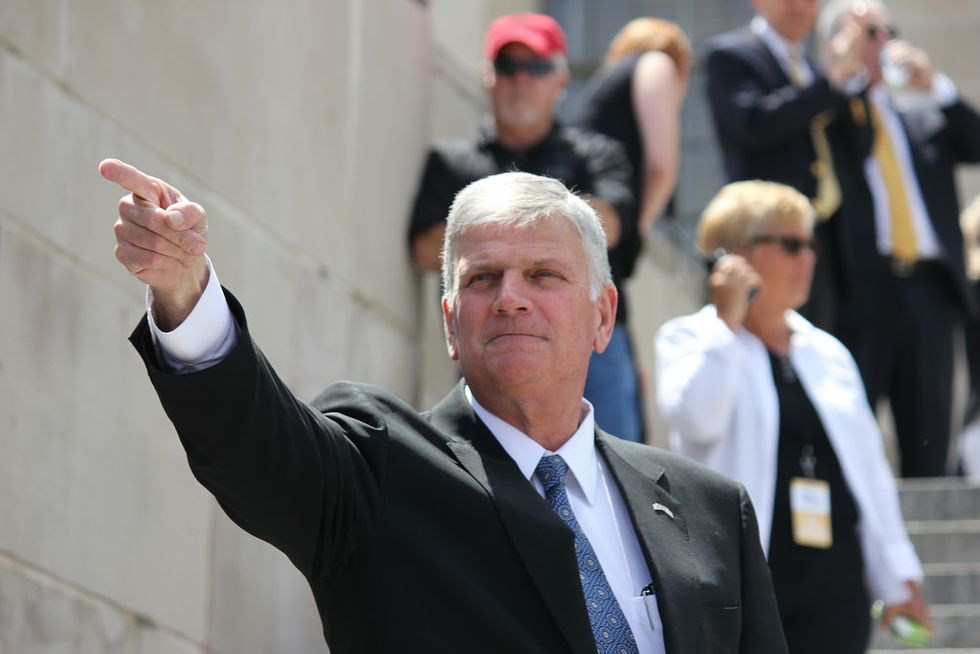 Franklin Graham is out with a new attack, this time on Chelsea Clinton.

Graham, a pro-Trump far right wing Christian evangelist and the son of the late Billy Graham,  tweeted out an article about Clinton's remarks at an event protesting Brett Kavanaugh, President Trump's nominee to the U.S. Supreme Court. Kavanaugh, if confirmed, is expected to be a vote to overturn Roe v. Wade, which made abortion legal.

In the article, at the far right wing Breitbart website, Clinton makes the argument that the legalization of abortion allowed many women to enter the workforce, adding trillions of dollars to the economy since "Roe became the law of the land in January of 1973."

Legalized abortion has allowed women to work and grow their careers, and start families if and when they want, and when they are financially able.

Graham, however, unleashed an astonishing rebuke, likening Clinton's views in support of the right to choose to Hitler's views on "killing the Jews."

.@ChelseaClinton, daughter of former President @BillClinton & @HillaryClinton, claims that legalizing abortion added trillions of dollars to the economy. What a lie. Hitler probably also claimed that killing the Jews would be good for their economy. 1/3 https://t.co/q381oYx7nP

Graham has targeted the Clinton family. Even though he excuses Donald Trump's affairs he blasted then-President Clinton for the Monica Lewinski affair.

He's also explained his defense of Trump over Clinton by saying, "These alleged affairs, they're alleged with Trump, didn't happen while he was in office."